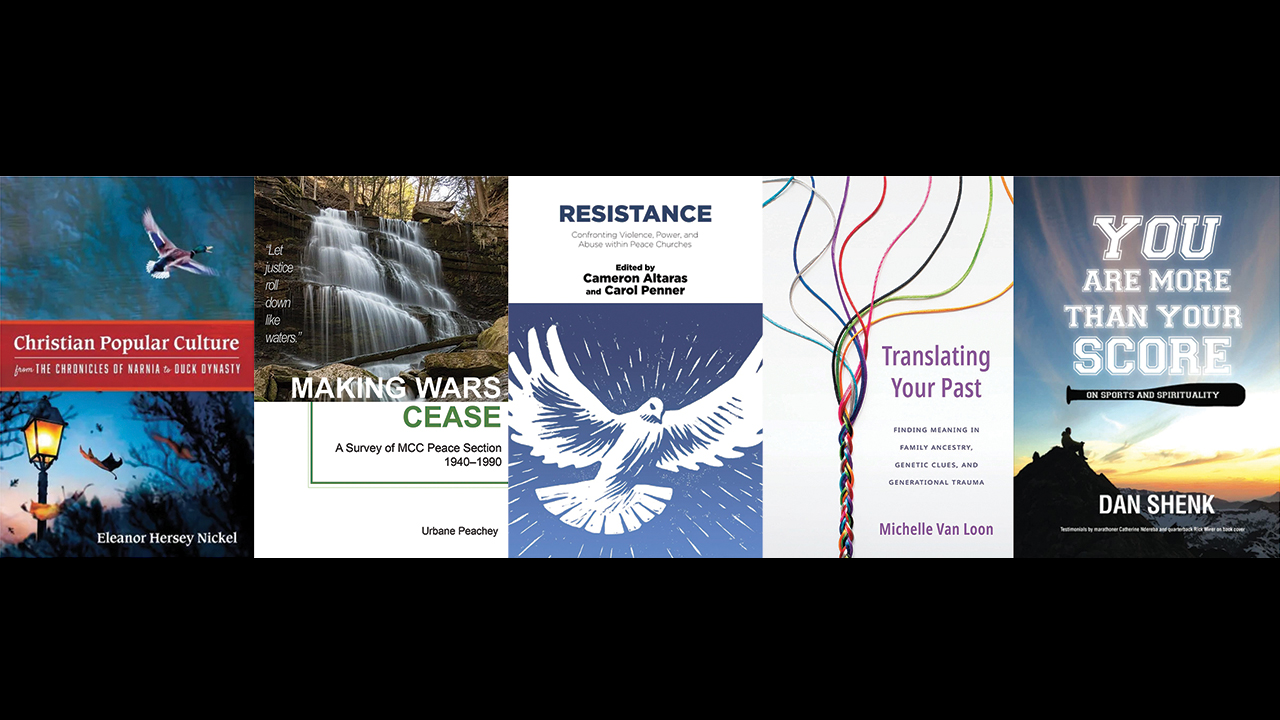 The Oct. 14 issue of Anabaptist World included several mini reviews of recent books. Some of them are nonfiction and history books.

In Christian Popular Culture: From The Chronicles of Narnia to Duck Dynasty (Cascade), Eleanor Hersey Nickel, a professor at Fresno Pacific University, examines books, movies and television shows popular with evangelical Christians through the lens of how they deal with race, class and gender. She begins with the role of Susan Pevensie in C.S. Lewis’ Narnia books and the film versions of them between 2005 and 2010. In the final book, Susan is left out of Narnia because “she’s interested in nothing nowadays except nylons and lipstick and invitations.” Nickel quotes scholar Susan Rodriguez: “In allowing Edmund salvation despite the gravity of his crime [betraying his siblings] but depriving Susan for a lesser fault, the texts underscore their bias in the male protagonists’ favor.” The films try to alter this bias by giving Susan more of a warrior role and making her more complex. Nickel calls the Left Behind novels “Rapture as male fantasy”: Chris­tian women have been raptured, leaving the unbelieving men to pursue pleasure and power while eventually getting saved. The women who are left are shallow and in need of men to save them. The movies alter this dramatically, as one of the women saves others from a plane crash. Nickel takes a more positive view of the films made by Sherwood Pictures, a Baptist-owned company whose films include Flywheel, Facing the Giants, Fire­proof, Courageous and War Room. These films, she writes, get better as Black and Latino characters move from sidekicks to protagonists. Nickel offers valuable analy­sis of works that have a great influ­ence on U.S. churchgoers. — Gordon Houser

In a year when Russia’s attack on Ukraine highlights war’s persistence, the appearance of a book titled Making Wars Cease (Masthof) is both timely and ironic. Subtitled “A Survey of MCC Peace Section, 1940-1990,” it documents a half century of Mennonite peace witness. The author, Urbane Peachey, was executive secretary of the section, which led Mennonite Central Committee’s peace ministries, from 1975 to 1986. Begun after Mennonites, Brethren and Quakers successfully appealed for exemption of their draft-age men from military service, the section’s lifespan matched the Cold War’s. During the draft era, which ended in 1973, Mennonites were grateful that conscientious objectors had an advocate in MCC. Less well known were its lobbying efforts to turn “the powers that be” away from war. Still, the section faced resistance from constituents who thought non­resis­tant Christians should not presume to tell the government what to do. It worked with ecumenical partners, as when the World Council of Churches in 1948 asked the historic peace churches for guidance on the theology of pacifism. Along with accomplishments, Peachey notes short­comings, including lack of attention to violence against women, racial injustice and economic inequality. — Paul Schrag

Peace churches harbor violence — a dissonant fact that Anabaptists are beginning to uncover and confront. Resistance: Confronting Violence, Power and Abuse in Peace Churches (Institute of Mennonite Studies), edited by Cameron Alteras and Carol Penner, gives voice to Anabaptists who have experienced violence: women preyed upon by men for sex or abused by a marriage partner; queer Mennonites shamed and shunned by their churches; people of color dehumanized by racist actions. The 34 writers address distinct features of Mennonite theology and culture — for instance, how the martyr story of Dirk Willems rescuing his pursuer might support an expectation that women should forgive men who’ve abused them (“Run, Dirk, run!”), told from the writer’s own experience of marital abuse. Along with diverse stories of violence in Anabaptist contexts, the writers offer essays on related topics: the Doctrine of Discovery, white supremacy, harm to LGBTQ people, wrongful use of power by church leaders and even “The Self Un­veiled: The Dis-integration of Mennonite Women’s Head Coverings.” And there are testimonies of hope, as the formerly downtrodden claim power to move toward transformation. These truth-telling essays confront injustice and build empathy for survivors. — Paul Schrag

“Interpreting our past gives meaning to our present,” Michelle Van Loon says in Translating Your Past: Finding Meaning in Family Ancestry, Genetic Clues and Generational Trauma (Herald). Translating one’s past is not so much about documenting ancestry as about “becoming more fully the people we were created to be.” From biblical genealogies (Genesis alone has nine), Van Loon shows the negative effects of generational trauma, but not in a way that feels hopeless. Stressing the impor­tance of dealing with the past, she offers guidance on breaking out of ancestral negative behavioral patterns and recog­nizing strengths in our lineage. Chapters on adoption, race, ethnicity and religion broaden the look at how our communities shape us. Van Loon, a Christian with a secular Jewish heritage, analyzes how these identity-shaping factors affect how people perceive others. She cites research on DNA to show how generational stress and trauma are heritable and must be dealt with. This is an excellent book for anyone interested in interpreting family history or understand­ing the present effects of past trauma. — Dana Neff

Like a church potluck, You Are More Than Your Score: On Sports and Spirituality (Author Academy Elite) brings more than enough for everyone. Part sports fan’s journal, part anthology of sports stories, part testimony of a spiritual journey, Dan Shenk’s winsome miscellany coalesces around the idea that having fun sustains the spirit. If he overestimates how much you might want to know about his golf scores and chess games, he’s a pleasant companion down the rabbit trails. With stories from athletes and fans, and his own experiences as both, Shenk observes how sports intersect with spirituality. Dozens of stories, many of Mennonites, tell of over­coming adversity and finding spiritual growth through physical and mental competition. Shenk offers heartfelt insights about spirituality unrelated to sports, including descriptions of 32 spiritual disciplines and reflections on 50 favorite songs and hymns. In 31 appen­dices, he explores golf, baseball, chess, music and theology with stories that range from just for fun to inspiring and aston­ishing. Men­nonite sports fans — and hymn singers, marathon runners and Scrabble players, to name just a few — will find much to savor at Shenk’s buffet. — Paul Schrag