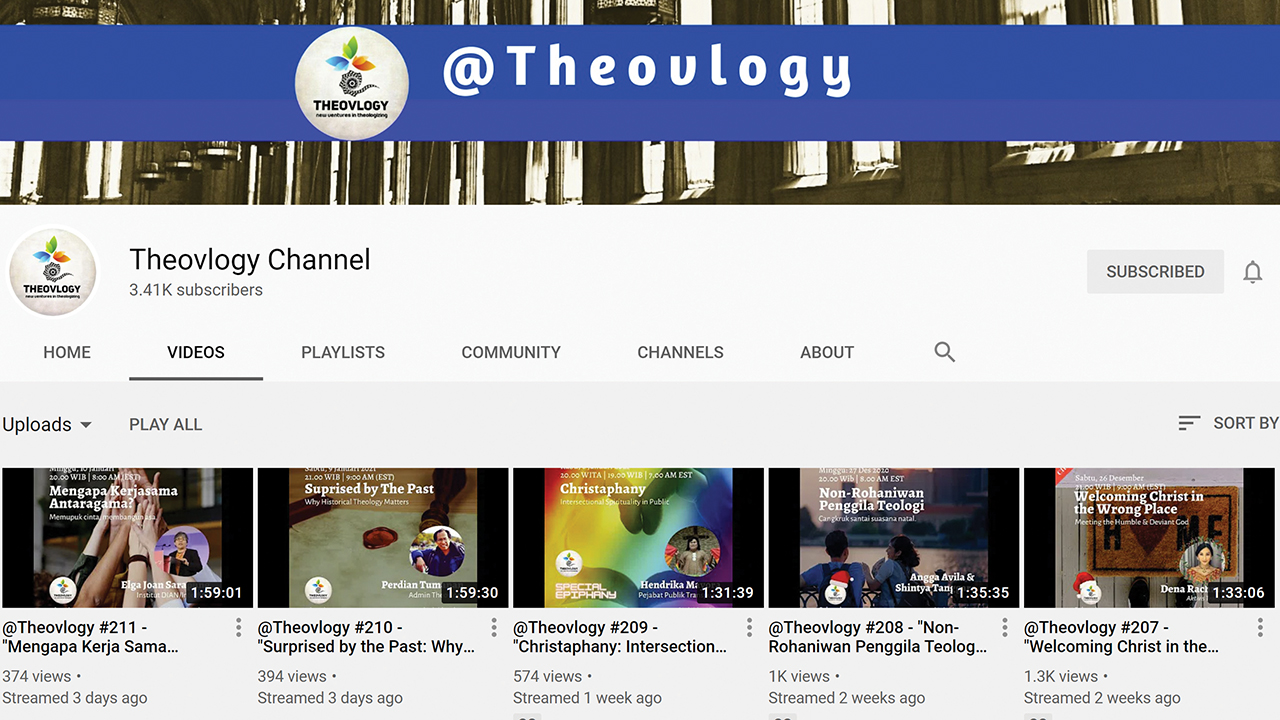 Theovlogy is a video blog or “vlog” that developed a following an international following of 250,000 in about two years. — Theovlogy

Nindyo Sasongko believes theology should be publicly available to a wide audience. His “Theovlogy” experiment in online discussions began in November 2018.

When the pandemic hit, the online theology discussion channel increased in frequency to meet the demand for online means of connecting. The concept started as a video blog, known online as a “vlog,” which is in the middle of “TheoVLOGy.”

“The initial purpose was to be for laypeople who don’t have background in theology in Indonesia,” he said. “We started with 15- to 20-minute episodes on theology matters accessible to a general audience. Later on, we find out that our audience grew, not only from Indonesia but also my colleagues.”

A theology professor and doctoral candidate at Fordham University and theologian in residence at Manhattan Mennonite Fellowship in New York, Sasongko invited fellow theology students from Indonesia and around the world to join him in humble conversations. Three of the six founders are Mennonites: Sasangko and theology student Adi Widya Nugroho were raised in the Anabaptist Gereja Kristen Muria Indonesia (GKMI) church in Indonesia, where Sasonko is an ordained minister; Perdian Tumanan is studying at Anabaptist Mennonite Biblical Seminary in Elkhart, Ind.

That meeting grew into “Theovlogy.”

Concerned about accessibility for those with poor internet connections, Sasongko converts the recordings to audio for podcasts. But he sees the barriers of access melting away. During the pandemic, people in rural Indonesia sometimes have a better connection than he does in New York City.

“Theovlogy” was launched into English — and a wider audience — at Mennonite World Conference’s 2019 Global Anabaptist Peacebuilding Festival in the Netherlands, when participants spoke with Mennonite historian Ben Goossen.

“We wanted to provide a non-elite form,” Sasongko said. “We invited bachelor’s degree students with passion in theology, people writing a paper that got published.”

Before the pandemic, organizers were busy with schoolwork, and six months passed without a new episode. Then lockdowns began in March 2020, and everyone had time at home. “Theovlogy” revived. Soon Sasongko learned about other podcasts in Indonesia following its example.

“Through this podcast, we learned that we created community,” he said.

Hosts and guests interact with the audience during a live question-and-answer session and through feedback on recorded sessions. The audience includes people none of the originators have ever met before, even across religious traditions.

“This is a safe space,” Sasongko said. Hosts and guests talk about faith and religion “without being judged by doctrine, dogma or rules.”

“Our audience can have access to theological matters that they did not expect before,” he said. “Many of our audience expected theology as a defense of faith, apologetics.”

But the podcast showcases different views of theology, experiencing how it can be approached from a collegial, conversational and hospitable point of view.

“Theovlogy” has hosted a Muslim scholar and an agnostic as guests.

“At Manhattan Mennonite Fellowship, we invited a Sufi practitioner to talk to us,” Sasongko said. “He had his disciples watching from Indonesia.”

Another time, a Jewish rabbi invited his colleagues to watch.

“In this sense, I can see this is a Mennonite way of providing reconciliation,” Sasongko said, noting even a remote, screen-mediated experience can provide a connection — the sense of community Anabaptists believe is imperative to church.

Online services have helped churches break down barriers in a new way, making it possible for people around the world to participate in church together.

“This might be what the Apostle Paul says: In Christ all boundaries are broken down; there is no Jew nor Greek (Galatians 3:28),” Sasongko said. “. . . I see that this might be the future of the church. There is an openness that isn’t there in person in four walls.”