The family moved to Halstead in 1937, where he graduated from Halstead High School in 1939. 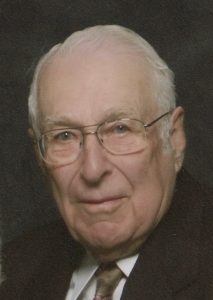 They made their first home in Halstead. A year later, he was drafted and served as a noncombatant during World War II at an army hospital in Oxford, England, till 1945.

After the war they made their home in Newton, where he worked for the rail mill and then for Kansas Gas & Electric Co. from 1946 to 1986, retiring at age 65. They lived in Newton from 1947 to 2002, when they moved to Kidron Bethel Village. After retirement, he and Vera enjoyed spending the winters in Arizona. They made these trips for 22 years. Family times were always important, especially for holidays and special occasions.

He and Vera made several memorable trips. They traveled to Hawaii for their 40th wedding anniversary and attended Mennonite World Conference in Strasbourg, France, which also included a two-week trip to the Holy Land.

He liked doing woodworking projects in his garage shop and made many wooden toys for his grandchildren.

He was preceded in death by his wife of 72 years, Vera, in 2013; and his sisters Hunora, Rosetta, Velma, Darlene and Annetta.