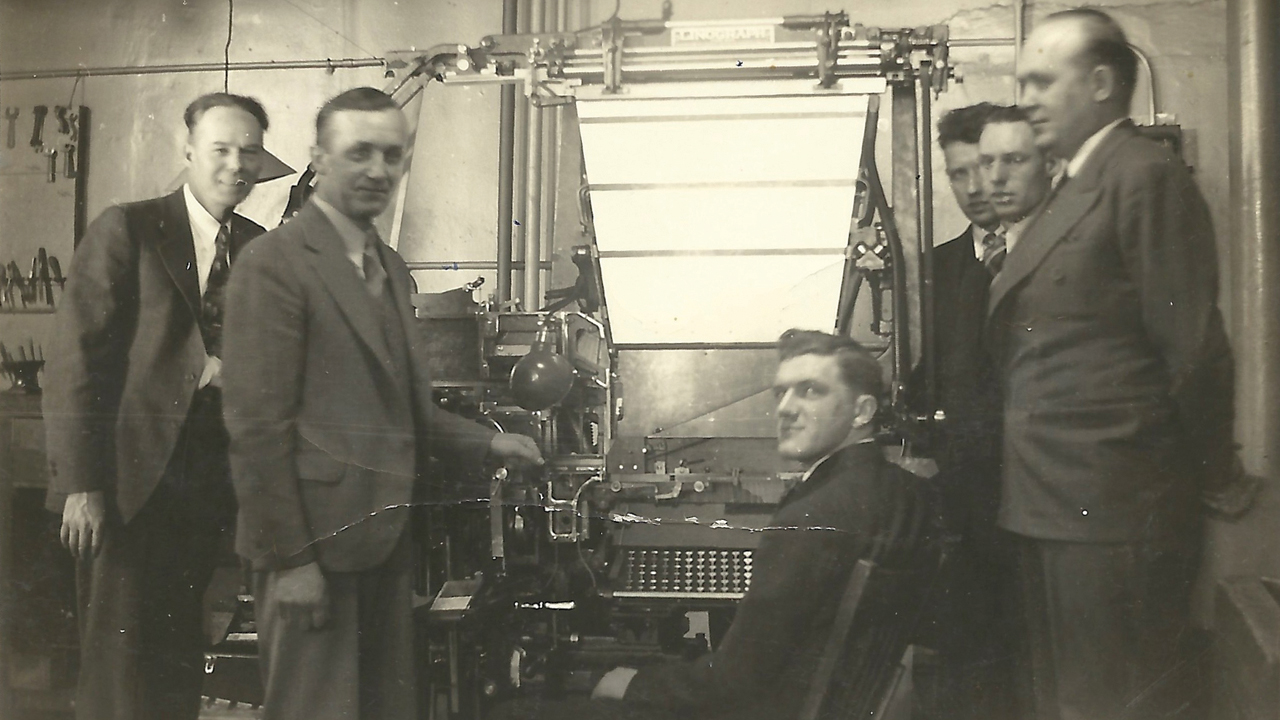 Anabaptist World is new, but its roots run deep. We can trace its ancestry back to 1864. This is relevant to understanding the publication you are reading.

To fully appreciate Anabaptist World, you need to know its provenance. Its identity and mission flow from the converging streams of two Mennonite denominations — and an independent newspaper that bridged the gap between them.

You probably know Anabaptist World is the product of a merger — a union of The Mennonite and Mennonite World Review. What you might not know is that the merging of Mennonite periodicals is not a novel idea. In fact, this is the third merger on the path that has led to this magazine’s birth.

Anabaptist World’s family tree took root 156 years ago when John F. Funk founded Herald of Truth — one of a host of printed materials that rolled off his presses at Mennonite Publishing Co. in Elkhart, Ind. Over its 44 years of existence, all under Funk’s leadership, Herald of Truth came to be recognized as the unofficial magazine of the “old” Mennonite Church.

But not all MC leaders appreciated the way Funk did business. They started a rival magazine, Gospel Witness, in 1905. By that time, Funk’s publishing firm was in trouble. A 1903 bank failure had forced him to declare bankruptcy. Then a 1907 fire destroyed half his property. Reluctantly, in 1908 he sold Herald of Truth to the denomination’s new Mennonite Publication Board — and the first merger in Anabaptist World’s ancestry came to pass.

The new magazine’s name, Gospel Herald, retained half of each previous title and was chosen almost by default. “It was not fully decided that this name should be accepted,” a committee reported, “but for convenience sake it was allowed to stand on condition that no better name can be found.”

The title stuck for 90 years, and many developed a deep affection for it.

From 1908 to 1943, Gospel Herald was edited by Daniel Kauffman, a towering figure who defined orthodox theology for “old” Mennonites from his editor’s chair and his role on 22 denominational committees.

Kauffman’s editorial prowess established Gospel Herald as the official voice of the Mennonite Church and built the reputation of Mennonite Publishing House in Scottdale, Pa., as the denomination’s intellectual center.

Meanwhile, another branch of Anabaptist World’s family tree was growing in the General Conference Mennonite Church. In 1885, Nathaniel B. Grubb founded The Mennonite, initially a publication of the Eastern District Conference. In 1893 the entire General Conference adopted it as the denomination’s official English-language magazine, alongside the German Christlicher Bundesbote.

Two generations of Grubbs edited The Mennonite — Nathaniel from 1885 to 1891 and Silas, his son, from 1916 to 1936. In 1937 the place of publication moved to Bethel College in Kansas, where the new editor, John R. Thierstein, taught.

The move to Kansas, where the magazine found a long-term home in Newton in 1947, made The Mennonite a neighbor to another ancestor of Anabaptist World — Mennonite Weekly Review.

Founded in 1923 in Newton, MWR filled a need that its founder, Henry P. Krehbiel, perceived for an independent newspaper that would link different streams of Mennonites — notorious sectarians who typically regarded other branches of their faith with suspicion, or simply knew little about them.

MWR was the English counterpart to a German paper, Der Herold, which had debuted three years earlier as the flagship title of Herald Publishing Co., the independent, nonprofit firm Krehbiel managed.

H.P. Krehbiel and his nephew Adolf Krehbiel, MWR’s first editor, envisioned something very different from a denominational magazine. MWR would be a community paper rather than a church paper, covering “everyday interests that are little touched on by official church publications,” they wrote.

Indeed, what about those other publications?

Under the headline, “Review No Competitive Move,” Adolf Krehbiel noted that people had asked, “Will this new paper conflict with The Mennonite?”

The fact that he cited The Mennonite — rather than the MC Gospel Herald or the Mennonite Brethren Zions­bote — showed that the Krehbiels were thinking mainly of readers from their own denomination, the General Conference Mennonite Church.

Adolf Krehbiel promised there would be no rivalry with The Mennonite because MWR would “not limit its field to General Conference Mennonites” and “aim at more general, or perhaps secular, news originating in Mennonite circles.”

For decades it did just that. And it evolved — in content, becoming more of a church paper, and in reach, growing beyond the predominantly Kansas and GC readership of its early years to a national circulation among Mennonites of various conferences, “old” Mennonites and Mennonite Brethren especially. This growth happened under the leadership of Menno Schrag, editor from 1935 to 1969.

Like The Mennonite, MWR had multiple generations of involvement by one family. When Menno Schrag retired, the Herald Publishing Co. board appointed his son, Robert M. Schrag, as editor.

Menno Schrag’s retirement prompted a prophetic word from Maynard Shelly, editor of The Mennonite. Reflecting on the future of Mennonite publications in his March 19, 1969, editorial, Shelly wrote:

“The forms and expressions of the church’s witness are being tested as never before. We believe God will prevail, though we know that not all of our human institutions will survive. Church publications are being tested, and other forms may replace us. . . . One hopes that some of our separate Mennonite publications will be united in the not too distant future, and we would be happy to have the MWR share in that reunion.”

From 1971 to 1986, The Mennonite was edited from Canada, where a large percentage of GC members lived, by Larry Kehler and then Bernie Wiebe.

In the three decades that followed Shelly’s editorial, a process of cultural change and a building of trust across Mennonite dividing lines — which began with the founding of Mennonite Central Committee in 1920 and blossomed after World War II — picked up speed and led to the second merger in Anabaptist World’s family history.

Already MCs and GCs had drawn closer as MC members shed external markers like distinctive clothing, as congregations adopted double affiliations, and as the denominations began sharing a seminary campus in 1958 and a hymnal in 1969.

Rapprochement gained momentum as GC and MC members gathered for joint assemblies, first at Bethlehem, Pa., in 1983 and then at Normal, Ill., in 1989, when delegates voted to explore a merger. At Wichita, Kan., in 1995, they decided a union should happen.

It took another seven years to complete the merger, but the publications moved more quickly. Gospel Herald and The Mennonite united in 1998, adopting the GC magazine’s name and the MC magazine’s editor, J. Lorne Peachey. The new version of The Mennonite would lead the way to the founding of Mennonite Church USA in 2002.

The Mennonite’s editors recognized MWR had played a role in the MC-GC union and in the warming of relationships among Mennonites generally. In the Feb. 22, 2000, issue, they counted Menno Schrag among the 20 most influential Mennonites of the 20th century. They judged that other than Civilian Public Service (the World War II alternative service program for conscientious objectors) and MCC, “nothing has done as much to link U.S. Mennonites of various stripes” as MWR.

The next 20 years, up to the present day, brought challenges for The Mennonite and MWR that led to the third merger in this story. A trend of circulation decline, which squeezed the resources of print publications as readers and advertisers migrated to digital media, prompted a rethinking of MWR’s identity as a weekly periodical. In December 2007, MWR skipped a week for the first time, ending a streak of more than 4,300 weekly editions, and the editors announced a 48-issue schedule for 2008.

MWR became biweekly in 2012, and the name was changed to Mennonite World Review.

For The Mennonite, a painful outcome of the decline of denominational publishing was the closure in 2011 of Mennonite Publishing House, its longtime home (counting the Gospel Herald years). In 2010 The Mennonite switched from twice a month to monthly publishing.

Acknowledging it was not financially sustainable to continue to compete for many of the same readers, donors and advertisers, Mennonite World Review Inc. and The Mennonite Inc. began considering a merger in March 2017. By June 2019 approval was secured, and Sept. 1, 2020, was set as the date for the beginning of Anabaptist World Inc., an independent company committed to continuing the missions of both predecessors.

Good observed that the new organ­ization’s slogan could be “Anabaptist World: merging since 1908.”

A ministry with a history of connecting people separated by distance and tradition but joined by faith could do worse than be known as a maker of mergers.