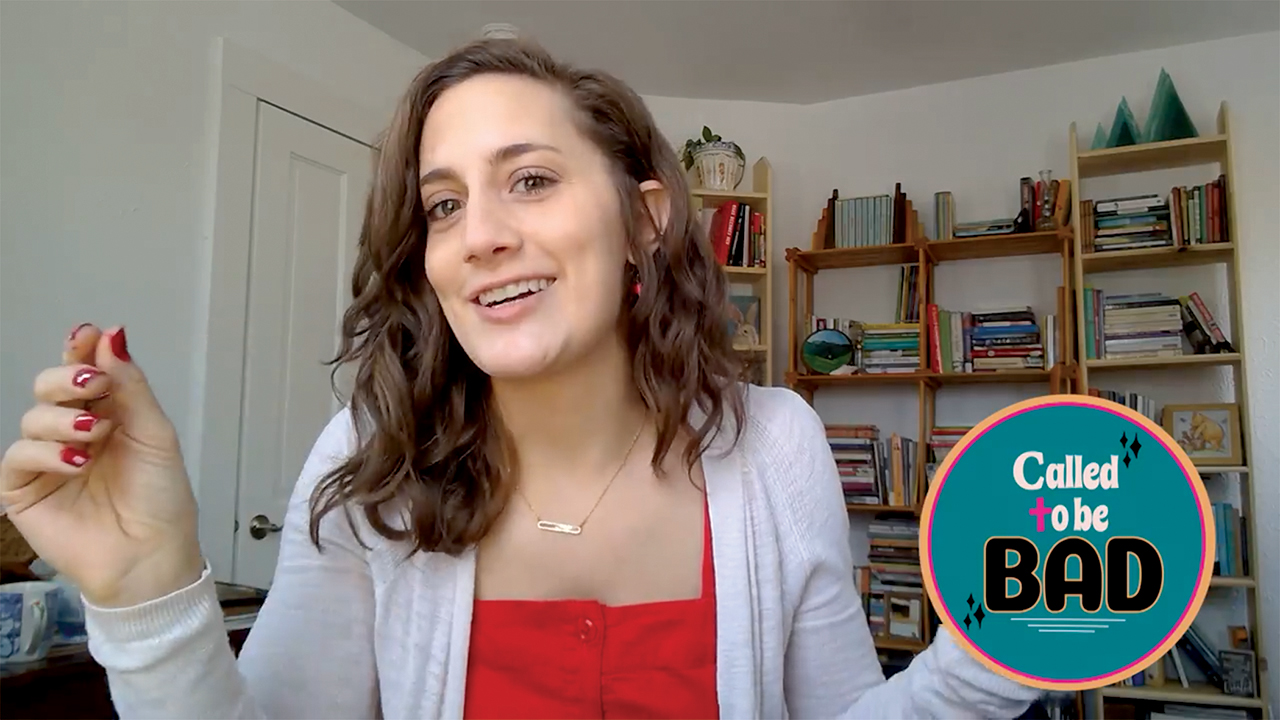 Mariah Martin, pastor of Bonneyville Mennonite Church in Bristol, Ind., records a podcast in her home. She launched the first episodes in March. — Mariah Martin

Indiana pastor Mariah Martin found there were certain sensitive topics she couldn’t explore well in front of her congregation. Her solution is a podcast open to the world.

“Called to Be Bad” digs into the intersections of good and bad, pure and profane, holy and ordinary. Martin, pastor at Bonneyville Mennonite Church in Bristol, launched the podcast on March 8 with the first episodes of conversations she recorded with more than two dozen guests during the COVID pandemic.

Episodes feature seminary professors, pastors, denominational leaders and even normal people talking about things that make many people uncomfortable or could be seen as, well, strange.

“The podcast was not intended to be just for pastors,” she said. “But maybe God is calling each one of us to something unexpected, something we may have labeled as bad, simple, wrong, deviant, taboo. . . .

“I want to do this because the church isn’t always ready to tackle the topics I want to talk about.”

Early episodes have focused on humor, wealth, biblical womanhood and foul language. Down the road, everything from bad sermons to death-­metal music is fair game.

“I have found that people are just waiting for the right forum to talk about these topics,” Martin said. “I create this space and they’re like, ‘Oh my goodness, I’ve been dying for someone to ask me about something.’

“I’m not twisting their arm to talk about something they don’t want to, but this is bubbling up inside them.”

“We don’t talk about wealth in the church, and when we do, we do it on a real superficial level but will not talk about wealth and poverty and our responsibility as a church,” Millsaps said in the podcast, touching on the end goals of investing and what Jesus had to say about personal accumulation and interactions with the poor. “We spend a whole lot of time dodging that conversation.”

Ted Swartz shared about comedy in the first episode. His new organization, the Center for Art, Humor and Soul, is also the podcast’s sponsor.

“We want to be open-minded, and we want to be curious about how the soul is expressed,” he said about supporting the project, in an interview with Anabaptist World. “There’s a broadness to it, and I think Mariah’s foray into authenticity is really important.”

He hopes “Called to Be Bad” can help people and institutions become more vulnerable and honest.

“When [resistance to those things] becomes pathological, and when we can’t be ourselves at any level, when it has the trappings of our faith, that becomes a very serious thing if we can’t be all of who we are,” he said.

In his episode on “bad words,” Allan Rudy-Froese, associate professor of Christian proclamation at Anabaptist Mennonite Biblical Seminary, commiserated with Martin about how people apologize for swearing around a pastor.

“When we have these conversations, I think part of this goes with a new kind of honesty about life, that perhaps your generation and the ones younger, we’re just a bit more honest and a little bit less interested in surfacy kinds of realities, and I think that swearing is a part of this,” he said in the podcast. “We want to be honest, and sometimes that honesty — the best word for it is a swear word — a concept that needs to be alerted in our body.”

Although Martin did not set out to make a statement about authenticity, the gap between how people act in everyday life and how they act in church turns up in episodes. One of the things that inspired her is the angst she has faced as a young woman three years into a pastorate.

“I would get in my car and turn on the radio and think, ‘If my parishion­ers knew the kind of music I listened to, they would think I’m not a good pastor.’ That’s where this idea of good and bad came from,” she said.

“I want to talk about the more real stuff because that’s more interesting. That’s a byproduct, not an intention, that I ended up talking with authenticity. I just think it’s a more captivating angle.”