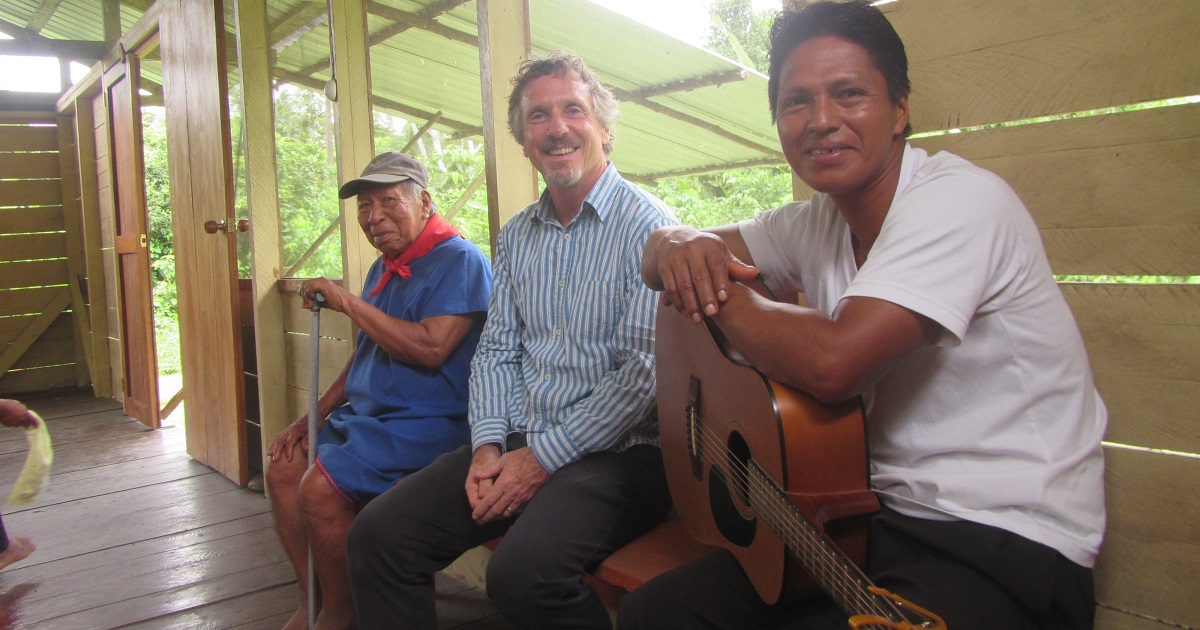 Sheldon C. Good, executive director of The Mennonite, Inc., interviewed Jerrell Ross Richer about the 2019 wildfires in the Amazon rainforest. This is an edited version of that interview.

Jerrell Ross Richer is professor of economics at Goshen (Indiana) College and an international service worker for Mennonite Mission Network. Jerrell and his wife, Jane, spend the first six months of each year living in the Ecuadorian rainforest with their family, accompanying indigenous church and community leaders. They return to North America for the second half of each year to share what they have learned in the global South with congregations and other groups in the North. In the fall, Jerrell teaches courses in global economics at Goshen College and global sustainability in the Collaborative MBA program.

1. Wildfires are raging in the Amazon rainforest right now. Reports indicate more than 156,000 fires in the Amazon so far in 2019. What’s causing these fires? What makes these fires unusual and important?

The fires are seasonal, but seem to be much worse this particular season due to changing weather patterns and migration from urban areas. As people from the cities seek a better life in the rainforest, they often fell trees and set fire to the downed timber to plant crops and graze animals. The combination of dryer conditions and the clearing of primary forest for human settlement is changing the landscape in ways that are devastating to the native peoples who have inhabited the forest for centuries.

2. You are a professor of economics. What role does economics play as you think about both the cause and effect of these wildfires?

There are clear economic gains for people who clear the forests with chain saws and fires. They can sell the lumber, plant corn and soybeans, or graze cattle. But there is no market for the ecosystem services that a healthy, vibrant forest provides. Forests provide the planet with oxygen, fresh water, temperature regulation and habitat for wildlife and humans without charging us anything. It is too easy to take this for granted and assume the earth will continue to provide a healthy and beautiful place to live for the foreseeable future. As forests are destroyed and these services are lost, society suffers and economic losses mount.

3. Why is the Amazon in general, and these wildfires in particular, important in the fight against climate change and for conservation efforts?

The Amazon rainforest, often referred to as the lungs of the earth, contains massive stores of carbon. In fact, the Moriche palm forests near the village where we live and work in eastern Ecuador actively remove carbon from the atmosphere, transforming carbon dioxide gas in the sky above into peat moss at their roots. We need to protect these living machines that are capable of healing some of the harm caused by burning fossil fuels. But the market will not do this as things now stand. We need people of faith to step forward and show the world that the planet God created and called good is worth protecting.

4. You spend half of each year teaching college students and the other half accompanying indigenous churches and communities, including the Cofán people, in the Amazon rainforest in Ecuador through Mennonite Mission Network. What have you learned about how to care for creation from the Cofán people? What is the impact of the Amazon—and wildfires—on people’s livelihoods?

The Cofán have taught me that humans are not separate from nature. We are an integral part of the living systems of this planet and have the capacity to do good as well as to do harm. The Cofán who live in the village of Zábalo decided decades ago to prohibit extractive activities on the 400,000 acres of primary forest that surrounds their village—no crude oil, no mining, no commercial hunting, no fishing, no logging. Their hope is to keep this part of the rainforest, which I see as an example of the earth as God originally created it, pristine and productive. The Cofán depend on the forest for their livelihoods and the land is their source of wild game, fish, fruit and materials. Without the forest, Cofán are no longer Cofán.

5. Those of us in the United States may wonder what we can do in response to something seemingly so out of our control so far way. Psalm 24 says “the earth is the Lord’s and all that is in it.” How are we as Anabaptists to respond to the Amazon wildfires?

Anabaptists can offer a powerful witness and respond to what they hear in the news through the wise use of their time, talent and resources. We have a long history of acting in ways that may seem countercultural to others but are consistent with our distinct values and convictions as followers of Christ.

Here is one idea: We can voluntarily account for the carbon dioxide we release into the atmosphere through what I call “carbon on-setting.” As we eagerly await national policies that will one day require everyone to be carbon-responsible, we can respond to God’s love for us and the time and talent we have been given by estimating the damage we do by burning fossil fuels and paying it forward to organizations that are actively protecting the Amazonian rainforest. One such group is the Cofán Survival Fund, which raises funds to send teams of native park guards from Zábalo and neighboring communities deep into the rainforest to ensure that no extractive activities are happening on Cofán land. These are the same lands that are actively sequestering carbon, and we can partner with the people who live there to become part of the solution. If you want help with your carbon calculation, visit the Earth Deeds website page that my students and I helped create as part of a class project last fall.

For those who would like to go one step further, consider visiting the rainforest as part of a Learning and Fellowship Tour. Each year we take groups of Anabaptists—church members, youth, college students, retirees—to visit the village of Zábalo. Our Cofán neighbors established the world’s first community-based ecotourism program decades ago and are eager for people to visit. Given their refusal to allow commercial exploitation of Cofán land, visitors from North America provide one of their only sources of income that is both dignified and just. The tours also help connect members of the global church—North and South—through worship and sharing together. For more information, email here.

From left: Mauricio Mendua (village elder), Jerrell Ross Richer (Mennonite Mission Network) and Hiter Yiyoguaje (leader of the Zábalo community church) sit together after a worship service. Zábalo is a Cofán-speaking village of several hundred inhabitants located along the Aguarico River in eastern Ecuador. The Aguarico River is a tributary of the Amazon River. Photo by Jane Ross Richer.