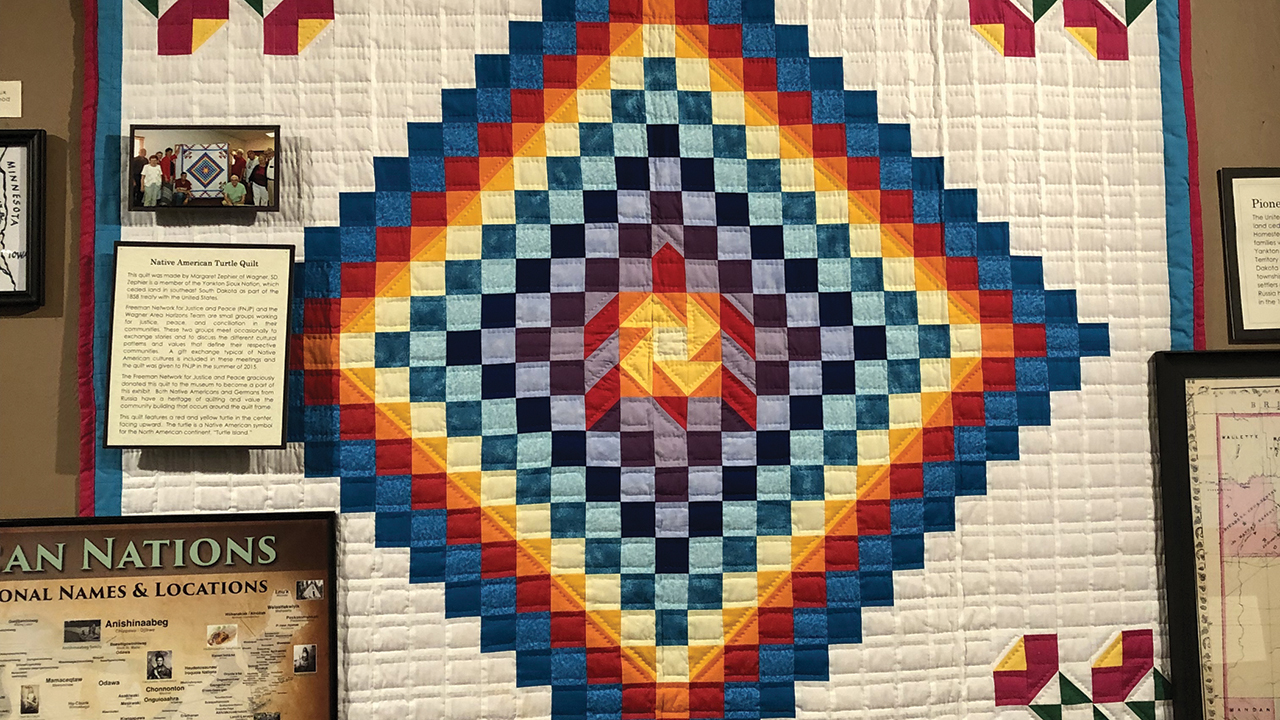 This quilt, featuring a turtle at the center, was gifted by East River Horizons, an Indigenous group in Wagner, S.D., to the Freeman Network for Justice and Peace. It hangs in the Freeman Heritage Museum. — Jenelle Ortman/Scattered Seeds

Grown men can learn from very little children, for the hearts of little children are pure. Therefore, the Great Spirit may show to them many things which older people miss. — Black Elk

This quote is taken from the foreword of a children’s book, The Medicine Quilt, Inspired by a True Story (Archway Publishing, 2021).

Author Margaret Doom wrote a ­story of hope and light for “those born of that land” and “those who came to it,” referring to Native Americans and the others who now call the land home. Illustrations by LaShawn Medicine Horn give the book color and life that appeal to children.

It’s a story of truth. There is no peace between the two groups and a reluctance to even talk about division. This causes consternation for all and even impacts the health of the land.

In the book, a grandmother from those born of the land and another from those who came to it come together to talk and pray in their individual ways. The idea of a quilt is born, and from that symbol and the questions of children the next generations learn what it takes to move ahead and give hope to all.

Both ethnic groups have rich quilting cultures. The theme of making a quilt was inspired by a real event.

Two groups of people — East River Horizons of Wagner, S.D., and Freeman Network for Justice and Peace — had been meeting together for several years. A relationship developed through fellowship and food, with each group taking turns hosting.

The Peace and Justice group suggested Irene Schrag make a quilt in appreciation for the friendship. The quilt was gifted to the Wagner group.

The Horizons group presented a quilt in return. It has found a home in the Freeman Heritage Museum.

The Medicine Quilt celebrates author Margaret Doom’s adopted grandmother, Margaret Zephier, her wisdom and the many obstacles and experiences she endured. The two Margarets had many conversations about forgiveness and forgiving, which young Margaret expressed on paper at an early age.

These conversations, plus more of the younger Margaret’s experiences, morphed into the story, which was published last year. Grandmother Margaret, also talented in quiltmaking, created the quilt now on display in Freeman.