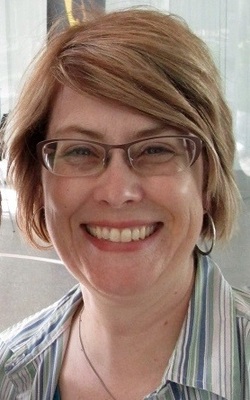 Naomi sang. Her voice exhibited confidence and a rich tonality. It was the first thing I noticed when Naomi and I sang together in choir. We were both second sopranos, but it was clear which one of us was the superior vocalist. I’ve always had to work to distinguish harmonies, whereas Naomi exhibited a well-practiced ease at teasing out our part in the most difficult of arrangements. I continually found myself—during practices and performances—listening for her voice so that I could match her pitch.

It’s an apt image for our relationship. Just by exercising her God-given gifts, Naomi enabled me to call forth my own.

On New Year’s Day, Naomi’s voice fell silent, muted in this life by the cancer permeating her brain. But the melodies I heard her sing still live on in my head.

Fourteen months ago, when I first met Naomi, I was just learning how to find my pastoral voice, and she was in charge of ensuring that I was not theologically off-pitch. Among her many roles in Ohio Mennonite Conference, Naomi chaired the conference’s Credentialing Ministry Team as I was coming into my first pastorate. Anxiety characterized my initial interaction with Naomi, but the tone she established in that first meeting did much to dissuade my fears.

When I joined the pastoral staff at Central Mennonite, I also joined the sisterhood of Mennonite pastors in northwest Ohio. Naomi championed women in ministry, and as the newest clergywoman in the area, she intentionally made herself available by offering her wisdom and listening to my questions. Once, at choir, when I mentioned that I was struggling to put together a sermon on Miriam, Naomi suggested that I try preaching a character—or first-person—sermon. Then she offered to go to lunch with me to discuss the sermon and passed along her entire folder of character sermons so that I could get a feel for the possibilities the format possessed. Now, every time I preach a character sermon, it will be with her example in mind.

Naomi’s care went beyond my ministry to include a sincere interest in my personal aspirations and well-being. Since I was a single woman new to the area and ministry, Naomi opened her home to me for meals and encouraged me to find a solid group of friends. I’d share with her my academic interests, and she’d listen carefully and ask insightful questions. I also knew that I could go to her as a source of prayer and wisdom. Even as I write this, I feel the impulse to speak to Naomi and seek her help in discernment. As a result of her interest, I now find myself acting and speaking personally and professionally with more confidence, because that’s what Naomi saw and inspired within me.

In the brief array of memories I have with Naomi, one stands out with resounding clarity. I visited Naomi at home a couple of weeks after her diagnosis. As we caught up over tea, I shared my excitement about an upcoming conference I was to attend, as well as my anxiety over some medical tests that awaited me upon my return. “Are you scared?” she asked. I replied, “Yes,” and she held me and offered words of comfort. In comparison to her terminal illness, my issues were small, but Naomi’s compassion was undeterred. In the minutes that followed, we prayed for one another. I recall that afternoon, trying to catalog every moment, because I knew it was a holy time, one for which I am continually thankful.

Naomi Engle was my colleague, mentor, and friend. She will be missed by the Archbold/Wauseon communities, countless friends, and by her congregation at West Clinton Mennonite. Naomi will especially be mourned by her family: her husband and co-pastor, Jesse; daughters Anna, Marie, and Grace; son-in-law Ben; grandchildren Naisa and Yonah; as well as her father and siblings.

The naturalness with which Naomi sang the song of Christian life and ministry is one that I endeavor—in my own voice—to match in pitch. The song she sang was of the advent of God’s Kingdom inaugurated in Christ.

It was encapsulated in the final song sung at Naomi’s funeral, and is the one with which I would like to close this tribute:

Beyond the dying sun I saw a vision on the sea

Of golden sails full billowed in the wind.

And echoing above the waves a voice called after me,

“God’s dwelling place is with you to the end.”

I see a new world coming when everyone is free!

And all shall be God’s people in justice, love, and peace. 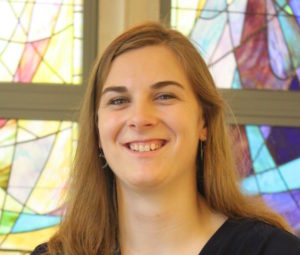 Regina Wenger serves on the pastoral team at Central Mennonite Church, Archbold, Ohio, where she focuses on education, worship and outreach. Additionally, she may be found studying history, drinking coffee, and cheering for Duke basketball.