Welcome back from Christmas break!

This week I watched the DVD What a Way to Go: Life at the End of Empire which simply and succinctly points out the fatal flaws in the myth of salvation by progress and growth that are at the core of our culture. It lays out the case of why the North American life style is unsustainable for humans and all of creation through interviews with scientists, artists and activists.

I believe it’s imperative that we hear and understand the message of this movie. So for those of you who won’t watch it, I’ll summarize some of it’s key points. The first section is a look at four different ways in which we are reaching the limits despite our best attempts to ignore them. 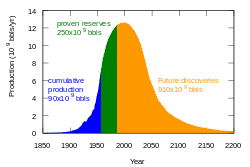 The concept of peak oil is one of the simplest of the four to explain and the most difficult to deny. Oil companies are not finding enough new oil to make up for how much we’re using. At some point in the in the next few years, oil production will flat line. In other words, peak oil is the day when we will not be able to produce more oil then we did yesterday. Oil will still be produced, but it will not meet the ever increasing demand of our ever increasing consumption.

The documentary points out that reaching peak oil won’t just mean higher gasoline prices. Oil is integrated into every aspect of our lives. For example, the agricultural system today inputs 10 calories of fossil fuel every 1 calorie of food that comes out. Compare that to farming in 1940 when roughly 1 calorie of fossil fuel was used for each calorie of output. Guess what happens to our food system when oil prices go through the roof? Imagine this happening in every industry and you begin to get an idea of the impact.

You’ve probably already read plenty about climate change (aka global warming) so I won’t go into it much other then to share one new detail that I hadn’t heard before. According to the documentary, excess carbon is already being absorbed by the ocean and creating carbolic acid. This increases the acidity of the ocean, with a direct impact on plankton, which are at the bottom of the food chain in the ocean. They also produce half the oxygen we breath.

Today, mass extinction is already becoming a reality. Scientists estimate that in the 1900’s between 20,000 and two million species became extinct. According to scientiests interviewed for the documentary, ¼ to ½ of all species on the planet will be extinct by the end of the century if we continue at current rates. Most of this is due to humans using up habitat and resources that were formally used by animals.

You’ve heard of the rainforests being cut down, but did you know that humans use up 2/5ths of all productivity on the planet, including 1/3 of the ocean’s production each year and half of available fresh water. As a result of competition from humans, overfishing and loss of habitat, most predatory fish are down to 10% of normal levels.

Stuart Pimm, Professor of Conservation Ecology at Duke University points out that the earth will eventually recover from mass extinction, but that it will take millions of years. What does that mean for future generations? “Trillions of people will live in a biologically impoverished world if we don’t take action now” says Pimm

As with climate change, you’ve probably heard at one time or another of the concept of overpopulation. The earth has a carrying capacity, or a limit to the number of people it can sustain. William R. Catton, one of the scientists interviewed for the film, believes that the earth has already passed that carrying capacity for humans and that we are in overshoot, beyond our limits.

When we think of overpopulation we usually think of a far off poor country like Bangladesh. What a Way to Go points out that the biggest problem is the amount of resources used per capita in a given country. This means that in the US, our 250 million people has contributed far more to exceeding the earth’s carrying capacity than the billion people living in India.

So what does population overshoot mean in practical terms? Sooner or later, ecological limits will reassert themselves, probably when a new infectious disease develops to take advantage of our overpopulation. The only question is, will we let it happen catastrophically or take steps so that global population is reduced in an ethical, thoughtful way.

How all this happened.

These four limits and their implication are frankly, pretty depressing. How did we end up in this situation in the first place? After all, knowing how we got into the situation in the first place is a pretty important part of figuring our way out. What a way to go does an excellent job of laying out the myths and stories in our culture that have created the illusion of no limits.

Unfortunately, I’ve come up against my own limits and I’ll have to save further analysis of the myth of progress for Review of What a Way to Go: Life at the End of Empire, Part 2.