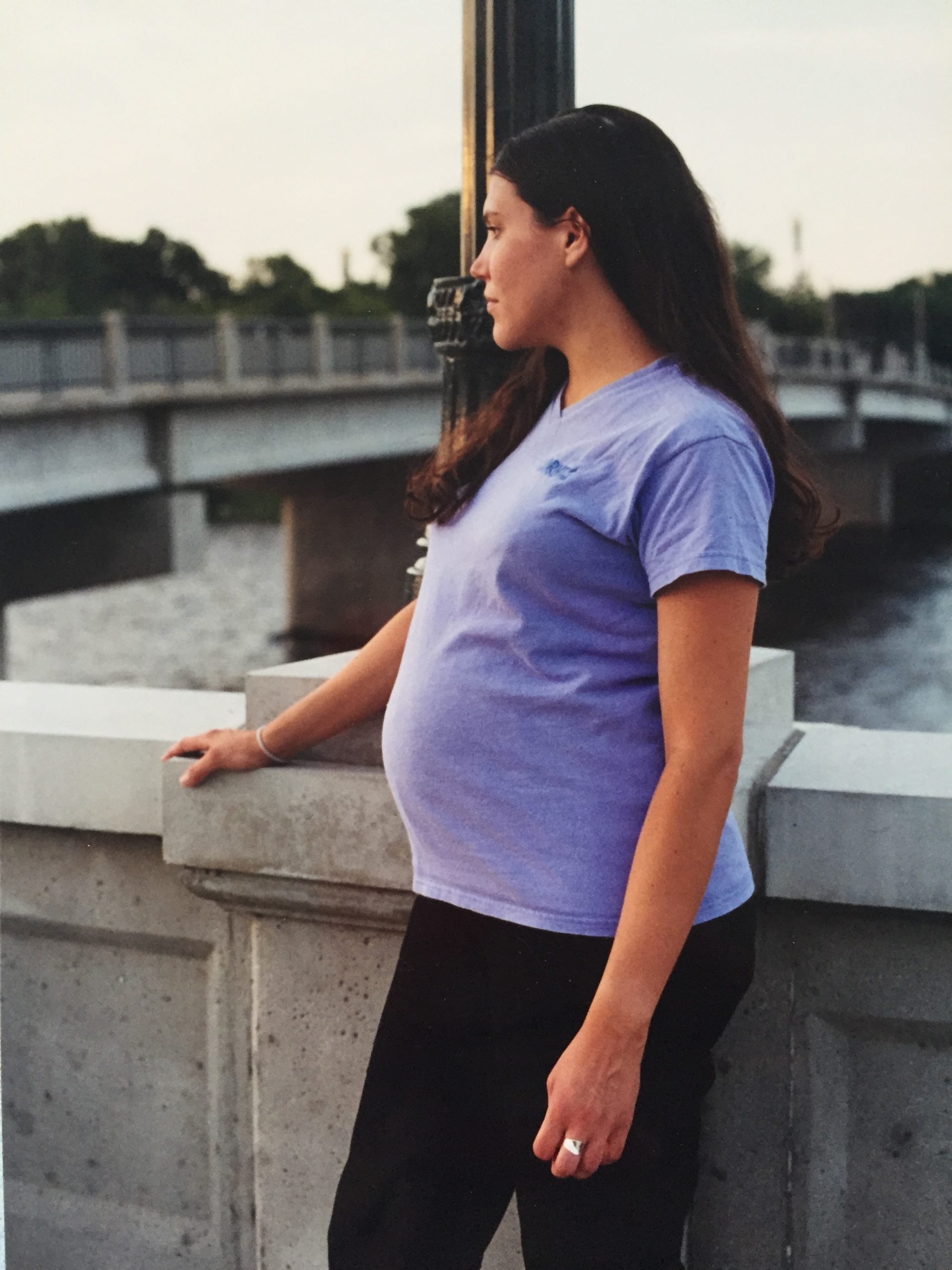 Claire DeBerg is a member of Emmanuel Mennonite Church in Minneapolis, Minnesota. This piece was originally published in the October issue of The Mennonite magazine, focusing on the theme, Shaped by Scripture. Read more original articles or subscribe today.

“When they had brought their boats to shore, they left everything and followed him.” Luke 5:11

I love the pain found in the story of Jesus calling the first disciples in Luke because it takes me back to my unwanted pregnancy.

I first felt the baby when I was resting during my three-mile walk along the Cedar River in Iowa. The melting snow had caused the river to swell and edge over the banks, flooding the path at one point. The trail that cut around the Cedar River is a path I walked every morning with my sister during my pregnancy. We walked every day because every day I had to face the truth that I was growing a human I did not want. But the morning I felt the baby move I happened to be walking alone.

When I reached the shallows—the part of the river with frequent floods and bordered by houses built on stilts—the walking path was impassable. It lay nestled under water as though a large glassy tabletop had been rolled across the path. I tried skirting the water, but it seemed the river had not actually spilled over the bank but seeped up from the ground to form a lake of sorts.

So the arc I made through the woods was large and added time and lots of barriers for me to climb between, through, around. As I pushed myself over the trunk of a fallen tree and stepped down to the other side, my body front-heavy, I sat down and thought of Simon the fisher. I watched the ducks quake quietly and push around the glassy water tabletop. I heard the rush of the brown river swim with broad strokes. When my heart slowed and I settled into my repose, I felt my baby nudge my stomach as though tapping me awake from a dream. And suddenly there were two people sitting on the tree stump, and I looked around me but found no one else to corroborate that truth. Just me. And the baby.

That movement in my inner waters had me sit a bit straighter and lean my ear toward my core, hoping to hear an answer—the question every moment being, Should I keep you or give you? While I waited for the answer, the ducks seemed content in their new, still water. They didn’t pace around the edge like a cat on a ledge but just walked right in. Were they aware that the water that used to send them shooting downriver was now transformed, stilled and solemn yet the same?

So my baby and I sat at the edge of the floodwaters, and I wondered aloud with an aching anger about what had become of me and that river. Is this what abundant life is, God?
Abundance in that moment seemed to flood the path and ruin the plan. I can’t remember the end of the walk that day, but I know there were not distinct answers from God about keeping or giving or why those ducks would choose a quiet temporary lake instead of the bustling, fast-moving river they seemed to love so much. The answers came months later, but sitting there I finally understood why I was so drawn to the first men Jesus called as disciples—those men devoted to fishing.

Jesus was in Gennesaret by a lake, and people loved hearing him talk about God, so they were pressing around him. In his practicality, Jesus looked for an escape from the crush and noticed two boats on the shore, so he jumped in an open one. Simon agreed to push Jesus a bit from the shore to give him some space. From there Jesus could sit and rest and still share God’s word with the crowds. After his talk, he said to Simon, “Put out into the deep water and let down your nets for a catch.” Simon, though, was tired because he and his had crew fished all night and caught nothing, but he was willing to indulge Jesus, so he pushed out. Simon rowed into deep water with Jesus, put his nets down and got a huge haul. There were so many fish he called his buddies for backup. And even after the second boat arrived, the catch was so massive that both boats began sinking under the weight. We’re talking splashing water, slick, slippery fish, creaking wooden boats, astounded men and breaking nets.

Amid the amazement and adrenaline, Simon asked Jesus to leave him because he felt unworthy of the miracle of all those fish. Meanwhile, the other fishermen were slack-jawed at what must have been the biggest catch of their lives. Then Jesus said to those men: “Do not be afraid; from now on you will be catching people.” And the story ends with, “When they had brought their boats to shore, they left everything and followed him.”

And it was that moment that finally caught me as I sat by that flooded walking path. I was caught in that moment—just like those men—the moments between when they’re sitting in their sinking boats getting their new job titles and when they reach the shore. It is the smallest of moments in the stories of Jesus—like a blink so you almost miss it. It is written that when they had brought their boats to shore they leave everything. But what about the moments when they’re not yet to shore? The rowing moments, the small space of time before they reach the water’s edge? That is the space that captured me, the most faithful and doubting follower of the Way.

What must those men have been thinking? Here they were with a catch that would no doubt boost their income and be cause for a bodacious celebration. And there on the shore waiting for them would be their wives and mothers and girlfriends and children, probably cheering and tearing up. Their brothers and fathers and fellow fishermen were no doubt part of the crowd or summoned to see the miracle catch of fish. Perhaps those men rowed slowly, savoring the salty taste of their huge catch even for the briefest moment.

They were caught. I’d like to think a few of them were not real thrilled about the unusual title Jesus gave them. And in those moments I imagine the power that eventually surged in their arms as they got closer to the shore—the power they must have felt in knowing they could choose and finally choosing to leave everything.

Everything they knew, they left: their jobs, their families, the feast, their friends, their lake. They had good options—they’d grown up by the water and were doing what they always knew they would do: fish. But Jesus opened up a new possibility for their lives, and it hurt and it was good—it was abundance.

So when I was pregnant 15 years ago with a little water baby spinning in my belly and was not sure if I could choose to be a mama, I lived my days being Simon in the boat with a new possibility emerging for my life that was both scary and good. And like those men so long ago when they realized who Jesus was, I spent most of my pregnancy in awe of the miracle of this baby and my serious unworthiness of its gift of grace. I rowed my sinking boat slowly during pregnancy because I thought the shore was full of goodbyes I didn’t want to face. And when I arrived at the shore, when that baby girl appeared, I did leave everything. I left my plans, my pride and simple ideas, and it hurt and it was good. She was good. She was the abundant life.

The answer for my life was to not say goodbye to the dark-haired little girl I pushed from my core. The answer for me was to pull my boat up and get out. It was to choose motherhood and accept my village’s support. The answer was that leaving everything might be wonderful—that the rush of a huge catch gets all the attention, but once you settle in you are stilled enough to feel the signs of an abundant life tapping you awake from deep inside. 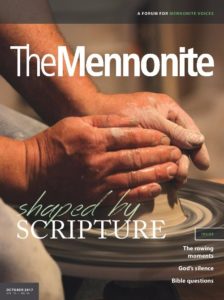 This piece was originally published in the October issue of The Mennonite magazine, focusing on the theme, Shaped by Scripture. Read more original articles or subscribe today.