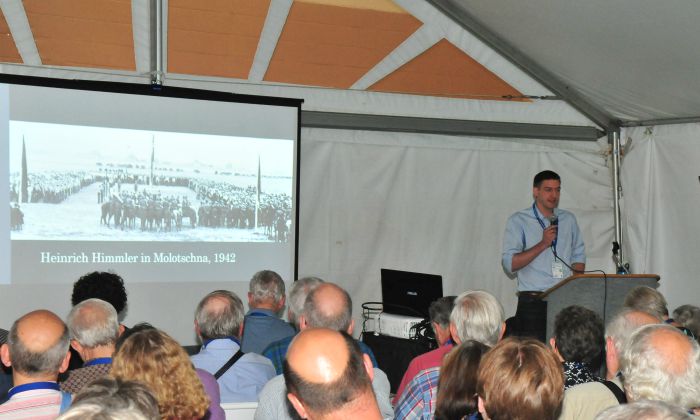 Photo: Ben Goossen shows a photo, “Heinrich Himmler in Molotschna, 1942,” during his workshop, “From Aryanism to Multiculturalism: Mennonite Ethnicity and German Nationalism, 1871 to Today.” Photo by Dale D. Gehman for Meetinghouse

An influential chapter of 20th-century German Mennonite history that has been predominantly either romanticized or glossed over received significant attention in back-to-back workshops by historians July 22 at the Mennonite World Conference assembly.

Ben Goossen of Cambridge, Mass., has spent six years studying the relationship of Mennonite identity and German nationalism. Using materials from archives in North America and Europe, the doctoral student at Harvard University has found evidence he says outlines how the rise in Mennonite ethnic identity was built on and supported the rise of Aryanism and the Nationalist Socialist—or Nazi—movement.

Already by 1933 “racial biologists” seeking to define ideal specimens of humanity had examined Mennonites in multiple countries, in Europe and the Americas. Goossen said Mennonites submitted quite willingly and took it upon themselves to produce extensive racial knowledge by delving into genealogy.

He showed an image of a 1934 Mennonite ancestor list carrying the image of a swastika rising from the sea, illuminating a brighter dawn.

“The general consensus was surprisingly uniform,” Goossen said. “The Mennonites, according to these scientists, were more Aryan than the average German.”

Goossen said Mennonites found the “science” appealing because it was useful. As benefits increased for those with the right look, the consequences grew direr for those without.

On the Eastern Front, Mennonites who remained in their genetically pure colonies in what is today Ukraine were happy to see the cruel Bolsheviks pushed back.

Based on their experiences, they were happy to leave the Soviet Union, following their Wehrmacht liberators on the Great Trek west.

When they arrived in places such as occupied Poland, they passed through intense racial testing before receiving special rights as ethnic resettlers, accessing homes and farms taken from Poles or murdered Jews.

Goossen said SS documents cite “Mennonites were the outstanding example” of avoiding kinship with their surroundings.

“For 400 years they had supposedly created a racially pure community with pure blood lines,” he said. Nazi propagandists were also impressed by Mennonites’ ability to prosper in pockets around the world while retaining a German language and identity.

But then the war ended and the population of Germany was devastated. Mennonite Central Committee set up a refugee program to help people flee Europe.

The only problem—after claiming all those benefits based on German ethnicity, someone had to prove Mennonite refugees were not Germans. United Nations guidelines excluded Germans from refugee programs because they were considered to be the war’s instigators.

“But MCC had an answer,” Goossen said. “According to MCC they were not Germans at all, but Mennonites.”

MCC made multiple official reports claiming they were pacifists who didn’t aid the military or the National Socialist Party.

“This was false,” Goossen said. “Virtually all Mennonite males fought in Nazi regiments, whether they volunteered or were forced.”

After the war the idea of “Mennonite ethnicity” blossomed and grew through the 1940s and ’50s, transitioning from what had been a religious identity.

Things progressed to the point where one can be considered “Mennonite” despite not being a member of a Mennonite church.

Goossen said the distinction has managed to persist. Most German or Dutch names, complexions and ancestral backgrounds are still considered—just under the surface— “more Mennonite” than others.

“What does it say about the nature of a denomination,” he asked, “when a white nonbeliever could be considered more Mennonite than a devout believer in another part of the world?

“ … We have a long history of congratulating ourselves about rising above the petty violence of the world … when so much of our history is predicated on the practices of exclusion.”

He cited the scant support offered by white Mennonites for African-Americans during the civil-rights movement. He noted how female victims of theologian John Howard Yoder’s sexual abuse were also ignored or even silenced by church leaders.

He mentioned LGBTQ individuals at Mennonite Church USA’s convention earlier in the month feeling that they are not as welcomed and loved as heterosexuals.

“It’s important to understand that playing ‘The Mennonite Game’ [and celebrating traditionally Germanic ethnic relationships] means having something in common with Nazi race scientists,” he said.

Asked what can be done to mend painful and exclusionary beliefs, Goossen suggested Mennonites today have the ability to tear down what those race scientists worked so hard to build.

“Notions like ethnicity are social constructions. They are not set in stone, so we can do what we like with them,” he said. “… We’re not bound to identify with them as we receive them from our parents and grandparents.”

Earlier in the afternoon, German Mennonite Historical Society PresidentAstrid von Schlachta described her group’s project to collect memories and accounts of German Mennonites living under and participating in National Socialism.

Two years ago the group sent out a questionnaire with a good response rate, and the society is collecting documents and memories of the period.

While a few books have been written on what is still a difficult topic to discuss in many circles, van Schlacht said there is much more that needs to be done to appropriately document what took place.

“There were a few articles in the [German Mennonite History Newsletter] in the last few years. Very controversial,” she said. “But that is good that it starts conversation.”

As a next step, a conference on Mennonites and National Socialism is planned this September in Münster, the beginning of what van Schlacht hopes will be more conferences to come.

“If you haven’t written down your memories on National Socialism history, please do,” she said. “There are so many getting lost that will never be remembered.”