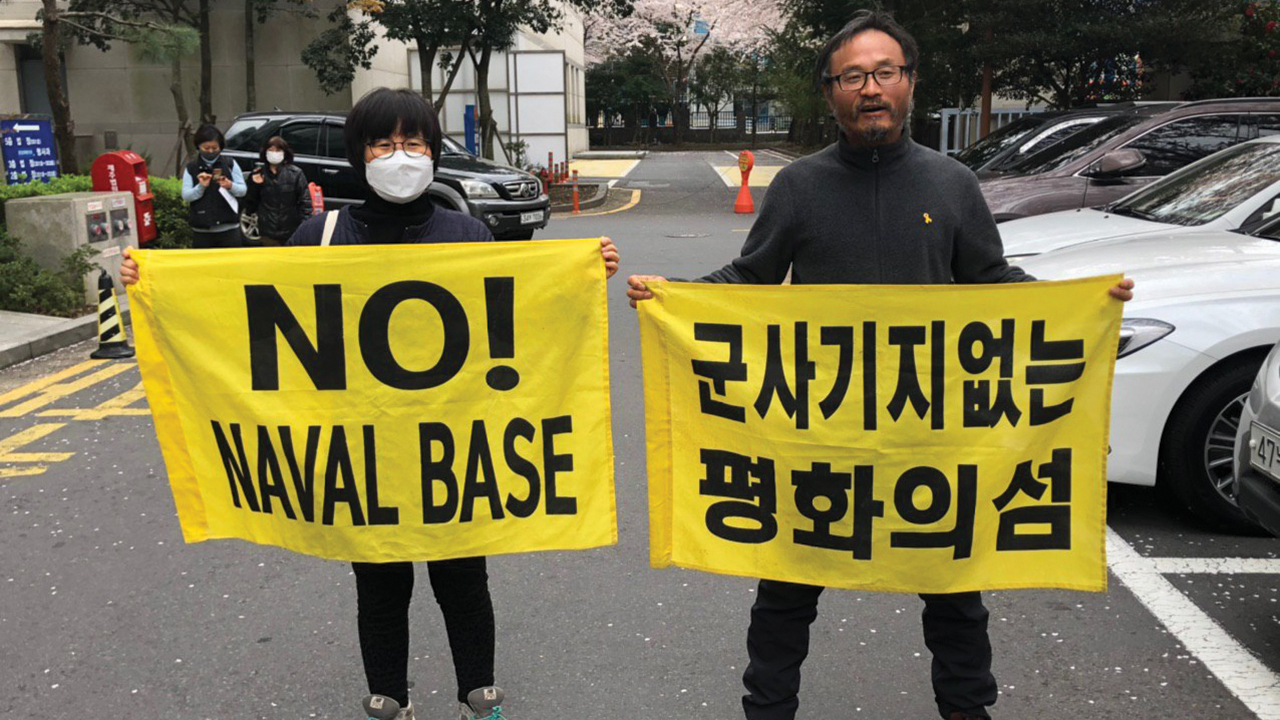 Song Kang Ho, right, protests construction of a naval base on Jeju Island in South Korea with Ryu Bok Hee in early 2020. Ryu was also arrested for entering the base, but received a lesser sentence because she did not cut the fence. — The Frontiers

A South Korean peace activist and theologian who was jailed in early 2020 for trespassing on a military base to pray for peace, disarmament and the integrity of creation was released early in October.

Wolfgang Krauss reported for Menno­news.de that Song Kang-Ho’s two-year prison sentence was supposed to last until March 29 after he was convicted for cutting a naval base barbwire fence on March 7, 2020, at Gangjeong Marine Base on Jeju Island. He attributed his five-month early release in part to a petition signed by more than 15,000 supporters around the world.

Song has been supported during his imprisonment by European Mennonites, whom he met while studying in Germany. He is founder of The Frontiers, an organization that sends peace workers to refugee camps.

Jeju Island is home to Gurumbi Rock, a symbol of peace for the island’s people. The island was declared an “Island of Peace” by former President Roh Moo-Hyun on Jan. 27, 2005, but The Frontiers says the military and construction companies bullied citizens of Gangjeong village who opposed building the deceptively named Civilian-Military Complex Tourist Port.

Krauss reported Song intends to return to the village on Jeju to train young people who work for peace, with the goal of transforming the naval base into a base camp for peace. Song sees this as an important cornerstone for the peaceful unification of the two Korean states and for peaceful coexistence in East Asia, including with China and Japan.

“Thanks to the prayers of many people, I was able to live safely during my imprisonment,” Song said. “Please keep praying that Jeju Island will become an island of unarmed peace.”

Song got to know Mennonites in the five years he worked on a doctorate in theology at Heidelberg University in Germany, spending time living with members of Bammental Mennonite Church, where he preached.

During his degree study, Song visited Rwanda and Bosnia and was shocked to see how Christians, who should teach peace, can mislead people into carrying out genocide.

The experiences pushed him to give up a life of stability as a theologian and commit to healing, working for those who are victimized by war and the military.