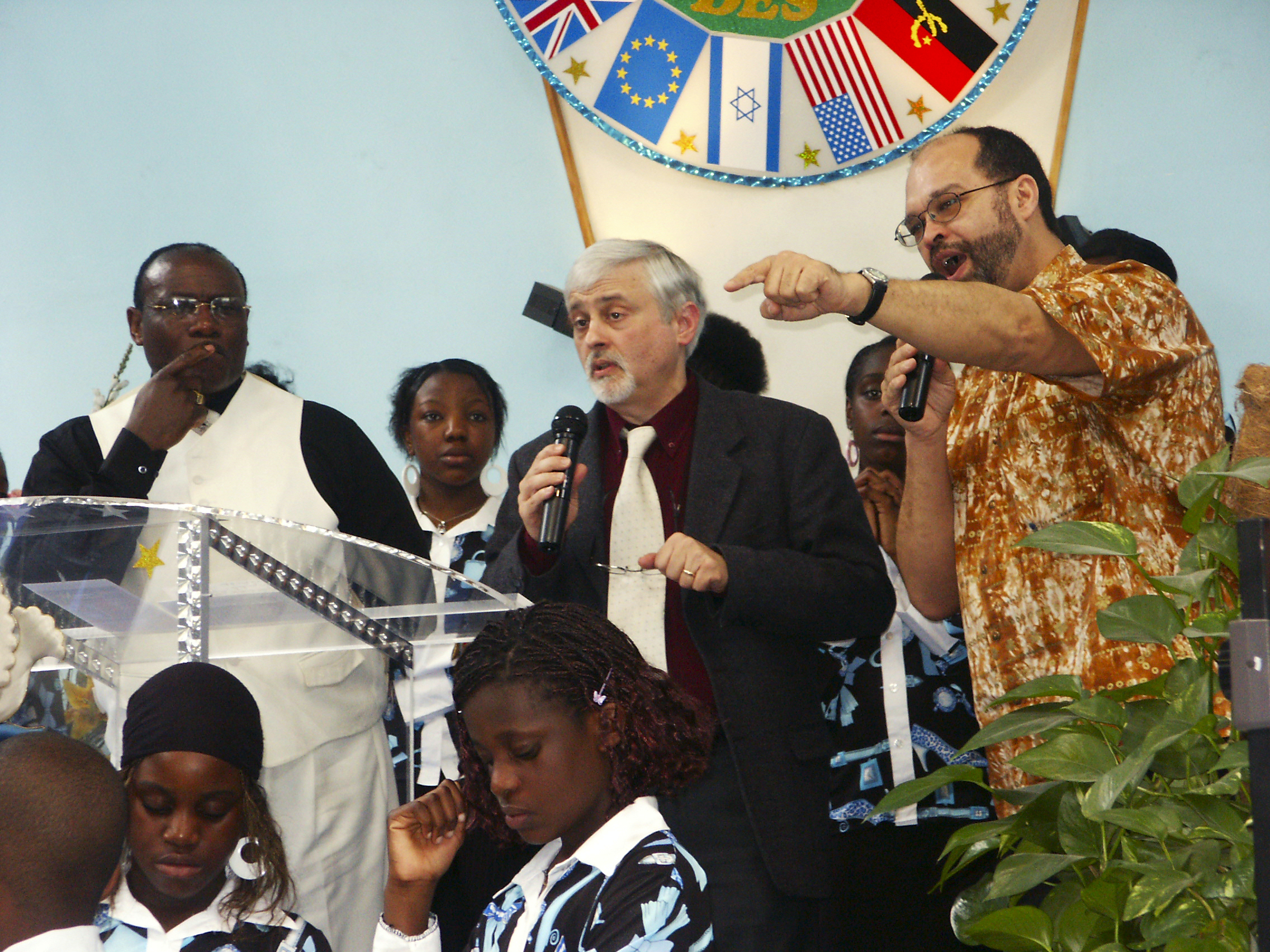 Stanley Green (right) delivered greetings and proclaimed our oneness in Christ to the Assemblée Evangélique Le Rocher (Evangelical Church of the Rock), an African immigrant church in Paris on May 23, 2004. The pastor of the church, Emmanuel Botolo, is on the left. Translating is Neal Blough of the Paris Mennonite Center.

Photo: Stanley Green, right, speaks at Assemblée Evangélique Le Rocher (Evangelical Church of the Rock), an African immigrant church on May 23, 2004, in Paris. The pastor of the church, Emmanuel Botolo, is on the left. Translating is Neal Blough of the Paris Mennonite Center. Photo provided by Mennonite Mission Network.

As he prepares for retirement in July 2020, Stanley W. Green, longtime executive director of Mennonite Mission Network, faces a transition that evokes memories of how his childhood shaped a half-century of adult ministry.

Reflecting on the evolution of his faith journey, from being born in apartheid South Africa to this current life juncture, is something Green is doing a lot as he prepares to exit leadership within the mission agency of Mennonite Church USA.

In some of his writings, Green has described how apartheid impacted his childhood, legally denying him basic human rights. He was also formed in a home in which his parents’ views of Christianity differed greatly. Though this modeling was fraught with some tension, he says, its authenticity helped lead Green to his own commitment to Jesus when he was 17.

Green’s childhood — along with his recognition of what healthy mission would look like in his post-World War II environment — helped forge his missional framework.

“The river within which my journey took its course was, however, not a single, smooth flow,” Green says. “In this river flowed the streams of social justice that were part of my paternal inheritance, along with the commitment to evangelism that were a part of my maternal heritage…. Walking with Jesus in a living relationship and following Jesus in life, both seemed indispensable to what it meant to be God’s disciple. However falteringly, I tried to do both.”

As history unfolded, this convergence of streams formed a deep channel of ministry in Green’s life. His roles have ranged from student organizer to mission worker to Mennonite pastor to missiologist to mission agency leader.

Visionary-shaping junctures along the journey

Green was raised in the Congregational Church and came to faith during evangelistic meetings at a Pentecostal church. He later worked in student movements with people like Stephen Biko (subject of the film Cry Freedom) to express faith-based social concerns. He was introduced to Mennonites in 1978 at the South African Christian Leadership Assembly, when he listened to speakers Myron Augsburger, Ron Sider and John Howard Yoder.

Green received a bachelor’s degree in theology from Federal Theological Seminary of Southern Africa, serving in pastorates at Congregational churches in Oudtshoorn and Dysselsdorp. From 1981 to 1985, Green and his wife, Ursula (Lundall), served a five-year missionary term in Jamaica.

He came to the United States in 1986 to pursue a doctorate in missiology (the study of mission) from Fuller Theological Seminary in Pasadena, California. He was a charter member of Pasadena Mennonite Church and served for five years as senior pastor of Faith Mennonite Church in Downey, California. Green also served in several part-time positions, including as conference minister for southern California with the former Southwest Mennonite Conference.

Green helped Mission Network collaborate more deeply with international churches within Mennonite World Conference and moved the agency from setting agenda to being a listening and supportive partner.

“I believe Jesus identifies with suffering and struggling and that continues to sustain my commitment to mission,” Green said in a recent telephone interview. “It helps me distinguish between the gospel message that became corrupted in association with power, greed and violence, and the message of Jesus himself.”

Green also strove for the dismantling of racism and sexism within the agency as well as the wider Anabaptist church, he said in that same interview. “Along with problems such as gender discrimination and the growing gap between rich and poor, a particular potent form of racism today is increasingly making skin color a marker for who is more valuable than others.”

The scope of Green’s leadership expanded when he became chair of the Mission Commission of Mennonite World Conference in 2015, a role he still holds.

Grieving in the leaving

Green has visited 82 countries, where he has worshiped and fellowshiped with Christians from five continents. That is a weighty experience to leave, he said. Weightier still, however, will be saying goodbye to his Mission Network colleagues.

“I will grieve a community of committed colleagues,” he said. “It will hurt not to be a part of that group I have grown to love and respect.”

As he and Ursula — who live in Goshen, Indiana, where they are members of Waterford Mennonite Church — navigate this transition, Green said he is nurturing hopes for the future. Those hopes include discovering God’s next call on his own life and supporting the call on the life of Mission Network’s next executive director.

“My biggest hope and dream for Mission Network is that it finds a leader that embodies its best hopes and aspirations of the church in North America to be a witness to the good news of Jesus,” he said.