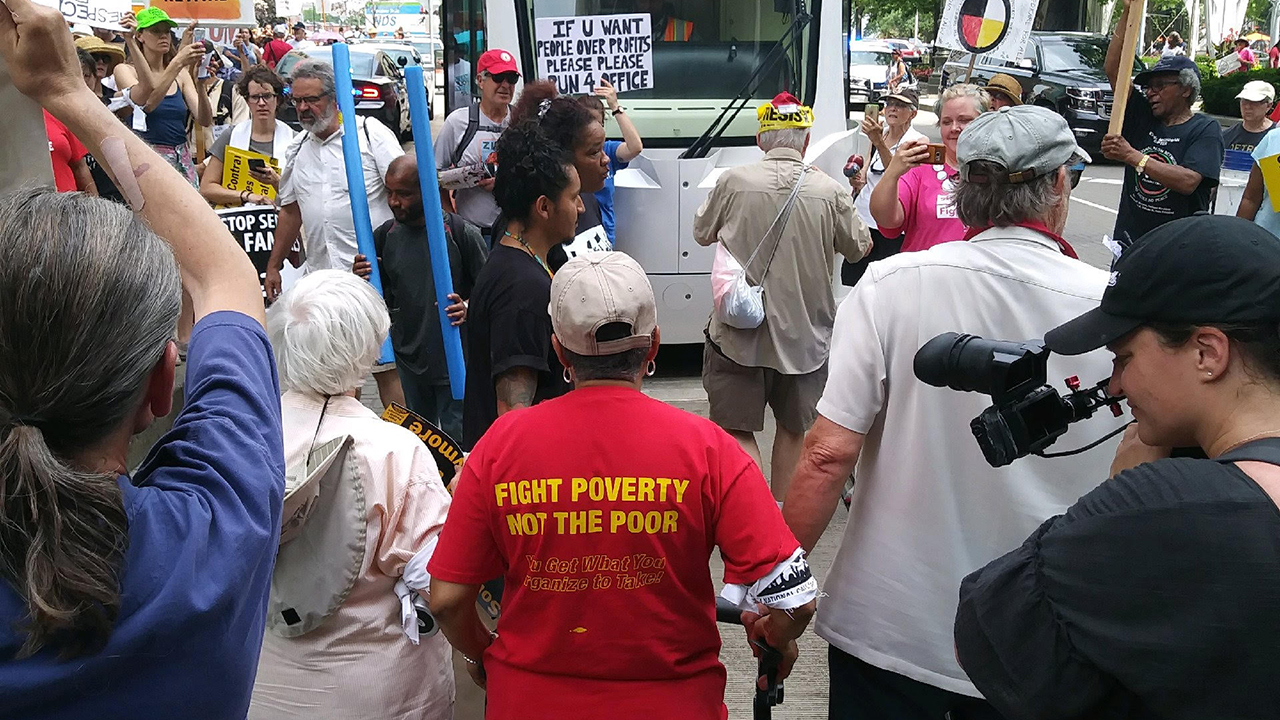 Two years before the pandemic, hundreds of us with the national Poor People’s Campaign gathered in front of the water department in downtown Detroit. We were a sea of Black, brown and white bodies with bullhorns demanding that the city stop shutting off water to low-income residents.

We weren’t begging for handouts. We were making a simple ask: clean and affordable water for all God’s children. Forty years earlier, the federal government set the standard—no household should spend more than 2.5% of its income on water. Many of our neighbors were being charged far more in a region bursting with more than 20% of the world’s fresh water.

When Lindsay and I moved to the Motor City a few years earlier, businessmen and politicians were announcing the city’s “comeback” around every corner. Restaurants. Coffee houses. Dog parks. However, we quickly learned that “redevelopment” and “urban renewal” are terms wealthy white people use to profit from others’ misery.

Detroit’s leaders were shutting off water and foreclosing on homes of poor Black residents. While the state of Michigan was doling out hundreds of millions of dollars in subsidies to white billionaires building stadiums and rehabbing skyscrapers, business leaders talked the Obama White House into transferring hundreds of millions of federal dollars from mortgage relief to “blight removal,” freeing up more land for investment by displacing residents. It only got worse during the Trump years. A basic biblical love of neighbor beckoned us to stand up and speak out against these oppressive political maneuvers.

Our public witness was more than just a march. It was a liturgical direct action. We were worshiping God by demanding justice. Just like when Jesus hit the streets riding a donkey. The crowd of campesinos followed him, waving palm branches cut from the fields they worked (Mark 11:7-11). That first Palm Sunday march was a subversive mockery of an annual Roman military parade into Jerusalem.

The donkey’s destination was the Temple, which functioned as a bank charging exorbitant taxes and interest rates on peasant farmers. Jesus and his posse took possession. When a house of prayer turns into a den of robbers, it’s time to perform a political exorcism. The text says that Jesus “cast out” those making a profit off the purity code (Luke 19:44-46).

Our procession descended upon Detroit’s most intensely gentrified downtown district, Campus Martius. We weren’t waving branches. We were carrying buckets. We filled them to the brim at the fountain in front of the headquarters of Quicken Loans, a company making a killing on jacking up interest rates on poor and working-class families, disproportionately Black and brown.

As we waded in the water, three women whispered to my soul. The first was a city councilwoman, who, while being interviewed on TV callously told victims of water-shutoff to go down to the river with their buckets. She was blaspheming sacred waters. In the 19th century, this river was the last stop on the Underground Railroad. This river was where the formerly enslaved boarded a boat to cross over to Canada to freedom. Like the Israelites parting the waters to a world without bitter service to bricks and bitumen (Exodus 1-2). Today, the city on the banks of the Detroit River is 83% Black: great-great-grandchildren of a 20th-century migration to make a living wage. Since then, every auto factory has migrated away from the promised land.

The second voice was a clarion call from Cannie, a single mother living on the city’s eastside with four children under 10 years old. She was suffering from heart issues, and her oldest daughter was diagnosed with asthma. She was renting the home from a guy who owed $4,260 to the water department and turned the water back on illegally before he conned Cannie into renting the place. A few weeks earlier, we delivered 40 gallons to her front porch. She shared with us the details of her covert hydration operation. Cannie was making a way out of no way, toting jugs and buckets down the street to a neighbor who was charging her for it.

Meanwhile, Jesus himself beckoned me through the words of someone the kids call K-Red, a high school teacher who organizes delegations of students to places of conflict like Palestine and the U.S.-Mexico border every summer. As she prayed with her feet, she recited words from the Gospel episode where Jesus told his disciples that after he was crucified he would continue to conspire with those he called the least of these (Matthew 25:36-51). Cannie and the rest of her cast-aside crew. For I was thirsty and you gave me a drink.

Jesus wasn’t starting something new. He was simply echoing the old prophetic call to bring water to the thirsty (Isaiah 21:14) and to invite everyone who thirsts, even those who do not have money, to come to the waters (Isaiah 55:1).

The throng of bucket-carriers crossed the street to join elders blocking the M-1 rail line. Dubbed the QLine by its corporate sponsor Quicken Loans, the M-1 is a $137 million streetcar that opened the year before to the delight of the city’s white comeback kids. It is a 3.3-mile route that runs south from the Cass Corridor through the stadium district to downtown, delivering patrons to restaurants, retail, breweries and ballgames. Meanwhile, public transportation for the rest of the city was stuck in the mud like Pharaoh’s chariots.

Across the street from the capital of subprime mortgages, Marian Kramer stared down the QLine to a screeching halt. Back in the 1960s, she integrated lunch counters and registered Black people to vote in her home state of Mississippi. She learned to drive when members of the Ku Klux Klan chased her and a fellow civil rights worker down a back road when she was a teenager. After she participated in a nonviolent direct action, the police threw her in a garbage truck and locked her up for eight days in solitary confinement. Marian wasn’t scared of a silly streetcar.

Posting up next to Marian was Bill Wylie-Kellermann, a native Detroiter, recently retired reverend and veteran of holy mischief who had been arrested dozens of times for sneaking on to military bases to serve communion in front of B-52 bombers, performing exorcisms at gun shows and kneeling for prayer in the middle of the street to block trucks designated for water shut-off.

For four decades, Pastor Bill only accepted part-time positions at churches in the city so that he would have the energy and time needed for community organizing and nonviolent direct action. Back in the 1980s, while serving a short stint in federal prison for a nonviolent direct action at the Pentagon, some members of his church inquired if it would be counted as vacation time. His district supervisor countered, “Oh no. Bill’s doing ministry.”

That afternoon, Marian was using a walker, and Bill had his hearing aids in. They served as our guides and voices as we hauled the sanctuary out to the street. One arrest at a time. I will forever have ingrained in my mind the image of Bill giving an interview to the local radio station while getting handcuffed by Detroit police. Like the Apostle Paul and Martin Luther King Jr., Pastor Bill gives some of his best sermons under arrest. It’s the perfect situation to preach a revolutionary politics based on biblical love of neighbor.

Tommy Airey is a post-evangelical who found Anabaptism at Fuller Theological Seminary. He is the author of Descending Like a Dove: Adventures in Decolonizing Evangelical Christianity (2018).