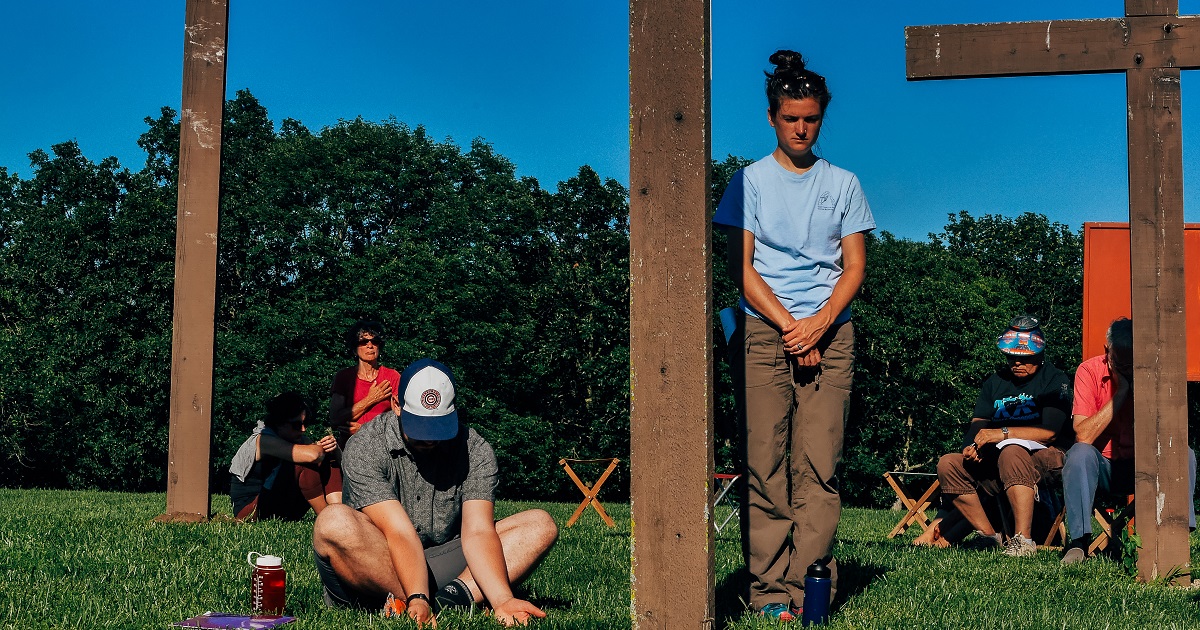 Photo: Trail of Death 2019 participants pray as they read the 600-plus names of Potawatomi people who died in the first decade following their arrival at the government-allocated land at St. Philippine Duchesne Memorial Park in Linn County, Kansas. Ben Parker Sutter is seated and Mara Weaver Boshart is standing. Photo by: Peter Anderson, fiercelyalive.com.

I’m not a Potawatomi man. I’m as White as a northern and western European guy can get. Why would I spend a week driving in a smelly van, walking in the heat and camping in summer humidity for a history that is not my own?

But it is my history — I grew up in Indiana on land taken from the Potawatomi people. And it is not only history — the Potawatomi and other Indigenous nations are still actively fighting for the national sovereignty they have been promised, and the ideology that empowered the Indian Removal Act is still influential today.

In Faith in History and Society, theologian Johann Metz describes two types of memory. One type has only a loose relationship to the past, offering an idealized history to those who have benefited, an idea of the “good old days.” Few problems are remembered and none of them pose a risk to the future we imagine we are progressing toward. The second type are “dangerous memories.” They challenge our assumptions about ourselves and our history, forcing us to be honest about the harm that has been caused. They remind us of those whose lives and dreams have been trampled underfoot for the sake of our own community’s advancement.

The former “memory” lies to us and comforts us, letting us believe that everything is essentially fine. The latter is more difficult and more painful, but invites us to learn, to grow, to acknowledge suffering and to work toward healing. One memory embraces spiritual blindness, tuning out the voices of those our nation and ancestors have harmed in the name of progress. The other memory listens and responds to the leading of the Spirit, the suffering of the incarnate Christ among those we have forgotten or ignored. It is a deeply spiritual activity to wrestle with the past and its challenge for the present.

I signed up for the Trail of Death pilgrimage because this wrestling matters to me. As a kid, “Indians” were presented as part of an idealized, harmless memory. In Indiana — which ironically means “land of the Indians” — Indigenous people were either fictional or historical. Many places were named after them, such as the Potawatomi Zoo and Miami Road. It was fun to look for arrowheads alongside freshly plowed fields. Indians were the antagonists when playing Cowboys and Indians, or mysterious figures in historical fiction. Nobody I knew complained about them being turned into sports mascots. (My favorite baseball team as a kid was the Atlanta Braves.)

But there is more to this history than the idealized past. There is a dangerous memory ready to challenge. Many of my ancestors first came to Indiana in the years after the Potawatomi and Miami people were removed — just as the land was being surveyed, parceled and sold to settlers. Many of Indiana’s residents with German heritage came in the mid-1800s because of the promise of open, unoccupied land where they could farm and thrive. While it is true that, as far as I know, none of my family directly participated in forcibly removing Indigenous people, it seems they were quite content to reap the benefits. For example, they built their lives on newly claimed land, ignoring or remaining ignorant of those who had once called it home.

They came to work hard, farm the land, raise their children and secure a future for their families — all good and noble intentions. I assume most of them were good-hearted people and kind neighbors. Nonetheless, individual morality does not negate cultural evil. My childhood home, the well-being and wealth of my family, the very existence of my hometown and my family’s roots in Indiana, did not fall from the sky; they were made possible by America’s theft of Indigenous lands. (Mennonites, which included some of my forebears, are also facing this historical complicity in colonialism, a key pilgrimage theme.)

This dangerous memory extends beyond my direct ancestors. America also has a national myth, an idealized, sanitized history that we use for our storytelling. The United States was forged out of the hard work and pioneering spirit of explorers, cowboys, settlers and patriots. God gave us, a special and privileged people, this land as our Manifest Destiny. The land was empty and uncivilized; it was our calling to tame it, from the Atlantic to the Pacific. The citizens of the United States were always the heroes of the story, and our moral and cultural superiority were our gifts to share with the world.

This mindset was not new; it was simply another expression of the Doctrine of Discovery, a legal framework born out of the Catholic Church in the 1500s. This doctrine gave European Christians a theological foundation for invading and claiming non-Christian, non-White lands. Both explicitly and implicitly, this doctrine ever since has undergirded European and U.S. colonization and the destruction of Indigenous nations. This is especially true in Africa and the Americas.

As a Christian, I must confront and repent of this oppressive, colonizing attitude of moral and cultural superiority, which is embedded within my own worldview. As a spiritual leader, I must recognize how it appears in my teaching and mentoring. As a peacemaker, I must see and resist the ways the Doctrine of Discovery continues to shape society and harm marginalized communities.

Facing our dangerous memories is not about placing blame or feeling guilty. It is a process of healing spiritually that leads to humility, repentance and learning to love the other we have harmed.

Peter Anderson was a participant in the 2019 Trail of Death. This article was previously published at MennoniteMission.net. For a longer version, click here.