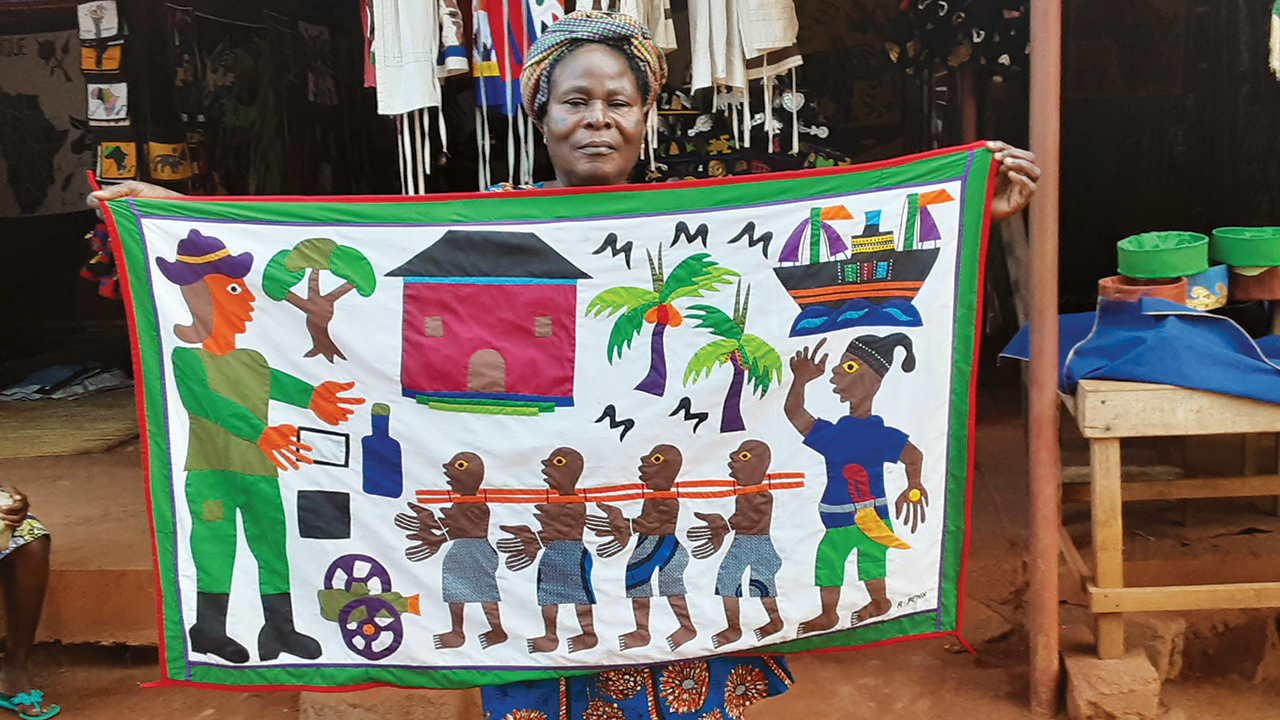 Cécile Yemadjé, an artisan in the Royal Palace of Abomey, Benin, holds her visual history of the transatlantic slave trade. — Rod Hollinger-Janzen/MMN

In the artisans’ courtyard at the Royal Palace of Abomey, Benin, where the king of Abomey still holds court, I admired the work of local artists — bronze figurines of roaring lions, appliqued maps of Africa, a weaver’s shuttle dancing back and forth.

And then, in Cécile Yemadjé’s booth, I saw a work of art that caused the breath to catch in my throat — an appliqué depicting the transatlantic slave trade, from a Beninese perspective.

Yemadjé’s visual story depicts a huge man towering over palm trees, a building and a ship. She identified the man as a Portuguese slave trader. He is surrounded by so many objects that he can’t hold them all — a bottle of alcohol, a paper, a book and a cannon.

I noticed the cannon didn’t take up much more space than the book and paper, the alcohol, or the machete tucked into the waistband of an African agent on the right. I interpreted this to mean that betrayal, through written contracts that are not honored and the destructive power of alcohol, is just as devastating as the killing that happens in warfare.

The kings of Abomey captured people to be sold — most often from rival ethnic groups. Colonial powers, unfamiliar with the geography and lacking immunity to local diseases, would not have been able to engage in human trafficking to the same degree without the cooperation of African authorities.

Yemadjé’s wall-hanging features two female prisoners and two male prisoners in bamboo neck shackles, holding out their handcuffed palms in supplication. She identified the building as the fort in Ouidah. The fort is surrounded by the Tree of Forgetting and palm trees. One of the palm trees contains coconuts. The other harbors a snake.

After a forced march of about 70 miles from Abomey to Ouidah, women were made to walk around the Tree of Forgetting seven times and men nine times. The objective was to make the captured people forget their identity, culture and history, in the hope that they would be more docile when purchased as slaves.

At the Ouidah fort, the bound men and women were branded with the symbols of the Europeans who bought them, then rowed out to a waiting ship to begin the horrific sea voyage to the Americas.

The artisan’s courtyard contained many appliqued scenes of lions, giraffes and villages. But Yemadjé’s commentary on the slave trade was one of a kind. I believe she created it to share a truth burning as a fire in her belly — a hard truth-telling that is a first step to God’s liberation for all who have ears to hear.

Lynda Hollinger-Janzen is a writer for Mennonite Mission Network. Last fall she visited churches in Benin, Burkina Faso and the Democratic Republic of Congo through a partnership with Africa Inter-Mennonite Mission, Mennonite Church Canada and MMN.