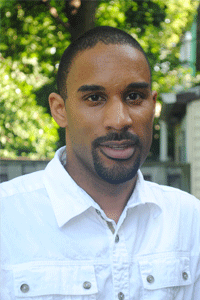 I have a brother who is one year older than me. For much of my young life we shared a bedroom. We often played and fought together. Others have frequently told me that we look alike. I don’t see it, though we certainly have similar complexions and builds. We often played basketball together and had a lot of the same interests and experiences growing up. No matter how much we got under each other’s skin, as young black men and as brothers, my life was deeply bound up and connected with his.

Late one night, my brother was hanging out with friends. They were just minding their business and having a good time. A police car drove by while my brother and his friends were outside and enjoying each other’s company.

The cop car drove by again.

Once more the car drove by, but this time the police officers stopped and got out. They immediately arrested my brother for “fitting the description” of someone who had recently committed a crime.

The only description they had of the guy they were looking for was “black male with a black T-shirt and blue jeans.” My brother and his friends were not even at the scene of the crime, and they were not doing anything suspicious at all. But that description was evidently enough for these police officers to arrest and take him to the station.

I later found out the police also initially claimed my brother had a bloodstain on his shirt. However, when the lab results came back, they learned it was just a ketchup stain.

My brother was eventually put into a lineup before the victim in the case. He was not chosen and finally was released. But not before he had spent four months locked up in the county correctional facility.

His crime? Being a young black man in a white-controlled society.

Things could have ended up much worse for my brother. I can’t exactly call him “lucky,” but when black males encounter the police and the judicial system in the United States, things often go very badly, whether or not those arrested are guilty.

I had always known that being black left one vulnerable in this country, and I had heard about many other black folks dealing with similar or worse situations. But when my brother, whom many people have said I resemble, was arrested purely based on the description “black male with a black T-shirt and blue jeans,” I realized how easily something like that could happen to me.

Though far worse things happen routinely for black people when going through the judicial process, this event awakened me to the way our nation collectively and quietly accommodates the terrorizing of black people’s everyday lives.

Blackness is a visible marker that justifies suspicion, brutality and confinement by white society. In America, being black has always been defined and understood by the majority group in negative ways: criminal, lazy, obnoxious, ugly and depraved. White society often deploys static stereotypes, then throws a single blanket over our diverse African-American community, denying the beauty and uniqueness of each of us. My brother’s experience immediately increased my awareness of my blackness in a country that continues to stigmatize it as a problem to solve.

It’s not always evident how divided our country is. We are inundated by singing and dancing celebrities, intrigued by suspenseful Thursday nights of scandals and murders, and allegiant to the multibillion-dollar corporations that feed us our sports. With these weapons of mass distraction deployed, many people ignore the ongoing suffering and the racial division that is pervasive and has never gone away. But right below the surface, for 400 years, deep disagreements about race in America have been boiling.
More recent and publicized events than my brother’s arrest continue to expose the racial divisions in our country. The United States cycles through event after racialized event, each sparking outrage over issues of racism in America.

This cycle is not new. It happens like clockwork. The responses to events like these are also predictable, as many people fall into their default defensive positions. People’s perceptions of what happened are as shaped by their socialization as by the event itself.

The majority of white people believe racism is a national problem rather than a problem in their own communities. Many deny and dismiss the experiences of black Americans, claiming that our reactions are mere emotionalism and represent an inability to deal with the facts.

Sometimes white people dismiss and label people of color as “race baiters” for daring to speak on the subject at all. Apparently, only white dominant culture is seeing things objectively and clearly. Everyone else, it is assumed, is allowing outside influences like the media to shape them.

Yet before we think that white supremacy is merely white people’s problem, we ought to interrogate how black Christians have been responding to racism in our society as well.

While many black churches want to take credit for the civil rights movement in the 1950s and ’60s, the truth is that only a small percentage of black churches actually participated in the freedom movement. Few black Christians today have acknowledged how they regularly give their full allegiance to the racialized status quo that slowly destroys us. Many black Christians have partially internalized and reproduced the same antiblack sentiments and racialized frameworks constructed to subjugate us.

Having turned a blind eye to the sufferings of others, too many black Christians, in imitation of dominant culture, have pursued the American dream in a decisively Western and selfish manner. Too many have rejected following after Jesus concretely and have missed God’s revolutionary vision for shalom. While there is certainly a rich tradition of Afro-Christian faith that has resisted the domestication of Jesus for generations, we cannot assume that every black Christian is necessarily joining God in divine transformation and resisting white supremacy through active justice and peacemaking.

Whether white, black, Native American, Hispanic or Asian, we all get caught up in the currents of our white-dominated society and internalize its messages. Each of us must turn to the good news for a more hope-filled present and future.

Given the racial history of the church in America, which has unfortunately often been at the center of the problem, few have considered the subversive life of Jesus as the way out of our racialized and hierarchical society. Churches have often been the least helpful place to discuss racism and our white-dominated society. If racism is talked about at all, it is often addressed on isolated Sundays set apart for grieving some national event or engaging in sparse and limited pulpit swaps.

None of those efforts are necessarily problematic. But when our actions are limited to such strategies, they reveal that we don’t really understand the full scope or nature of race and racism in our society.

And therein lies the problem. Churches operating out of dominant cultural intuitions, perceptions, assumptions and experiences define the problem one way, while most black people and other oppressed groups bear witness to an alternative and diverging reality.