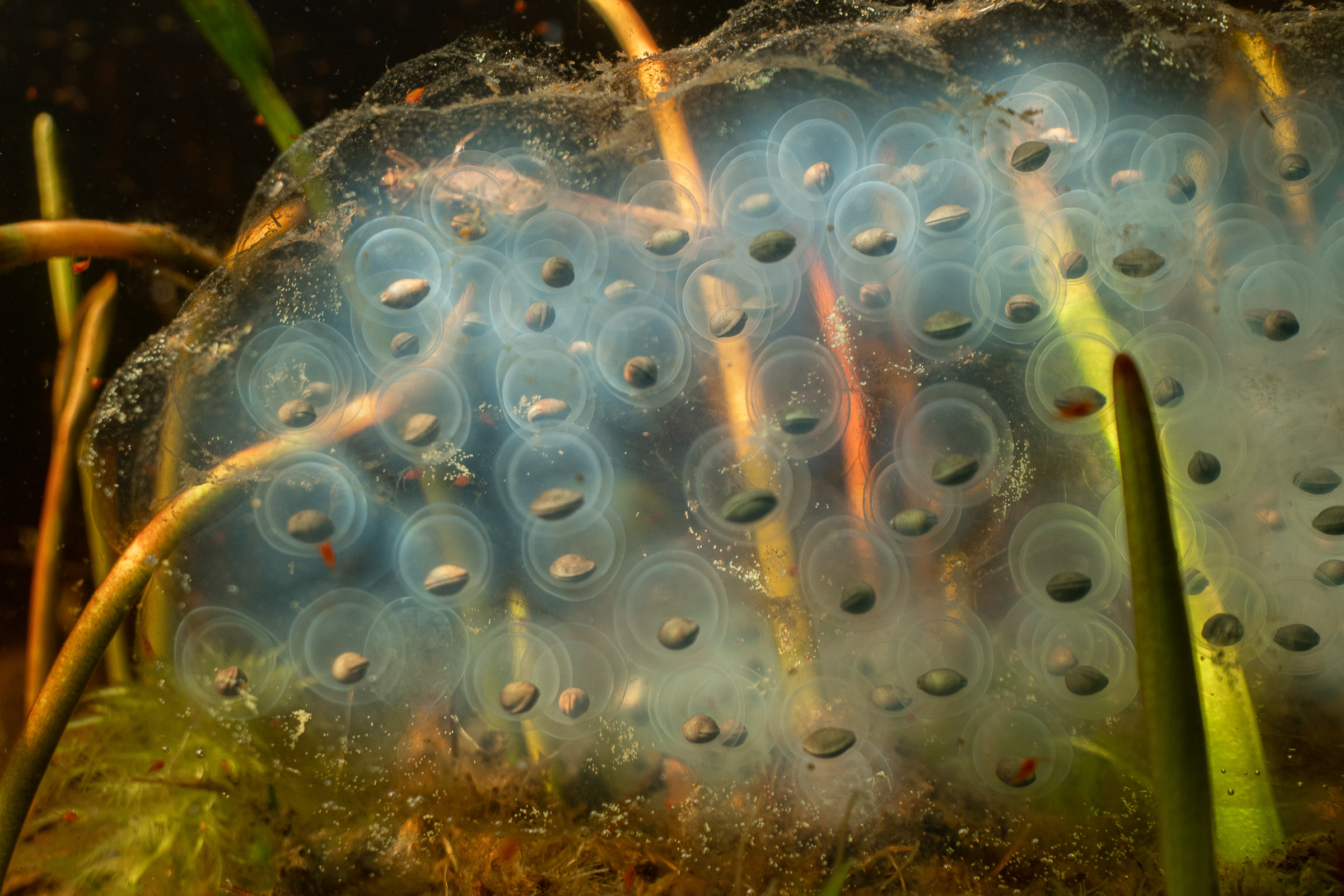 This article comes from the May issue of The Mennonite, which focuses on “The presence of beauty.” Read more reflections here or subscribe here to receive more original features in your inbox each month.

When considering aesthetics, amphibians may not be the first thing that comes to mind. But as a conservation photographer, I’m drawn to the intricate dance of underwater life in Virginia forests. From the abstract patterns of salamander egg masses to the golden filigree of a wood frog tadpole, this tiny world of beauty and complexity often goes unnoticed.

After moving to Cootes Store, Virginia, in 2005, I began exploring the natural history of my new home through photography. My interest in conservation led to affiliations with the Virginia Herpetological Society and such nonprofit groups as Wild Virginia and Virginia Wilderness Committee. Through field excursions I learned that the mountains of central Appalachia are a biodiversity hotspot for salamanders—with more than 50 species in Virginia alone. Often overlooked because of their small size and nocturnal nature, salamanders have complex lifecycles that often involve an aquatic element. After a 2012 trip that involved finding salamanders in vernal pools in the George Washington National Forest, I became fascinated by the complex worlds that exist just below the surface of these ponds.

The vernal pools of Appalachia form from seasonal rains and snow melt. These are ideal environments for egg-laying, since they are free of most predator fish. In late winter and early spring, the pools host breeding events for amphibians and macro-invertebrates.

On rainy spring nights, the central Appalachian forest wakes. Red-spotted newts waddle across the snow, and wood frogs call like quacking ducks. Spotted salamanders, having spent much of the year underground, emerge and migrate to their breeding pools.

After breeding, female spotted salamanders deposit their eggs in luminous clusters just below the surface of the water. The spotted salamander egg masses found in vernal pools are otherworldly in their abstract beauty. Like aquatic Vermeer paintings, light filters through the earth-toned water en route to the eggs. When illuminated directly, they appear as tiny worlds edged with delicate, glowing blue-green halos. Close observation becomes a combination of natural history exploration and aesthetic appreciation.

As a spotted salamander embryo develops inside an individual egg, and photosynthetic algae grow inside the egg, it gradually alters the color balance from delicate blue to a vibrant yellow-green. Researcher Ryan Kerny has discovered the algae even grow inside the living cells of the embryo, a first discovery for a vertebrate species. Understanding the science changes what one perceives. The bright green shades infusing the embryos are not only visually striking but are an indication of symbiosis.

Outside the egg masses, the vernal pools fill with other life forms. Wood frog tadpoles and caddis fly larva nibble at the edges of the eggs, looking for all the world like alien invaders. Fairy shrimp glide by upside down, undulating as they carry their own clutch of eggs in translucent bodies. Predators and prey have co-evolved to take full advantage of these ephemeral ponds. After the salamander embryos hatch, they spend the next few months as larva and will eventually metamorphosize and leave the pools, repeating the cycle as adults in future years.

Documenting vernal pool life cycles is like a spiral. The same events happen every year in roughly the same order, but every year of observation adds complexity, depth and new discoveries about behavior. One year’s work might focus on hatching eggs, while another year’s work might concentrate on metamorphosis. It’s a dramatic cycle that takes place on a minute scale. As a photographer, I spend hours crouched beside the water peering through the viewfinder of my underwater camera. In this state of flow, time dissolves and even the sense of scale is fluid. It can feel startling to stand up and once again take on the dimensions and chronological awareness of a homo sapien.

There are numerous threats to vernal pools and other forest wetland environments, including land development, roads, fossil fuel infrastructure, the global spread of amphibian diseases and climate change. As a conservation photographer, I’ve partnered with nonprofits who use my images to advocate for protection and have provided data to government agencies about endangered salamander habitats.

Simple lack of awareness is also a threat to vernal pools. Once, when out photographing egg masses, I saw a four-wheel-drive truck plow right through the pool. The driver was apologetic once a conversation alerted him to the harm his truck was creating. As a conservation photographer, one of my main goals is to promote this type of awareness and discussion. After exhibiting work in local contexts, such as Community Mennonite Church in Harrisonburg, Va., I’ve been thrilled to have long conversations about vernal pool creatures with folks who gained a new appreciation for beauty and complexity of the tiny aquatic worlds existing in their nearby forests.

Note: Vernal pools are fragile habitats. People interested in photographing them should become familiar with local natural history and regulations and should disinfect boots or waders so as to avoid the spread of disease.

Steven David Johnson is a conservation photographer and professor of visual and communication arts at Eastern Mennonite University in Harrisonburg, Virginia. A version of this story first appeared in Focal Plane Magazine. For more information, see www.stevendavidjohnson.com.