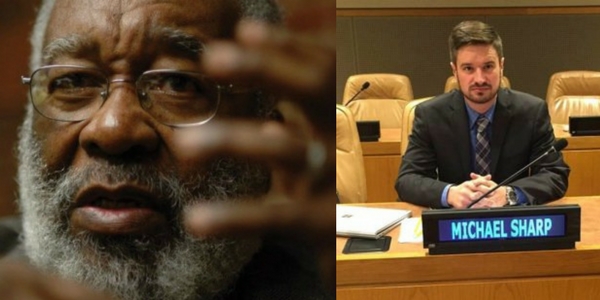 Joanna Shenk is associate pastor at First Mennonite Church of San Francisco. This article ran in the July issue of The Mennonite magazine, focused on Mennonite understandings of peacebuilding around the world in the 21st century. Read more features online.

Alongside writing Martin Luther King Jr.’s historic “Beyond Vietnam” speech, Vincent Harding also wrote and delivered a speech to Mennonites in Amsterdam that same year. He made a call to Mennonites that, unrealized in that era, was fulfilled by Michael Jesse (MJ) Sharp.

At the Mennonite World Conference in Amsterdam in 1967, Harding urged the mostly Western Mennonite audience to take seriously the concerns and anger of the poor and dispossessed across the world. He articulated why these people were angry and why they were justified in that anger due to the colonization of their land, the exploitation of their people and the theft of their natural resources.
In response to this justified anger, Harding encouraged Mennonites to spend time as scholar witnesses in places of violent revolution around the world. Furthermore, he challenged Mennonites to find out why such paths were chosen by revolutionaries. Only then, he posited, would it make sense to consider the possibilities of nonviolence.

In 1967, Harding was the chair of the history department at Spelman College in Atlanta and previously, along with his spouse, Rosemarie, had founded Mennonite House in the city.

Mennonite House was supported by the Peace Section of Mennonite Central Committee (MCC) and was an interracial, intentional community in Atlanta.

The Hardings coordinated Mennonite House as a way to support the Southern Freedom Movement and help Mennonites get involved. After serving there from 1961 to 1964, they returned to Chicago where they had met, for Vincent to complete his doctorate in history at the University of Chicago.

During that time, they lived at Reba Place Fellowship, a Mennonite and Church of the Brethren intentional community. The Reba community talked about the war in Vietnam and what that meant for people committed to peace. They learned about what was happening on the ground in Vietnam through the reports of MCC workers who were there.

When I interviewed Harding at length in 2011, I asked him if any of the Mennonite scholar-witnessing he called for had happened.

“I don’t think anything formal ever took place.…Those of us who talk about the way of nonviolence have a great responsibility to see what it’s like to be “with our back up against a wall” and to see what our response would be at that point. And how we would find and nurture and receive the grace that could make it possible for us to respond in a creative, nonviolent way.”

In the days surrounding the 50th anniversary of the “Beyond Vietnam” speech I was grieving my friend MJ Sharp’s death. As I read Harding’s Amsterdam speech on April 4, I realized that Sharp had done exactly what Harding was imploring Mennonites to pursue.

In the Democratic Republic of Congo (DRC), he was a Mennonite witness, scholar and peacemaker. Over several years, first with MCC and then with the United Nations Group of Experts, he cultivated relationships of trust and respect with people who believed they had no choice but to defend themselves with violence. They were still experiencing the oppression and exploitation of Western corporate capitalism that Harding described in 1967. In some cases, the influence of Sharp and his colleagues with the Peace and Reconciliation program of the Congolese Protestant Council of Churches led people to lay down their weapons and return home.

His first teachers in the DRC were displaced women and children living in camps in Eastern Congo. Unlike most ex-pats, who rode in cars, he loved his motorcycle. He also walked, which was unheard of for white people there. Congolese people commonly understood that white people didn’t even know how to walk. Sharp chose to be with and among the people. They were his teachers, mentors and friends. Because of this commitment, one colleague shared, “He saw things other people didn’t see.”

While working with MCC, Sharp became one of the few expats to make contact with the Forces démocratiques de libération du Rwanda (Democratic Forces for the Liberation of Rwanda, FDLR) armed group. Through building relationships over the course of several years, he contributed to the demobilization work of MCC’s local church partners to repatriate some members of the FDLR to Rwanda. He also built an in-depth understanding of the FDLR, and was courted by international figures for information on the difficult-to-access group. However, he made deliberate choices in how he shared the information that he learned through the relationships developed with combatants there. Although he provided information about the militia groups, he never shared their locations, knowing that would only lead to more bloodshed. He knew the conflict between government and rebel groups was not an easy good guys vs. bad guys situation.

Building on his work from MCC, Sharp spent two years as an armed groups expert in the Group of Experts of the United Nations Security Council, becoming coordinator of the group his second year. In the group, Sharp built understanding around how the FLDR operates. As Sharp saw it, moving beyond these clear divisions to understanding the complexities of conflict processes was a necessary step to see humanity in the other.

Upon hearing about his disappearance in the Kasai region of Western Congo in March, rebels in Eastern Congo inquired about his well-being. They were concerned for his safety and sent their condolences to his family when his death was confirmed.

In a life tragically cut short, Sharp offers us an invitation to carry on his work. As Mennonites, it’s not enough simply to make his story the newest chapter in Martyrs’ Mirror. We must seek to understand why he was so committed to the DRC and willing to risk his life for peace there. We must advocate for the continued work of the United Nations Group of Experts and for a thorough investigation of his death, the death of his colleague in the Group, Zaida Catalan, and the suspected deaths of the four Congolese men that were with them.

They were seeking to uncover the truth of the eruption of violence in the Kasai region. It began in August 2016, after government forces killed Kamwina Nsapu, a local chief and militia leader who had resisted DRC President Jospeh Kabila. Since then, 40 mass graves have been documented, with unclear accounts of potential government complicity. Following their previous mission to the area in January, Sharp and Catalan set out to investigate the dynamics of insecurity in the Kasais on March 12—the day of their disappearance and apparently of their deaths. Their killings bind us to the lives and stories of hundreds of other civilians in the Kasais who have been endangered by the violence there.
Now both Sharp and Harding are a part of our great cloud of witnesses. As boundary pushers of their respective generations, they challenge us to put our peacemaking to the test. They call us to build relationships of respect with those who have chosen violent revolution and defense. They urge us to understand the history and context of the violence and injustice that exist in our world. Their witness calls into question a Mennonite ethic that too quickly judges violence and is unwilling to risk involvement in the complexities and ambiguities of building relationships with warlords.

Who are the courageous peacemakers willing to step forward and carry on this work?

In his second speech in Amsterdam, “The Beggars are Marching….Where are the Saints?,” Harding’s words resonate across the decades:

This article ran in the July issue of The Mennonite magazine, focused on Mennonite understandings of peacebuilding around the world in the 21st century. Read more features online.