Anabaptist history is defined by migrations, typically to escape persecution or pursue opportunity. What can get overlooked, on the flip side, is the welcome that made each chapter possible.

Wanderlust continues today, as Mennonite farmers in Mexico engage with government leaders in Angola about opportunities there.

Without welcome, migration is nearly impossible. Just ask people at the U.S. border seeking asylum from Latin American violence. Or look to history, when Mennonites living in Russia struck out eastward to what is now Uzbekistan and were welcomed by the Khan of Khiva and Muslims living there.

Tales abound of Muslims extending generosity and welcome to the visitors, which is no surprise. Their faith demanded it, just as the God of the Bible carried by settlers also required, both then and now.

As politicians construct campaigns and careers upon their immigration position — either to welcome or fear the stranger — Anabaptists have an opportunity to ask themselves how they relate to today’s strangers and what kind of welcome they will extend. Columbus (Ohio) Mennonite Church has opened its doors to Edith Espinal for more than two years as she fights to avoid deportation and stay with her family.

Historically, Anabaptists have been a separatist bunch, averse to making common cause with worldly counterparts, but that hasn’t always been the case. Aspen Chapel, “a spiritual home for all” in Colorado, wouldn’t exist today if a couple of Mennonites hadn’t followed a vision to build a worship space for the world in the 1960s.

There’s no sign outside advertising “Aspen Mennonite Chapel,” but that’s because it was created by people more interested in building bridges than maintaining the fences surrounding their own sect. And, no, the steeple isn’t topped by a cross. Perched upon Aspen’s humblest peak is a dove. It’s a dove of peace and welcome. 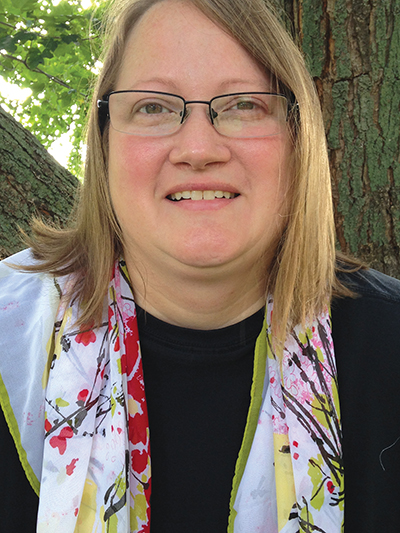 For some, these immigrants illustrate our government’s failure to implement policy and adequately militarize U.S. borders; for others, these child-refugees epitomize a humanitarian desire for immigration reform and an immediate need for aid

Since October 2013, more than 52,000 Central American children have been taken into custody as they crossed the border into the United States. So far, public outcry has been mixed. “

For me, this represents a spiritual crisis: How can Christians faithfully follow Jesus if we turn our backs on this desperate situation?

My congregation—North Goshen (Ind.) Mennonite Church—is home to many South and Central American immigrants, some of whom are documented and some of whom are not. We have wept with members of our church family who experienced midnight raids on their homes because a concerned neighbor contacted authorities with a tip.

We have stood helplessly by as families have been torn apart by deportation or the threat of detainment. With each frightening experience, the thick strata of loneliness, misunderstanding and degradation are brushed away, and we are left with human beings who want nothing more than to live and work and care for their families.

Old Testament laws did a great job of caring for the stranger (Deuteronomy 1:16-17; 27:19), and repression of the stranger was denounced by the prophets. Jesus himself began life as a refugee (Matthew 2), and while he does not address the topic of immigration directly, his life was spent reaching out to the marginalized.

So why do we Christians allow political histrionics, media rants and trivial analysis of immigration policy to guide our inaction? Why can’t the Bible’s simple words be enough for us?

Several years ago, a member of my congregation noticed a young Hispanic woman walking in the snow with a baby on one arm and holding hands with her 6-year-old daughter. He stopped and asked whether she needed a ride to the elementary school.

She accepted the ride, and he soon learned that she lived more than a mile away. He offered to make arrangements with the kindergarten teacher to drive the little girl to school each day.

After several weeks, the girl’s mother met the man at her door and asked whether it would be OK to come to his church on Sunday.

This man didn’t stop on that snowy day to invite the young mother to church. He didn’t have an agenda other than to ease the family’s burden and see the youngster safely to school. His actions were simple and thoughtful, yet we see them as heroic instead of commonplace. But isn’t this the exact behavior Jesus expects of us?

My congregation has seen a steady influx of Hispanic members and regular attenders. The Clase de los Amigos Sunday school class is flourishing. The church provides translation of the service each week, Scripture is read in both Spanish and English, and music is a mixture of songs in Spanish and English. There are Hispanic members of the church in positions of leadership, and I hope more Spanish-speakers will feel encouraged to follow their example. But none of these elements of my church would be possible without one person’s willingness to open their arms in welcome.

Jesus cared for the stranger who came to him. He didn’t question him, detain him or deport him. There are 52,000 strangers in fear of being sent back to countries where their lives are forfeit. There are more than 12 million additional strangers living in quiet fear of deportation in the United States—thousands of whom live in my community.

When at last we love and care for the very people Jesus commanded us to care for and love, maybe then we will come to see the faces impacted by our nation’s border policies and immigration reforms. Maybe then we will recognize the stranger Jesus spoke of and act as his advocate.

Becky Helmuth manages circulation and advertising for The Mennonite. This column appeared in the October print issue of The Mennonite.