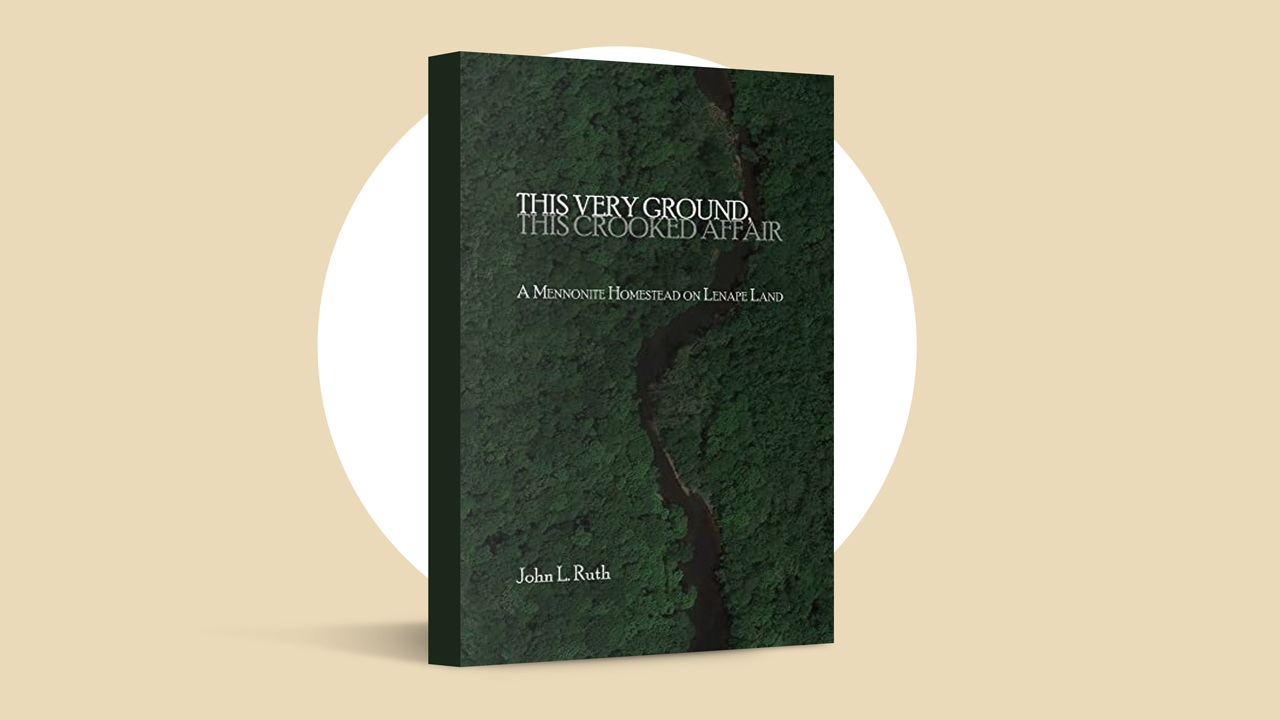 This Very Ground, This Crooked Affair: A Mennonite Homestead on Lenape Land by John L. Ruth

Historian, Pastor and Pennsylvania native John L. Ruth has long interpreted European and American Mennonite history to appreciative audiences. Like his earlier projects, this book is framed as a story. (He calls it a “musing,” to highlight imaginative dimensions of envisioning the past.) Yet it represents a departure from his previous work, with a key phrase, “Lenape Land,” embedded in the subtitle. The Lenape (Delaware) Indians thrived along rivers in the woodlands colonized by William Penn before Europeans migrated there. This Very Ground, This Crooked Affair is Ruth’s well-researched, creative effort to acknowledge the Lenape people’s perspectives on their removal from that land during the 18th century.

Generations of Lenapes, Quakers and Mennonites — as well as trappers, land-dealers and missionaries — crisscrossed not only the parcel that became Ruth’s family homestead along Perkiomen Creek, northwest of Philadelphia, but vast forests and rivers beyond. As the English Quaker William Penn journeyed first in 1682 to the new townsite of Philadelphia, dealing for land he envisioned as a haven for religious dissenters, the Lenapes’ hunting, trapping and agricultural economies were already shifting due to the arrival of Dutch and Swedish settlers. Lenape men now “needed the guns, hoes, and awls proffered by traders and wanted blankets, combs and scissors. To get them, they were willing to share their places on the ground.”

Cordial exchanges between Lenape leaders and the extraordinarily wealthy William Penn would remain steadfast in their memories. But after his return to London, Penn’s agents in America and his son Thomas Penn and cronies betrayed the Lenapes and their trust. Tragically, this story encompasses not just one “crooked affair,” but many.

In addition to William Penn, two younger men are leading characters in the story. One is Hans Stauffer, the author’s Swiss ancestor, whose children acquired and farmed eastern Pennsylvania land. The other is Sassoonan (c. 1675-1747), a Lenape -sachem (chief), who as a child observed a friendly visit between Penn and Lenape leaders near Perkiomen Creek. As more set-tlers arrived, Sassoonan migrated with his people to the Susquehanna River region. Even after this westward movement, Sassoonan met regularly with Philadelphia officials as well as other Natives regarding land, hunting, water access and other matters. Significantly, it is the voice of Sassoonan, preserved in transcriptions from a half-century of encounters and speeches with white men, that provides an opening for Ruth to tell this story of land use and conquest in a new way.

By the early 1700s, Ruth writes, “all of our story’s main characters — Lenape, English, German, Quaker or Mennonite — dreamed of passing on to their families a place to dwell in America.” In the future, these lands would be codified as Pennsylvania’s Bucks, Montgomery, Chester and Berks counties. Settlers abounded: “A decade after Mennonites had bought land for homesteads in the woods of Lenape-abandoned Perkioma, they were feeling no threat to their ownership.” They could legally and routinely transfer land to their children. Yet the Lenapes, moving still westward to the Ohio River, where further colonial encroachment would come, were “in great want.” Despite Sassoonan’s long tenure of peaceful guidance, midcentury maneuverings by the English and French would turn the story to seven years of war and incalculable loss.

Deeply rooted in geography, history and culture, this volume throws open questions about the layering of identities and conflictual relation to homelands — past, present and future. While this story is profoundly local, it sensitizes readers to specific and horrific colonial legacies of violence in other times and places, by bookending the Lenape legacies with nudges to further reflection. In the foreword, Mennonite writer Raylene Hinz–Penner alerts us to restorative justice possibilities in writing and speaking land acknowledgments as part of faith communities’ spiritual practices. In the epilogue, Ruth recounts how he gained new understandings of his Mennonite homestead. Late in life, chastened that his knowledge about Native/white relationships was slim, he spent several decades inquiring after Lenape voices — a journey that took him to Oklahoma, where more than 11,000 Lenape now reside.

This Very Ground, This Crooked Affair is confessional literature with a driven, critical aim: that those of us benefiting from colonial legacies come to understand the usurping of Indigenous lands as our story. And further, that erasures and omissions of the past do not stand.