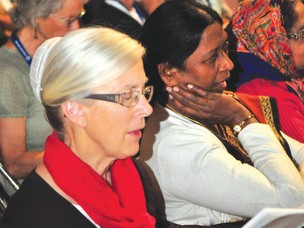 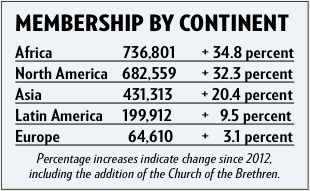 The Anabaptist family is growing, both in terms of additions by members and the new inclusion of the Church of the Brethren in Mennonite World Conference’s global directory.

The 19 percent growth is about double the previous rate from 2009 to 2012 and is due mostly to the addition of the Church of the Brethren and its significant membership in Asia, North America and Africa.

MWC general secretary César García said the Church of the Brethren asked to be included.

“In the last few years Church of the Brethren general secretary Stanley J. Noffsinger has been claiming in a very strong way that they are Anabaptists and that MWC does not have the right of using the term Anabaptist as an equivalent to MWC,” García wrote in an email. “The Church of the Brethren practices adult baptism, is one of the peace churches and identifies some influence from the theology of Anabaptists of the 16th century in their beginning.”

Noffsinger said moderator Andrew Murray attended the MWC assembly July 22-26 in Harrisburg, Pa., as an indicator of the developing friendships in the two movements.

“The listing of the Church of the Brethren [in the directory] simply was, as I understood it, acknowledgement of our places of intersection in the world and in the Anabaptist traditions,” Noffsinger said.

Not all churches in the census are MWC members. Churches are included if they are rooted in the Anabaptist-Mennonite 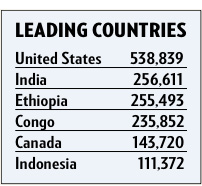 stream of church history or have direct fellowship with churches that are so rooted. Baptized members in MWC member churches increased 11.4 percent, from 1,286,426 to 1,432,644.

The inclusion of Church of the Brethren gave significant increases to North America and Asia, causing the portion of baptized believers in Africa, Asia or Latin America to drop a few percentage points to 64.7 percent. Counting only MWC members, those regions are home to 81.4 percent of MWC. 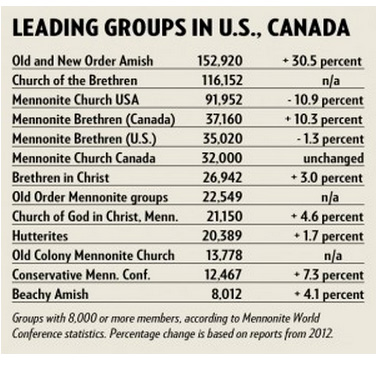 The largest national conference continues to be the Meserete Kristos Church in Ethiopia, which grew by 13.8 percent to 255,462 members. Not far behind is the Conference of the Mennonite Brethren Churches in India, which reports 212,000 members, more than double the amount three years ago. The third-largest group is Old and New Order Amish in the United States, which grew from 114,440 to 150,220 members. The Mennonite Communion of Congo and the Mennonite Brethren Churches in the Congo count 110,000 and 101,626 members, but neither have updated totals since 2012.