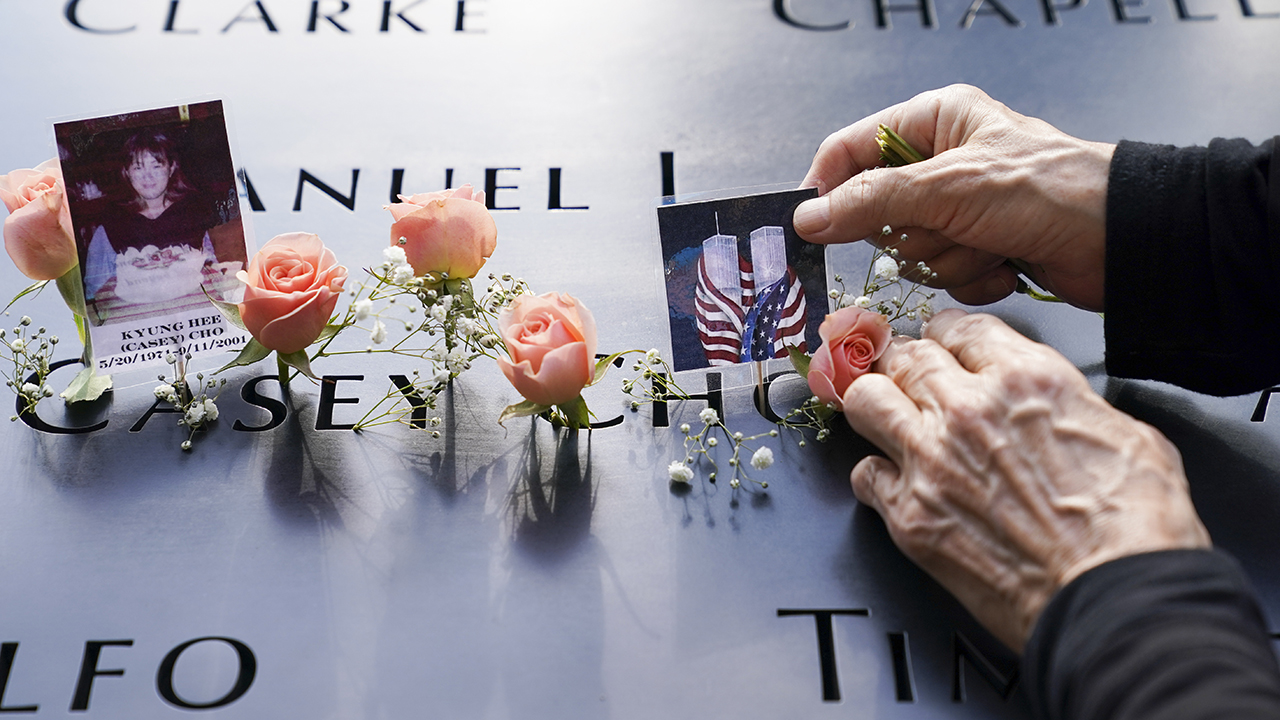 Mourners place flowers and pictures at the National September 11 Memorial and Museum on Sept. 11, 2020, in New York. — John Minchillo/AP

On Sept. 11, 2001, Imam Naeem Baig was the general secretary of the Islamic Circle of North America, having started working in its Queens, N.Y., office the year before.

“People were asking, ‘Should we close the office?’ ” he said. Ultimately, Baig chose not to despite concerns about the possible dangers of staying put in the wake of the terrorist attack. Instead, he was there to field calls from worried and nervous Muslims and kept the office’s prayer area open even as police cars parked outside to provide security.

“And then I received a call from the local Catholic archdiocese,” he said, remembering with emotion 20 years later what that call meant to him.

“He said, ‘If you need anything, we are here for you,’ ” Baig recalled of the priest on the line. “It was a great gesture.”

Though anti-Muslim sentiments grew in the wake of 9/11 — and continue — that concerned phone call from a friend across faith lines exemplifies another legacy of that historic day: the evolution and advancement of interfaith cooperation in the United States.

In the decades before, interfaith circles in the U.S. often focused on the “three faiths,” referring to Protestants, Catholics and Jews, with rare instances of partnerships beyond those religions. After 9/11, there was increased intentionality in widening interfaith relations to include a broader number of faith groups and discussions.

Consider one of the more unusual interfaith gatherings in the mid-20th century: the arrival of tens of thousands in Aaronsburg, Pa., in 1949 for the 150th anniversary of Salem Lutheran Church. A Jewish man named Aaron Levy had founded the town in the 1700s and deeded lots to German Protestants for use for houses of worship and a cemetery. Prominent Christians, Jews and at least one Muslim leader — the vice president of the U.N. General Assembly — overfilled the town for the sesquicentennial event headlined as a call for the “End of Prejudice.”

Curt Wingert, pastor of the church for the last two years, said the congregation — which also held a community prayer service on 9/11 — still has a pewter communion set given to it by Levy.

Or another interfaith first, in 1938, when a newly elected Methodist Episcopal Church bishop was blessed by a rabbi before the opened Ark, the special cabinet holding the Torah scrolls, in a St. Louis synagogue, as Religion News Service reported at the time.

“Today in the United States, you cannot have serious interreligious relations, without including Islamic communities,” said Rudin, who also has been an RNS columnist. “You cannot do that without a broad base, a whole panoply of people of all religions represented in America.”

Joan Brown Campbell engaged in interfaith relations both as general secretary of the National Council of Churches before 9/11 and as the director of the Chautauqua Institution’s religion department after the tragedy. She said fostering more inclusive religious gatherings meant pushing back against the naysayers who thought it was too much trouble and instead recognizing the value of deeper connections among people from different traditions.

“It was never easy,” she said. “You had to work it through and love it through, but it was always important.”

But Campbell said, in the end, “this is what’s going to make us, if we can come and find a way to be working together.”

Although much of U.S. interfaith relations has centered on various nonprofit groups and their leaders choosing to meet and work together, the White House has officially sought to foster partnerships with religious groups since President George W. Bush created the White House Office of Faith-based and Community Initiatives in January 2001. He included Muslims among the faiths represented at its public announcement.

Six days after 9/11, he appeared at a mosque to urge respect for Muslims, a principle continued by his second faith-based office director, Jim Towey, who started in February 2002.

“The president made it very clear to me to reach out to all groups and to be very sensitive to how Muslim organizations were feeling because they were very keenly aware of American sentiment at the time,” Towey recalled of that administration’s concern about possible “nascent religious hatred” after 9/11.

“He didn’t want to see people taking out their frustrations on the Muslim community of the United States, so he made an effort early on to tamp that down, and to make clear through the faith-based office that groups of all religious traditions were welcome, including Muslims.”

Fast forward two decades, and experts see both the progress and the challenges of interfaith relations in the country.

Stephen Avino, acting executive director of the Parliament of the World’s Religions, told RNS in an email message that “because 2 of our 4 Parliaments since 9/11 have been in North America, Americans have made up a significant portion of our attendees and continue to do so for the upcoming Virtual Parliament.”

Leslie Klingensmith, who arrived as pastor of a Maryland church about six months after Sept. 11, considers herself “a tiny cog in the wheel” of cross-faith interactions. Her Presbyterian Church (USA) congregation worked with a Muslim foundation to offer free food when the church served as a site for COVID-19 testing. Teenagers in the church’s confirmation classes visit a local mosque, and Muslims from that congregation, in turn, have joined the church in packaging meals for hungry people across the globe.

“Over the years, since 9/11, we have felt that it’s important to know our neighbors and to have names and faces when you start hearing words on TV about Muslims and Muslim bans and terrorists,” said the pastor of St. Matthew Presbyterian Church in Silver Spring, Md. “Now, I know that you’re going to have some people like that in any faith group but for the most part, they’re not like that at all. They are just trying to live their lives and be faithful.”

Towey hopes the inclusiveness voiced by some 20 years ago will continue as refugees from predominantly Muslim Afghanistan become new neighbors to Americans.

“I think there’s been a greater awareness that there’s a faith imperative to reach out to refugees regardless of whether they’re Muslim or not,” he said. “But it’s now going to be tested.”

Baig, a board member of the Parliament of the World’s Religions, has seen a maturation of work within and between faith groups. They are moving beyond just trying to understand each other and are advocating together for national issues on which they agree.

Religions for Peace USA, for which Baig recently served as a national moderator, has brought together faith leaders including Sikhs, Zoroastrians and Buddhists for webinars on topics such as reparations and “police transformation.” The Islamic Circle of North America now has a relief organization that works with the Federal Emergency Management Agency. And, like Klingensmith, he has seen how his local congregation, a mosque in Virginia, can help others in concert with nearby residents of different faiths, most recently responding to the influx of refugees from Afghanistan.

Unlike Towey, he does not see meeting the needs of the new arrivals as a challenge but rather a new opportunity for interfaith collaboration.

“We asked people to bring new bedsheets and new blankets,” he said of activities of Dar al-Hijrah Islamic Center in Falls Church on a recent Saturday.

“Our local people from local churches were bringing boxes and boxes. It was so much that we had to tell people, ‘Sorry we cannot take stuff anymore.’”

Twenty years ago, Tony Kireopoulos, associate general secretary of the National Council of Churches, invited Baig to attend and speak at a 9/11 memorial ceremony that the Greek Orthodox leader organized as then-executive director of Religions for Peace USA. Representatives of Jewish, Sikh, Buddhist and Hindu faiths were also in attendance at St. Peter’s Roman Catholic Church, one of the closest available religious spaces to ground zero.

Even as interfaith relations have become more intentional, Kireopoulos acknowledged there is a poignant side to these enduring friendships. They often are available for each other at the toughest times, such as shootings at a FedEx facility in Indiana or a temple near Lake Michigan, both of which ended with Sikh people being fatally injured.

“The big success, I think, is the fact that we do have close relationships, that we can call up one another, and say, ‘Hey how are you doing with that attack in Wisconsin?’ ‘How are you guys handling that shooting in Indianapolis?’” he said.

“None of us wants this kind of violence, but it happens, and how can we help one another?”