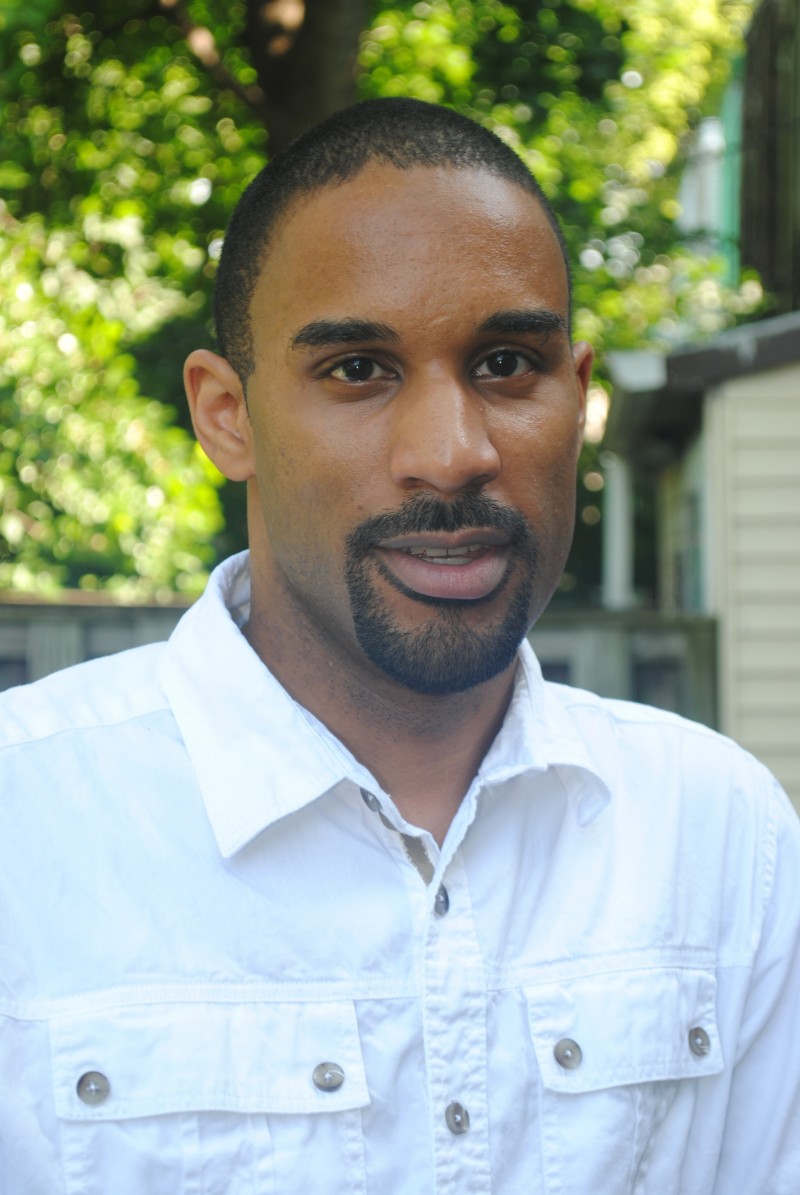 This Thursday’s Anabaptist interview is an excerpt from a conversation with Drew Hart that will appear in the February issue of The Mennonite magazine. Drew G.I. Hart blogs for The Mennonite and Christian Century, and is the author of a new book, Trouble I’ve Seen: Changing the Way the Church Views Racism, published by Herald Press.

Hannah Heinzekehr: What drew you into Anabaptism and into relationship with Mennonites?

Then I was invited to be on the pastoral team of the Harrisburg (Pa.) Brethren in Christ Church. This was an inner city, multiracial church. And I mostly went there because it was an intentionally multiracial church and I was very intrigued with that. We barely talked about Anabaptism in my interview. I think at the end they asked me, so what’s your perspective on peace?

This particular church was Anabaptist but wouldn’t allow that to be a stumbling block to bringing people of color into leadership. They were committed to recognizing black leaders from different black church traditions. But I still never called myself an Anabaptist while I was there either.

I was there for 4 years, and then I left and went back home. I had started seminary and was back in some old networks among friends in Philly. It was there, when I was no longer connected to any Anabaptists, that I realized, Ah, these Anabaptists got me. I started calling myself an Anabaptist just to be honest about some of the faith formation that had quietly and slowly shaped me. And since then I’ve been connecting with Anabaptist communities and Mennonites in Philadelphia.

Drew: I usually define AnaBlacktivists as folks that are engaging black theology and Anabaptism while also engaged in some form of activism. It’s the type of Christian formation and Christian discipleship that allows these different streams to all shape their attempt at following Jesus.

Hannah: Tell me about the Kingdom Builders group that you connect with in Philadelphia.

Drew: Kingdom Builders is an urban Anabaptist network in Philly. It’s an interdenominational network. What is cool about it is that’s one of the places where I feel most at home with Anabaptists.

It’s extremely multiracial. It’s a place where you see a merging of black and brown communities authentically. And there are different Anabaptist expressions in each church. My friend Juan, his church is comprised mostly of returning citizens out of prison and that’s their ministry focus. There are folks with more of a community development focus. There are folks doing a lot of work around immigration and the New Sanctuary movement. There are some more “ethnic Mennonites” or white Mennonites, but even still they are progressive and they engage understanding and being in relationship with people of color.

It’s a different kind of space that we have. For me, that’s where I’m home. Sometimes I go off to other Mennonites spaces and realize, Oh yeah, you guys are Anabaptist, too. But that’s not home for me in the way that a lot of these folks have really become family. I’ve preached at most of these churches and been in deep relationship.

Hannah: So what drew you to publishing this book, The Trouble I’ve Seen, with a Mennonite/Anabaptist press?

Drew: I honestly had no plans of even writing this book. I was focused on getting ready to do my comprehensive exams and I was speaking at a Missio Alliance event. Amy Gingerich [of MennoMedia] came up to me and asked me if I would like to write a book for Herald Press on race.

Of course this was right after Michael Brown was executed on the streets and there was a lot of anger. Even though it went against common sense with everything else I had going on, it just seemed like the right time.

Hannah: How did you come up with the title for this book?

Drew: The title comes from the spiritual, “Nobody knows the trouble I’ve seen.” We were struggling to figure out a good title, and I realized that the book tries to ask epistemological questions around our ways of knowing. How does race shape our knowing? And it even gets down to the level of intuition: how does race shape our intuitions? How do we think about intuitions and ways of knowing and recognize that sometimes the most common ways of knowing that we take for granted are not the best ways of being?

Those are some of the issues I try to get at in the book. The title gets down to what I as a person of color have experienced that isn’t really known and understood in broader society.

The subtitle is, “Changing the ways the church views racism.” So before we worry about what we do, first we need to change our very minds and mindsets for seeing the problems themselves. Then maybe we can consider faithful ways to respond to them.

To read the full interview with Drew Hart, check out the February edition of  The Mennonite magazine, coming soon.