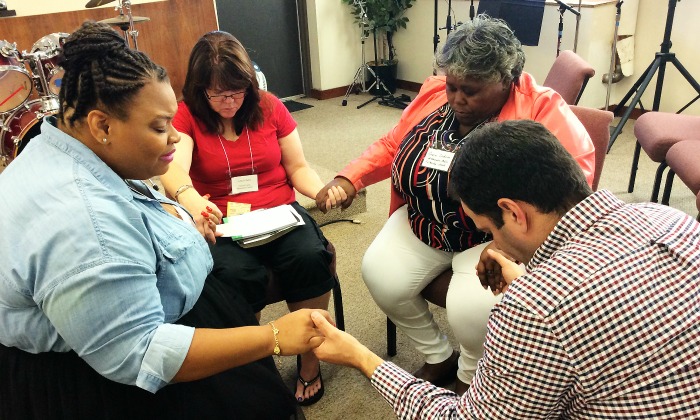 Hosted by Oxford Circle Mennonite Church, Philadelphia, the two-day event organized by Mennonite Mission Network in partnership with the African-American Mennonite Association (AAMA), encouraged participants to be “transformed by the renewing of their mind,” according to Romans 12:2, in order to prioritize mission work. Participants learned of the resources available through Mennonite Church USA agencies to empower them in their ministries. In addition, Everence was also represented.

“We’re inviting and encouraging people to realize that our work as Christians is both local and abroad,” said Ann Jacobs, Mission Network Church Relations associate and associate worship minister for Work in Progress ensemble. Jacobs works to further relationships with African-American Mennonite congregations.

Most of the participating congregations were former mission church plants in the urban mid-Atlantic. Jacobs said that Mission Network recognizes that it has not always reached out to its Racial/Ethnic congregations, which has led to many feeling neglected and unwelcome. The annual gathering is part of ongoing efforts to change that.

Among the speakers was Stanley W. Green, executive director of Mennonite Mission Network, whose message of hope included an apology regarding how previous mission efforts have wounded people of color.

Green noted that early efforts initiated by predominantly White European and North American agencies were so successful that millions in Asia, Africa and South America heard and received the good news, resulting in the current spread of Christian congregations across continents. However, the missionaries also often carried with them a superiority complex of the West, which shaped their engagement with the people of color they encountered.

For example, Western names, food, and traditional clothing were considered better. An unhealthy paternalistic relationship often developed between agency and client, rather than a mutually beneficial partnership among friends in Christ. Mennonite agencies such as Mission Network eventually made the shift to respect the cultural contexts of the people they were called to serve.

In the past few decades, these Global South congregations have continued to grow, becoming more mission-minded, while Western congregations have declined and become more absorbed by local concerns. Those who were once the “objects of mission” are now the “subjects of mission work,” Green said. Congregations from Africa, Asia and South America are now sending mission workers abroad to, for example, revitalize Christianity in Europe. These congregations abroad also want visits from Christian African-Americans and other people of color from the United States, Green said. “New relationships with global partners and local congregations are required now.”

Green said that despite the distressing times faced today (police brutality cases, black homicides in urban cities domestically and ongoing wars and terrorism in international locations), “we are at the most exciting juncture in the history of the Christian movement.”

“Mission Network is here in this conference because we want to be your friends,” Green said. “Sometimes friends offend even when they don’t mean to. I confess we have not always done things right. We were created by that part of our church that was dominant and which had the power. We sometimes default to the patterns of the past and the values that saw the ‘outsiders’ (urban churches, churches of color, immigrant churches) as objects rather than as friends. We seek your grace and your help. We want to be the gospel, God’s good news, in all our connections and relationships.”

Mission Network recently announced a partnership with The Voices Project, led by Leroy and Donna Barber. The organization trains leaders of color. In addressing the participants, Barber, who is African American, explained that about 85 percent of the 1.4 million nonprofit organizations in the United States are led by Whites. Meanwhile, most of these organizations serve communities that are at least 55 percent people of color. Their key leadership positions are often held by Whites, most of whom have no personal or professional relationships with people of color. These leaders almost always rely on their personal and professional relationships when seeking people to hire, Barber said. The demographic shift in mission focus that Green outlined presents an opportunity to remove this barrier, Barber said.

“We are shaped by a relational God. The Father, Son, Holy Spirit working in one, Triune, right?” Barber said. “This is fundamental to who we are. If you’re talking about fundraising, being called to mission … all of that stuff is relational. Nobody is giving outside of relationship, mainly. That’s the good news because we don’t have to tell communities of color how to be in relationship … it is communities of color that can teach Europeans (Whites) how not to be so individualistic. That’s the story of Scripture.”

Chantelle Todman Moore, a member of Oxford Circle Mennonite Church, which hosted the gathering, said she was particularly moved by Green’s apology and “owning how, in the past, Mennonite institutions have put people of color on the margins as objects instead of subjects of God’s mission.”

“That is something that I have wrestled with my whole life wanting to be a missionary,” said Moore, adding that despite being discouraged, she has done domestic and overseas mission work in Philadelphia as well as South Africa and Guatemala. “Just hearing from someone who is the leader of an institution own that and apologize for that and talk about how we can help make that be different … this was really powerful for me.”