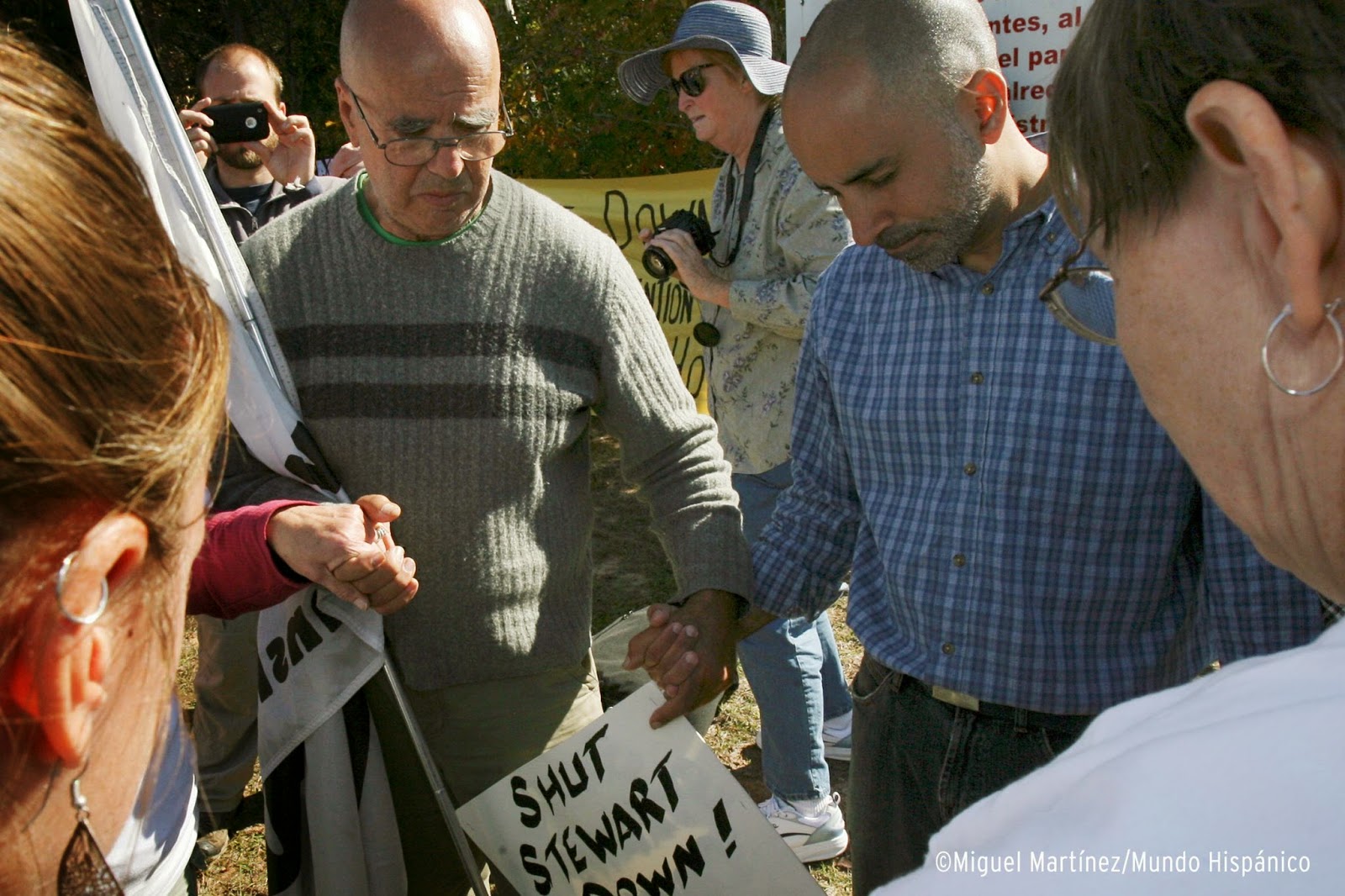 Anton Flores-Maisonet leads a prayer vigil to shut down a detention center in Lumpkin, Ga.

After nearly 30 years of teaching at Eastern Mennonite University in Harrisonburg, Va., I am seldom blown away by a chapel service. You could say I am jaded; I have seen it all. Today [Jan. 14] was an exception.

Anton Flores-Maisonet from the Alterna Community in Lumpkin, Ga., was the speaker. While explaining the ministry of their intentional community, he told stories of “Glimpses of Conversion: The Immigrants’ Rights Movement in Georgia.”

I was impressed that Flores-Maisonet lives with his family in a community, that the community owns several houses on the same street where members live. I was moved by how the community worships together and works for justice among the marginalized immigrant population. I was captivated by how the community is made up of both marginalized and mainstream people. I also couldn’t believe that he had given up a tenured professorship to work in this community without remuneration. I was convinced that this community shows how God’s kingdom can be lived on earth, and as such is a sign of what could be to the world and the powerful.

What fascinated me about the brief encounter I had with their ministry, was how closely they lined up with Ronald Rolheiser’s definition of a balanced spirituality in his book, The Holy Longing. Rolheiser’s categories were for individuals, but they could easily be applied to groups as well.

The first essential for a healthy spirituality for Rolheiser is private prayer. This prayer elicits a deeper relationship with God. It is more than a quick prayer before a meal, or a long list of demands for God’s intervention in your life. This relationship involves contemplative prayers, silence, retreats and spiritual direction. Flores-Maisonet talked about his own practices in these disciplines, and that without them he wouldn’t be able to sustain his life of activism. Most churches advocate some levels of this essential.

The second essential is social justice. Their whole raison d’etre is to work for the marginalized, particularly the undocumented immigrants in their community. Their work includes leading vigils and marches, visiting immigrants held in detention centers, legal advocacy, and visits to Central America to connect families who have been estranged for years because of their “illegal” status in the U.S. Far too few churches advocate for social justice as an essential.

Rolheiser’s final essential is mellowness of heart. Although not specifically mentioned in Anton’s chapel address, I could tell by his countenance that he didn’t take himself too seriously. When you are involved in social justice, it is far too easy to wear the burden of the injustice you see all around on your shoulders. In addition, the community lists celebration as one of their ways to balance their spirituality. Most churches add rules and regulations that mitigate against mellowness of heart.

I would add that this community not only embodies Rolheiser’s four essentials for a healthy spirituality, but also that it embodies the principles of Anabaptism. They list their values as “generous simplicity, hospitality, reconciliation, community, environmental stewardship, nonviolence and a balanced spirituality.” It can’t get any more Anabaptist than this.

God’s kingdom is breaking out in many ways and in many forms as we move from a Christendom model of religion to a post-modern multiplicity of religious expressions. The Alterna Community is a fresh Christian approach to a movement that is as old as the early church, revisited by Waldensians, Anabaptists, Quakers, Franciscans and many other groups since. They are a sign pointing to God’s kingdom on earth. They are a witness to what could be if we, the church, took Jesus’ message seriously.

Don Clymer is an assistant professor in the language and literature department at Eastern Mennonite University in Harrisonburg, Va. He is also a writer, spiritual director and leader of intercultural programs in Guatemala and Mexico. He blogs at Klymer Klatsch where this originally appeared.