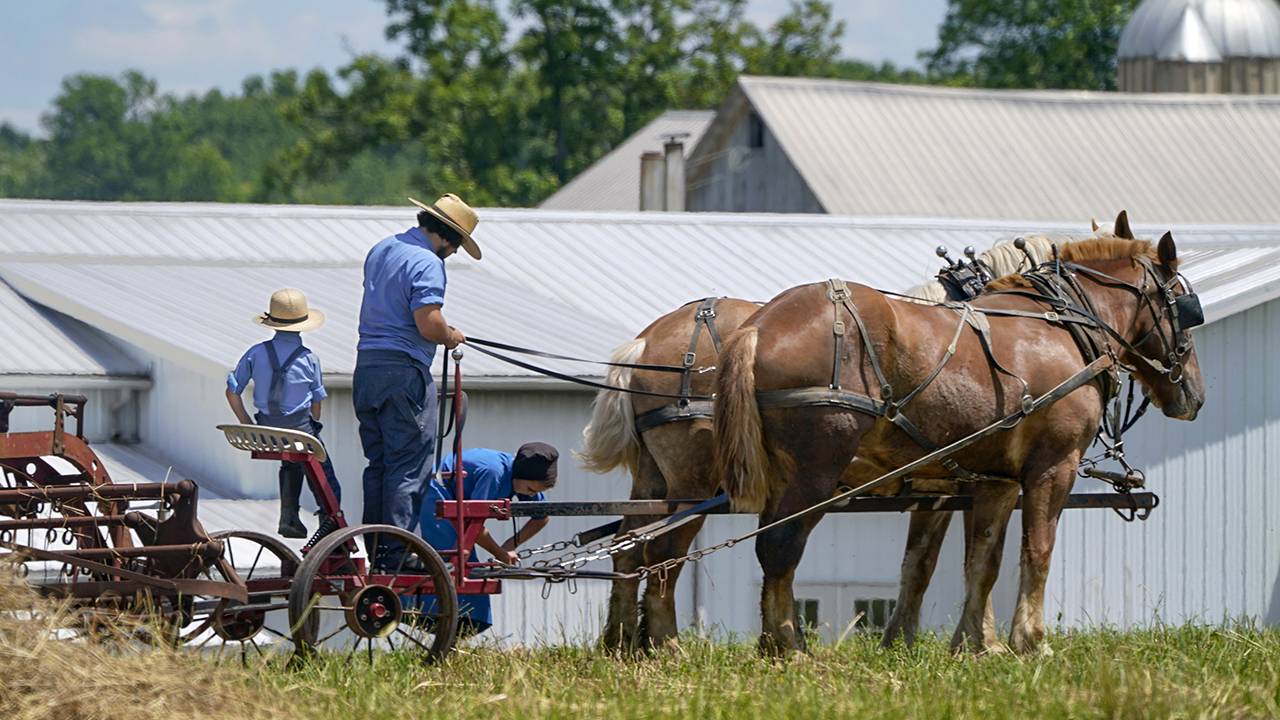 People in Amish country prepare a horse team to work on a farm in Pulaski, Pa., on June 23. The vaccination drive is lagging far behind in many Amish communities after a wave of virus outbreaks that swept through their churches and homes during the past year. ​— Keith Srakocic/AP

When health care leaders in the heart of Pennsylvania Amish country began laying out a strategy to distribute COVID-19 vaccines, they knew it would be a tough sell with the Amish, who tend to be wary of preventive shots and government intervention.

Early on, they posted flyers at farm supply stores and at auctions where the Amish sell handmade furniture and quilts. They sought advice from Amish members, who told them not to be pushy. And they asked three newspapers widely read by the Amish to publish ads promoting the vaccine. Two refused.

By May, two rural vaccination clinics had opened at a fire station and a social services center, both familiar places to the Amish in Lancaster County. During the first six weeks, 400 people showed up. Only 12 were Amish.

The vaccination drive is lagging far behind in many Amish communities across the U.S. after a wave of virus outbreaks that swept through their churches and homes during the past year. In Ohio’s Holmes County, home to the nation’s largest concentration of Amish, just 14% of the county’s overall population was fully vaccinated by the end of June.

While their religious beliefs don’t forbid them to get vaccines, the Amish are generally less likely to be vaccinated for preventable diseases such as measles and whooping cough. Though vaccine acceptance varies by church district, the Amish often rely on family tradition and advice from church leaders, and a core part of their Christian faith is accepting God’s will in times of illness or death.

Many think they don’t need the COVID-19 vaccine now because they’ve already gotten sick and believe their communities have reached herd immunity, according to health care providers in Ohio, Pennsylvania and Indiana, home to nearly two-thirds of the estimated 345,000 Amish in the U.S.

“That’s the No. 1 reason we hear,” said Alice Yoder, executive director of community health at Penn Medicine Lancaster General Health, a network of hospitals and clinics.

Experts say the low vaccination rates are a reflection of both the nature of the Amish and the general vaccine hesitancy found in many rural parts of the country.

Because many Amish work and shop alongside their neighbors and hire them as drivers, they hear the skepticism, the worries about side effects and the misinformation surrounding the vaccine from the “English,” or non-Amish, world around them, even though they shun most modern conveniences.

“They’re not getting that from the media. They’re not watching TV or reading it on the internet. They’re getting it from their English neighbors,” said Donald Kraybill, a leading expert on the Amish. “In many ways, they are simply reflecting rural America and the same attitudes.”

In one case, an anti-vaccine group took out a full-page newspaper ad showing a smashed buggy with the words “Vaccines can have unintended consequences.”

Public health officials trying to combat the confusion and hesitancy have put up billboards where the Amish travel by horse and buggy, sent letters to bishops and offered to take the vaccines into their homes and workplaces, all without much success.

“It’s not due to lack of effort,” said Michael Derr, the health commissioner in Holmes County, Ohio. “But this thing is so politically charged.”

Some health clinics that serve the Amish are hesitant to push the issue for fear of driving them away from getting blood pressure checks and routine exams.

One local business and the organizers of a community event told the health department in Holmes County that it would no longer be welcome if it brought the vaccine to them, Derr said.

Staff members at the Parochial Medical Center, which serves the Amish and Mennonites in Pennsylvania’s Lancaster County, encourage patients to get the vaccine, but many have little fear of the virus, said Allen Hoover, the clinic’s administrator.

“Most of them listen and are respectful, but you can tell before you’re finished that they’ve already made up their mind,” he said.

The clinic, he said, hardly sees any virus cases now after dealing with as many as five a day last fall.

“I would suspect we’ve gained some kind of immunity. I know that’s up for debate, but I think that’s why we’re seeing only a spattering right now,” Hoover said.

Relying on possible herd immunity when little testing has taken place among the Amish is risky, said Esther Chernak, director of the Center for Public Health Readiness and Communication at Drexel University in Philadelphia.

“It’s not a community living on an island, not interacting with other people,” she said. “They don’t have zero interaction with the outside world, so they’re still exposed.”

Also, how long someone remains immune after having COVID-19 isn’t clear, and many experts advise getting vaccinated because it brings a higher level of protection.

Close to 180 million Americans — 54% of the population — have received at least one dose of a COVID-19 vaccine. Experts say low vaccination rates could allow the virus to mutate and make a comeback.

During the first months of the pandemic, the Amish followed social distancing guidelines and stopped gathering for church and funerals, said Steven Nolt, a scholar at the Young Center for Anabaptist and Pietist Studies at Elizabethtown College in Pennsylvania.

But when non-Amish neighbors and local elected officials began pushing back against state and federal mandates, they resumed the gatherings, he said. What followed was a surge of outbreaks last summer, Nolt said.

Most now say they have already had the virus and don’t see a need to get vaccinated, said Mark Raber, who is Amish and a member of a settlement in Daviess County, Ind., which has one of the state’s lowest vaccination rates.

“As long as everything stays the same, I don’t think I’ll get it,” he said.

Changing those opinions will require building trusting relationships with the Amish, the Centers for Disease Control and Prevention said in a report looking at outbreaks in those communities last year.

What won’t work, health care providers say, is bombarding the Amish with statistics and vaccine lotteries because of their general mistrust and rejection of government help. The Amish don’t accept Social Security benefits.

Trevor Thain, who owns Topeka Pharmacy in northern Indiana, where there are 25,000 Amish, worked with the CDC on bridging communication gaps in LaGrange County, where just 18% of all residents are fully vaccinated.

Since the vaccine became available, they’ve immunized 4,200 people, perhaps only 20 of them Amish, he said.

A few weeks ago he put out flyers offering private appointments or doses dispensed inside homes. Only a few Amish people responded, Thain said, including one who came with a request: “Don’t tell my family.”