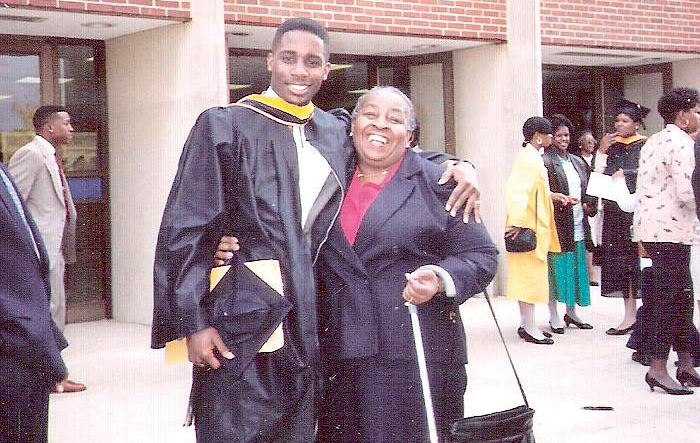 Wil LaVeist with his mother, Eudora, at his graduation from Lincoln University in 1988. — Wil LaVeist

Like many people who’ve lost parents they were close to, I think about mine daily.

Particularly during Hispanic Heritage month, I think about my Mom, Eudora Ramos, a proud Afro-Dominican who would let everyone know it.

I visualize her as I write this. Leaping to dance whenever she heard any merengue song. Didn’t matter where she was or what she was doing. She’d glide, dip and sway like a candle’s flame. Her nickname was “crazy foot.”

I hear her singing gospel songs on Sunday mornings in English and Spanish as she cooked breakfast before church. Her alto praise would blend with the aroma of johnnycake, scrambled eggs and mangu.

I miss her presence, like when I was a teen and we’d sit at the dinner table talking about current events as we watched the news on TV. I recall a moment when I flicked stations and stopped at the Spanish news channel. Mom translated what the newscaster was saying. Mom didn’t teach Spanish to my siblings and me, in part because immigrants to the United States during World War II were often disparaged as unpatriotic if they did.

I was curious about what I didn’t see in the newscast. So I asked, “Why are there hardly any Black people like us on the Spanish channels?”

She explained that Hispanics or Latinos (now Latinx) are a people group who come in all races. However, what’s often not discussed openly is that they too have a racial caste system. A socioeconomic pecking order imposed during colonial times. This racial caste system differs slightly depending on the Latin country you’re in, but basically it works this way: Whites (European descent) are privileged at the top, mestizos (or mixed-raced “browns”) are preferred in the middle, while the Indigenous people and Black people (African descent) are marginalized and oppressed to the bottom. The Christian church endorsed it, governments cemented it into laws, and the media perpetuates it in TV shows, movies and the news.

More than 11 million enslaved Africans survived the Middle Passage to North America and South America. Only 450,000 came to what is now the U.S. and Canada. Where did the others disappear to?

Some countries, like Argentina, tried to exterminate their African cultural influence. Argentina practiced “racial whitening” in the late 1800s. Brazil, second only to Nigeria as the nation with the most Africans, has marginalized 50% of its population. Others try to deny their Afro citizens exist.

“But they all embrace that African drum in the music,” Mom would say.

Refusing to be made invisible was a key reason Mom immigrated to the U.S. at age 19 — to escape the unfair, ungodly consequences of being Black.

Racism met Mom when she arrived in New York City. Her accent raised curiosity and distrust among Black Americans. A Black woman speaking fluent Spanish shocked everyone. But Mom was a Pan-Africanist. She believed in the kinship of all people of African descent. She married my Dad, William LaVeist, a dark-skinned Black American. They taught their children to be proud of who we are.

Racism against Afro-Latinos persists. I’ve had to navigate it too. New immigrants seeking opportunities in the U.S. don’t automatically drop their racial attitudes at the borders. Whites and mestizos born in the U.S. discuss race at their dinner tables too.

This past June, Hispanic activists and journalists owned up to their racism in a Miami Herald op-ed.

“We have failed to grapple with anti-blackness that exists in our own community,” they wrote. “We have been raised in families who refer to blackness in the diminutive (morenita, negrita, prietita). We have remained silent when our tías have encouraged us to partner with people who have lighter skin than we do so we can mejorar la raza” (“better the race”).

The confession comes on the heels of Ilia Calderón becoming the first Afro-Latina newscaster for Univision in 2017. “Finally” is not a reason for a fiesta, but it’s still significant. Besides, in 2018, Brazil’s beloved Black activist and only Afro leader in government, Councilwoman Marielle Franco, was assassinated.

But, in 2019, Mexico finally changed its constitution to recognize Afro-Mexicans, and this year they were counted in the census for the first time. Still, very odd, considering Mexico is the first North American nation to have a president of African descent — Vicente Ramon Guerrero in 1829.

The racial caste system is evil and must be dismantled.

Certainly, believers in Jesus Christ and equality should act.

I know Mom would agree.

Wil LaVeist is chief communications officer for Mennonite Church USA and senior executive for advancement for Mennonite Mission Network. He is a veteran journalist, author and professor of journalism at the University of Maryland Global Campus.