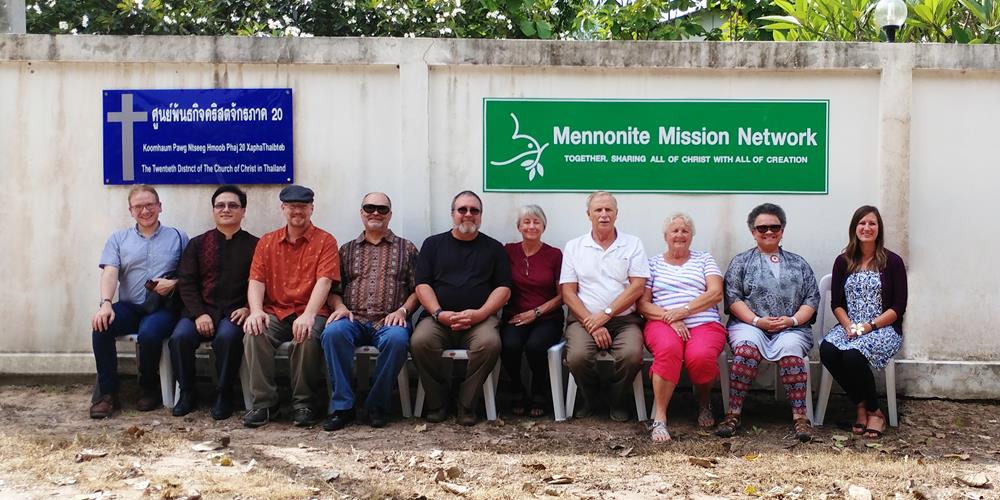 On the outskirts of Chiang Mai, Thailand, down a narrow dirt road, a plot of land sits enclosed by a weathered concrete wall. Leafy banana trees arch over the wall, framing the mountains that stretch out along Thailand’s northern region. Rev. Ponchai Banchasawan, president of a governmental religious designation called Hmong District 20, led a tour of the land last year, pointing out the buildings that serve as the district’s central offices.

However, for most of the tour, he focused on what isn’t yet visible. The back half of the land plot is empty, completely cleared of the grass and trees that grew freely when the area was purchased in May. This land, Banchasawan gestured, will be where an Anabaptist theological training center will be built. Dormitories for men and women. A guest house for teachers. Facilities to help not only local church leaders but believers across Southeast Asia.

“We have a wide vision,” he says. “We realized we have so many Hmong communities in neighboring countries, we could be the door and the place for them to receive training.” The location of the training center is crucial, as Thailand has more religious freedom than other countries in Southeast Asia, where Christians can be persecuted for their beliefs.

Persecution is something that many Hmong communities are well acquainted with. The Hmong in Thailand can trace their roots back to families who migrated from China and through Burma and Laos in efforts to avoid regional conflicts. Later, many Hmong Christians were scattered around Thailand through fighting between Communist and state forces in the 1960s and 1970s. In 1989, Hmong churches across Thailand agreed to join the seventh regional district under the Church of Christ Thailand (CCT), one of the five Christian denominations officially recognized by the country.

Hmong Christians in the northern region began forming relationships with Mennonites in the mid-1990s, working with student exchange programs, leadership training, and forging a close relationship with a Mennonite Mission Network couple*. The Hmong relate to Anabaptist values of peace and Christ-centered community as well as a shared history of persecution.

“The point of Anabaptism that drew me in was peace,” says Banchasawan. “Peace in Jesus’ way.”

He recalls using the Missio Dei booklet What Is an Anabaptist Christian? in workshops and training, emphasizing the core values of Jesus’ teachings, community and reconciliation in daily life. “We feel very close to that,” he says.

That close relationship with the values of Anabaptism drove the Hmong Christians in northern Thailand to push for their own district under CCT and be recognized as a Mennonite conference. The first dream became a reality in April 2017, when Hmong District 20 was officially recognized by Thailand’s ministry of religious affairs. One year later, the district was welcomed into Mennonite World Conference.

“The Hmong Mennonites are part and parcel of the Anabaptist story,” says Mike Sherrill, director for Asia and Middle East with Mennonite Mission Network. “As they embrace it afresh, it’s a reminder to us that the roots we share are very important.”

Back at the Hmong District 20 offices, Banchasawan concluded the tour at the front of the property, where the entrance is marked with two large signs. One, bright blue, denotes the 20th district of the Church of Christ in Thailand. The other, in luminous green, bears the dove symbol and title of Mennonite Mission Network. Banchasawan describes the creation of Hmong District 20 and the conference’s partnership with Mission Network as “wings” for the 4,000 Hmong Mennonites in 23 churches across Thailand. The next step for the fledgling conference, he believes, is educating and empowering believers across Southeast Asia through Anabaptist faith and theology.

“That’s what draws us to be partners with Mennonites as a global family,” he says. “We’ve got to walk together.”

*The couple is not named to protect those who are still persecuted.