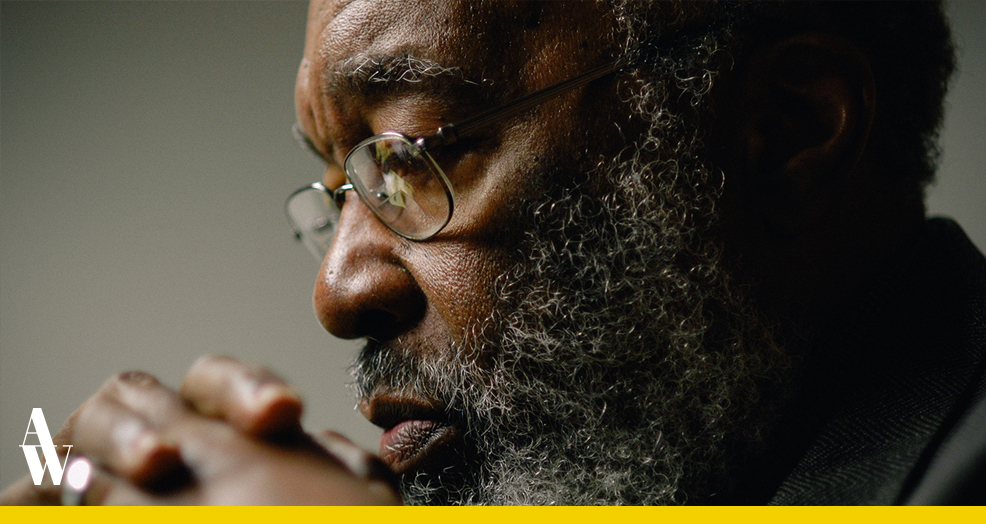 Vincent Harding: “The fear that is deeply ingrained now in white America is the fear of not being able to set the agenda anymore.” — Ryan Rodrick Beiler/Sojourners

In The Movement Makes Us Human by Joanna Lawrence Shenk, Vincent Harding talks about his friendship with Martin ­Luther King Jr.

“Sometimes,” Harding said, “we were just two short guys, at 5’8” and 5’9”, trying to play basketball at the retreats” of the Southern Christian Leadership Conference.

A few years later, in 1967, Harding would write a speech for King opposing the Vietnam War. But in those early days they were simply two guys having fun.

Being ordinary. Being human.

Harding, a Black Anabaptist scholar, shared this memory with Shenk in 2011, three years before his death. The next thing he said was, “The movement teaches us what it means to be human.”

The movement, of course, was for civil rights and racial equality. Harding rightly spoke of it in the present tense.

Today, in a time of reckoning on racism in the United States, the movement continues with renewed urgency.

Although Harding left the Mennonite church (page 10), he did not leave Anabaptism. Despite the failures of Mennonites themselves, he persistently linked the cause of racial justice with Anabaptist Christian faith.

“In some ways the movement is Anabaptism at its best — the people from below choosing to live in a different way and bringing about transformation,” he said. “The freedom movement and the Anabaptist movement can be companions.”

But have we made them companions? As Harding asked in his Mennonite World Conference speech in 1967, “If . . . Jesus is our guide to life, where are we?”

White Mennonites have not arrived where they ought to be on racial equality. Yet all of us can find hope and inspiration in the stories of those who came before us.

Looking both within our Anabaptist churches and beyond, we honor freedom-movement role models who died in recent weeks: baseball player Hank Aaron, steadfast against racial hate during a record-breaking quest; and Mennonite pastor Stan Maclin, bridge-builder across society’s divisions.

And among the living, both young and old: In this issue of AW we celebrate the life-changing impact of caring people who crossed racial barriers in the testimony of Lee Roy Berry Jr., who tells of finding a home in the Mennonite church and reflects on the unfinished complexity of Black Americans’ struggle for freedom.

On Jan. 20, Americans’ hopes rose with the words of 22-year-old Amanda Gorman, whose poem of national unity, “The Hill We Climb,” graced the presidential inauguration two weeks after white rioters stormed the U.S. Capitol.

Gorman shared a mantra she says to herself before speaking publicly: “I am the daughter of Black writers. We are descended from freedom fighters who broke their chains and changed the world.”

Who are we descended from? Whose memory spurs us on?

Harding’s story reminds us that spiritual kinship crosses barriers of race and time. Discovering Anabaptism through his study of Christian history, Harding began to see Europeans who lived four centuries ago as his spiritual forebears. White Mennonites became his church family, although it became apparent that he had chosen to “identify with those who did not always know how to identify with me.”

Taking his place among our Anabaptist ancestors, Harding is a forefather whose legacy does not rest quietly. His questions persist: How long will you hide in a cloak of whiteness? Is there still any life in the Anabaptist tradition?

Harding’s questions prompt one of our own: How is it that white Mennonites, who once had a man of such prophetic wisdom among us, have not grown further toward becoming an antiracist community?

Some of us have resolved to speak more boldly and act more directly for racial justice. In “An Open Letter to Our Lancaster Community,” hundreds of Anabaptists in Pennsylvania signed a statement last month prompted by the Jan. 6 attack on the Capitol.

Citing the mob’s “white supremacy and antisemitism,” the signers accepted a measure of responsibility for the racist element: “We want so much to say that these rioters ‘are not us.’ But we confess that we too benefit from the sin of white supremacy that was baked into the soul of our nation from the very beginning. Many of us are Christians from primarily white congregations. We repent of our complicity and silence.”

The Pennsylvanians pledged “to advocate for systemic change and support policies that protect the vulnerable and the marginalized” and “to center the voices, experiences and wisdom of our black and brown neighbors.”

May it be so for all of us.

Vincent Harding’s question from 1967 — Where are we? — remains before us. Like him and Martin Luther King Jr., sometimes where we should be is on the basketball court, or wherever it is that friendship makes us human.