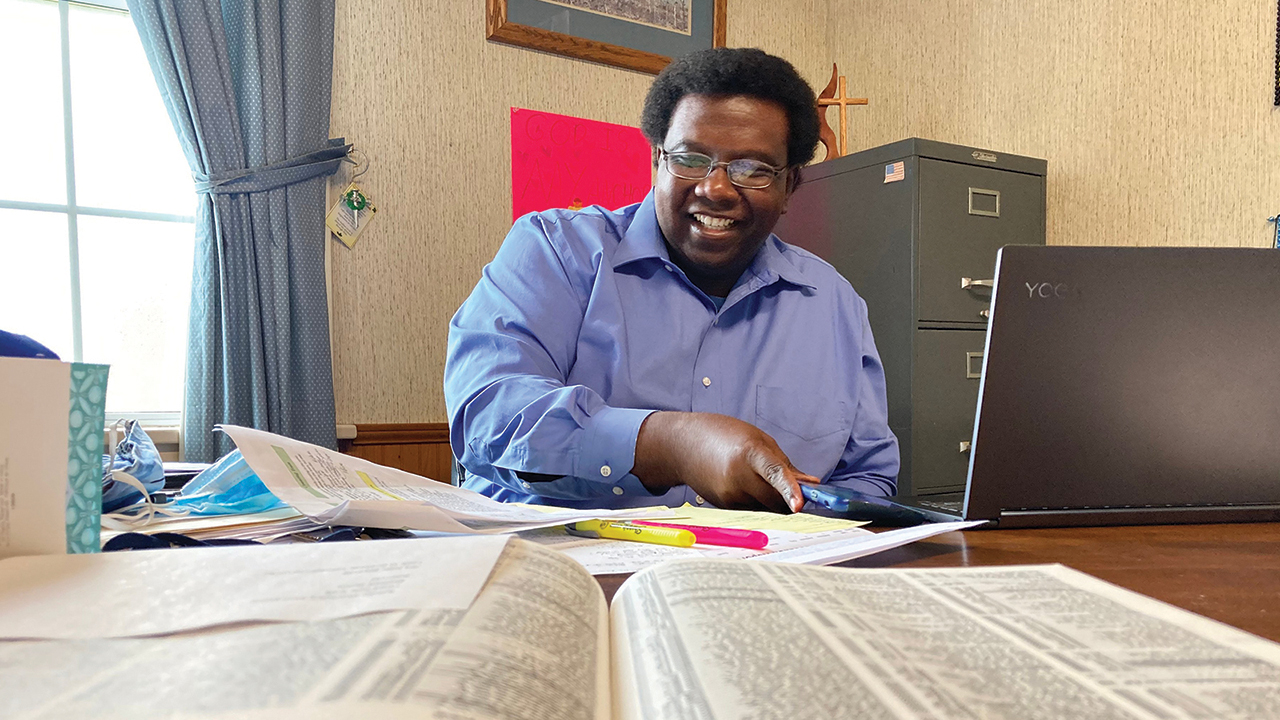 The Sunday morning service at Providence United Methodist Church in Salisbury, N.C., last month began with a few praise songs, then an opening prayer. But before launching into his sermon, Pastor Aldana Allen offered a personal testimony.

As his congregants listened to the sermon from their cars as part of the new coronavirus routine, he related a terrifying incident that happened to him the Sunday before.

On his way home from church, he stopped for gas. As he was driving away, he noticed he was being followed, Allen said. He took an alternate route just to make sure, but the person continued to follow him. As Allen finally pulled into his driveway in a suburb of Charlotte, so did his pursuer, who began revving his car, lunging forward and pulling back.

The standoff in the middle of Allen’s driveway continued for several minutes. Eventually, the pursuer drove off. It was a reminder, he said, of humankind’s fallenness. He then delivered his sermon.

Allen, who has led the small rural church for the past six years, is Black. His members are overwhelmingly white.
Providence United Methodist is a microcosm of the old rural South. The country roads leading to the 182-year-old church are dotted with “Trump 2020” signs. Some homes here still fly the Confederate flag.

Yet at Providence, race, one of the defining issues of 2020, is being negotiated in new ways. Allen, 48, doesn’t press the issue most Sundays. He walks a fine line, not wanting to alienate his congregants. He did not tell them that his pursuer that Sunday night was white (though he did tell the police who are investigating the incident). He did not point fingers. He did not issue a call to action.

But many congregants said they nonetheless understood.

“Hearing of his most recent experience tells us it’s still out there and it exists,” said the church’s youth leader, Marcie Petty, referring to racial intimidation. “It needs to stop.”

Allen is a Mississippi native who grew up in Tennessee and has spent most of his career working in white churches. He has won the support of his congregants, in part by keeping the conversation comfortable and closely relating his experience to Christian themes. Along the way he has subtly raised his flock’s awareness of how racial discrimination continues to pose problems for African Americans.

“Our belief is that when people develop relationships, biases that are part of the racial context begin to diminish,” said Paul Leeland, bishop of the Western North Carolina Conference.

The conference has recently begun a larger conversation on how to be antiracist. Most white churches are initially hesitant to accept a Black pastor, Leeland said.

Providence, where Allen was first appointed in 2014, was no exception.

“There was apprehension when he was announced,” acknowledged Neal Hall, the church’s lay leader and a lifelong member. “It’s something we’ve never experienced.”

Hall, 59, said his own apprehension faded a few months after Allen’s arrival, when his daughter, who had been in declining health, died. Hall called Allen, who rushed to the hospital where Hall’s daughter Amber was ailing, and stayed with the family, comforting them and reading Scripture passages into the early hours of the morning.

Allen, who graduated from the Interdenominational Theological Center in Atlanta, was shaped by the Black liberation theology of James Cone, who saw justice for the poor and outcast as the very heart of the gospel.

Married to a Presbyterian minister, Allen believes providing genuine care to his congregants will reduce racial prejudice and bias.

The death of George Floyd, the Black Minneapolis man killed in police custody, and the subsequent protests that broke out across the nation, moved Allen to take a direct approach.

Ten days after Floyd’s death, Allen used his Sunday sermon to expound on the story of the Good Samaritan and to recount a story from his youth. At a Fourth of July fireworks display in Oak Ridge, Tenn., a white man drove by in a truck, flicked a bottle cap against Allen’s head and spat on him.

“That is the ugliest experience of racism I have experienced, but it’s not the only one,” he told his congregants. “I share that story because of all the things that are going on in the news. I want you to know it’s real.”

He said Christians need to raise their awareness and show more empathy.

Yes, “all lives matter,” he said, but “we’re asking you to have empathy for this particular subset of all lives.”

Several members said they were moved.

“I will tell you personally I thought everything was taken care of after Obama was president,” said David Shields, a church member.

“I thought we were in a post-racial society. Aldana drove home the point that there is a lot of work to be done.”

Not all Providence members appreciated the sermon. A handful felt that church was a place of refuge and didn’t want to be thrust back into the storm.

Allen hasn’t given up. Before COVID-19, the church had sermon swaps and common meals with a predominantly Black church down the road, and he wants that relationship to continue. So far, church members say they’ve been able to see each other as people first, not Republicans and Democrats, but Allen is thinking of starting a Bible class on the nation’s political divides and how people might come together.

Church members aren’t sure they can find unity on both sides of the political divide, but on racial issues their consciences have been pricked.

“I don’t think that Pastor Allen being here is accidental,” said Hall, the church lay leader. “It’s God loosening us up. Pastor Allen was something we needed, and God delivered because he knew these times were coming. He’s showing part of what that different way looks like.”