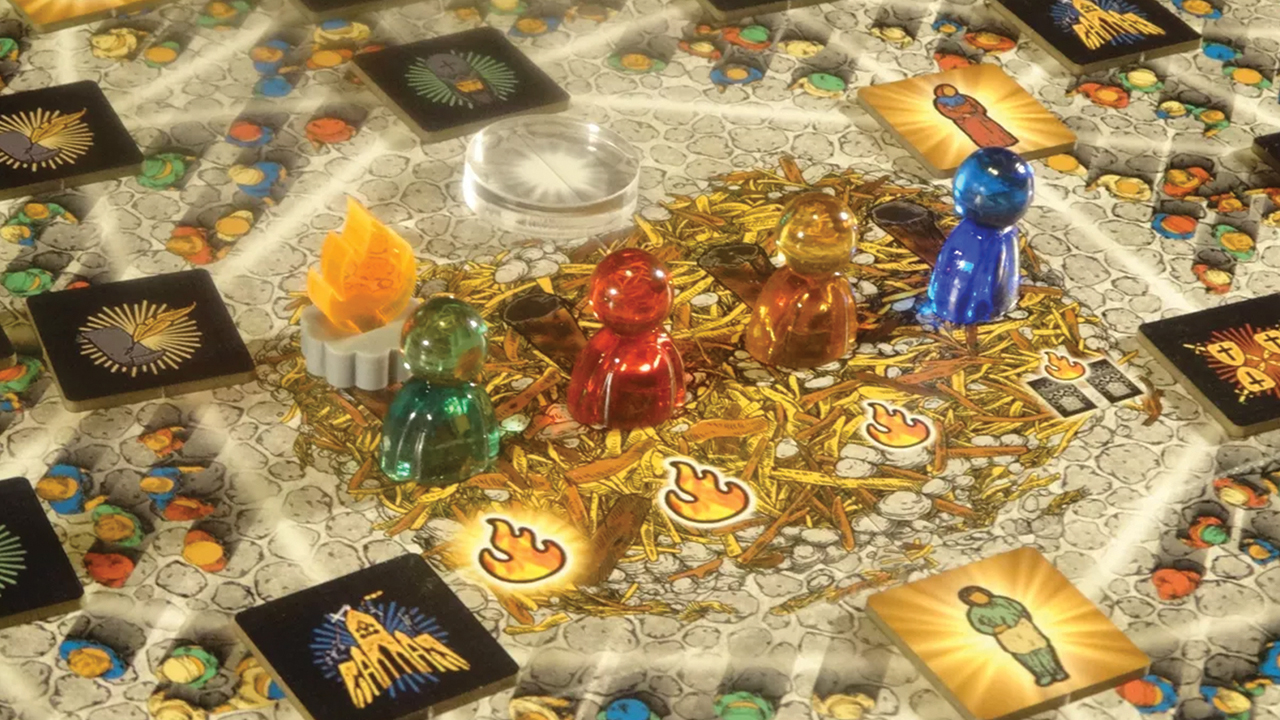 Martyr game pieces sit in the town square at the center of the game board. — John Ratigan

A new board game about Anabaptist martyr history has given designer John Ratigan a monopoly on Mennonite board games currently on the market.

Martyr: Bloody Theater 1528 is a game for two to four players who work to manage their final breaths during the Reformation to preach against the state church before execution. It was released at the beginning of August.

Ratigan, who attends Faith Mennonite Church in Minneapolis, categorizes the game as a modern strategy board game. While more basic board games leave most decisions to the roll of dice or turning over cards, modern strategy games present players with choices and dilemmas.

“You have a choice that has a consequence,” he said. “It’s about engaging that system and the people around the table. I really see these board games as an art form you can engage with on a physical level, a mental level, even an emotional level.”

A common component of modern board games is the concept of shared incentives, in which multiple players share — at least temporarily — a common goal. It’s only appropriate for an Anabaptist game to use cooperative gameplay and interpersonal fellowship.

In Martyr, interaction happens as players compete to claim doctrine and spectator tiles to aid their progress, choosing when to play breath cubes — a limited resource allowing players to perform actions and control the game’s pace. There are hymn and sermon cards and roving flames that progress along allegiance tracks.

It might appear complicated to some. To others, it’s art.

“When I see art of any kind — whether it’s visual, or music or literature, sometimes I feel a pull: I wonder if I could do that as well, perhaps from a different angle,” Ratigan said. “When I played my first modern board game with a high level of difficulty, I felt that same pull to give it a go for myself. The theme of martyrdom and Anabaptism was obvious for me because I wanted to engage that history and bring other people into that history.”

His research was no trivial pursuit. Ratigan cross-referenced names and dates from Martyrs Mirror with other sources, digging deep to ensure the concept of preaching at the stake wasn’t just a gimmick.

The game’s rule book gives a historical overview, so players new to Anabaptism can understand why they are being executed as a heretic.

“Do you have to know about Anabaptist history to play it? No. But it will give you more context to what you’re doing,” Ratigan said. “It’s about engaging with that history with people around the table with a medium that might be more palatable, while remaining true to the history.”

Early Anabaptists’ radical and costly beliefs were an entry point to Anabaptism for Ratigan. He hopes the game can be a similar avenue for others.

“I grew up in high school in the punk rock scene, and that countercultural emphasis inspired me,” he said. “When I chose to be a believer, I just kept that same template but chose Jesus for the reason. That counterculture transition was easy for me — that the Anabaptists during the Reformation could be so against the church and the state because of their convictions and what they knew was true.”

The game is being self-published through an online print-on-demand company in an approach that uses resources more wisely because no waste is created with unsold copies.

“It’s going to be a long time until I see a profit, but the goal has only been to get the game out,” said Ratigan, who is just getting started.

If everything goes as planned, he hopes to release two more games in the coming years, completing a trilogy of Anabaptist games that would be fully available by 2025, the 500th anniversary of Anabaptism.
Martyr: Bloody Theater 1528 represents the final chapter of that trilogy.

“I’m currently working on the first chapter, a two-person game on a disputation of the Swiss reformers and the radical reformers in Zurich — because nothing says fun on a Friday night like a game about arguing your baptismal beliefs,” Ratigan said. “Chapter two would be on Anabaptists baptizing adults, leading into the Martyr game.”

The game can be ordered at thegamecrafter.com/games/martyr:-bloody-theater-1528.