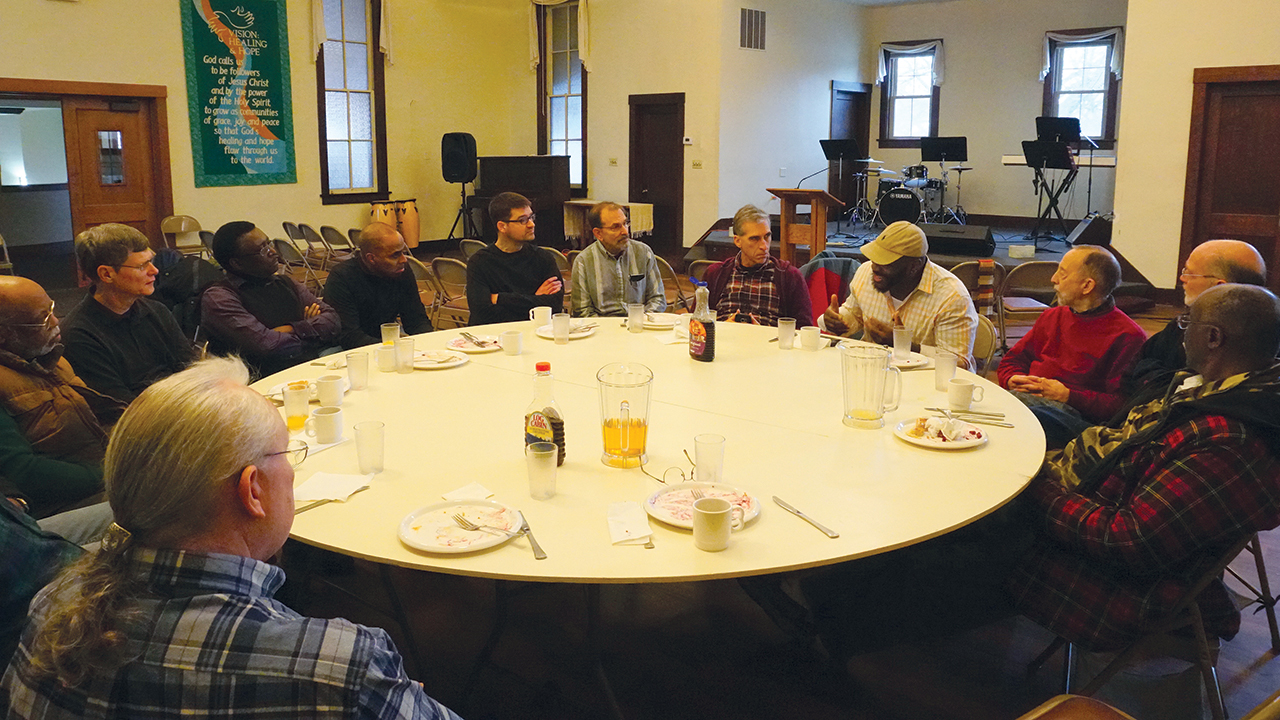 Juard Barnes, wearing a hat, shares his vision for a new ministry of reconciliation with Seeking the Beloved Community in 2018 at Fellowship of Hope. Herman Washington is at far left and Joe Sawatzky is center, in black sweater. — Keith Kingsley

One is largely Black, the other almost entirely white, and a yearslong effort to build connections and understanding is bearing fruit.

Seeking the Beloved Community — a group of men from Church Without Walls and Fellowship of Hope, along with other Elkhart-area churches — shared in a Jan. 23 webinar hosted by Mennonite Men about their work to seek antiracism vulnerability, understanding and transformation.

Both members of Mennonite Church USA’s Indiana-Michigan Mennonite Conference, the two congregations had little to do with each other until a shared concern about neighborhood violence superseded racial divisions.

“In spring of 2013 a man was murdered midafternoon right across the street from our Fellowship of Hope meetinghouse,” said Keith Kingsley, a member of the group that meets for breakfast the first Saturday of every month. “That prodded a group of men who had a regular time of meeting to have a response to increasing gun violence in our community. This was not the first homicide, nor the last, near our meetinghouse.”

Around that time, Shawn A. Lange came into leadership at New Foundation United in Christ Fellowship, also part of the conference, and wanted to be more a part of conference activities. He and other coordinators began planning Seeking the Beloved Community events, where members share about their experiences.

Attendees confront hidden truths and fears that separate the body of Christ. For Lange, this included the challenge to open his eyes wider, dropping grudges from a childhood of ostracization in a majority white neighborhood where he couldn’t go to football games, or later encounters with “white silence” that is blind or rooted in denial.

“When I started going to Fellowship of Hope for the men’s breakfast, I just knew that if God could work inside us to change us, I knew that was possible for others,” said Lange during the webinar, which was attended by more than 100 people. “With the energy gained from each gathering, all the gifts of the Spirit are always present in the room.

“There are vulnerable moments because of how we grew up with race, but I believe God is doing a mighty work.”

Kingsley recalled how times of prayer with Lange have helped him “surrender the power of my cultural norms and the assumption these are universally held values.” One day, Kingsley’s daughter was facing health concerns, and the men began praying in distinctly different ways — one quiet and restrained, the other bold and forceful.

“I was touched. This kind of prayer fills out my restrained quiet prayer,” Kingsley said. “It enriches it. It does what I can’t do. Perhaps I can learn, but for now I need my brothers to pray for me. This works toward wholeness.”

Joe Sawatzky lives in Goshen and has been part of the group since 2016. He said his participation is based on his call to be part of “one new community in Christ,” which isn’t complete unless he connects across divides with other brothers and sisters.

“In some ways as a white person when society is structured so that you’re privileged, maybe sometimes you depend on your privilege rather than depending on God,” he said.

He appreciates the testimonies of the group’s Black members, who have had “a dramatic encounter with God, or they know God brought them through many dangers, toils and snares.”

“Listening to those stories, it’s a challenge to understand and claim that God is also who brings us through the trials. It’s a challenge to claim our identities as white men. We’re called to an identity bigger than whiteness or one expression of the church, but one new humanity in Christ.”

Herman Washington is a pastor with a long history of interacting with Mennonites in Detroit, but he didn’t continue those connections in Indiana until Seeking the Beloved Community drew him back with honest and deliberate openness.

“It’s not easy to get together with people of different races and backgrounds and have strong interaction,” he said. “This group’s intended purpose of coming together draws out from each other their desire to follow Christ in some very real ways. We do that month after month, exposing ourselves to people who for the balance of the month we have no dealings with. I’ve enjoyed that.”

David Miller spoke of using role-playing exercises in nonthreatening ways to highlight how privilege manifests itself, often in ways that seem invisible to members of dominant groups. Theory turned into experience when his son-in-law, a Goshen College alumnus from Nigeria, was stopped by the police and contested a charge out of concern for his citizenship process.

“As I sat there in court, I could physically feel my blood pressure rising and my hands and arms quivering, especially when I blurted out something when the police officer lied under oath,” Miller said. “The judge threatened to throw me out.”

He asked Jonathan Brown, pastor of Church Without Walls, what he does with the rage. He just smiled and told Miller, “You’re starting to understand.”

“All of a sudden I began to understand how hypersensitive illnesses are more prevalent among African Americans, and lifespans are shorter,” Miller said. “I had known things before and thought I was one of the good guys, but now I was starting to know something viscerally and began to have a glimpse of what my Black brothers and sisters carry daily.”

As Seeking the Beloved Community looks forward to a post-pandemic shift from virtual meetings back to in-person breakfasts, Mennonite Men hopes to extend the group’s conversations more broadly. Director Steve Thomas said Mennonite Men hopes to host an event related to this topic this fall in the northern Indiana area.