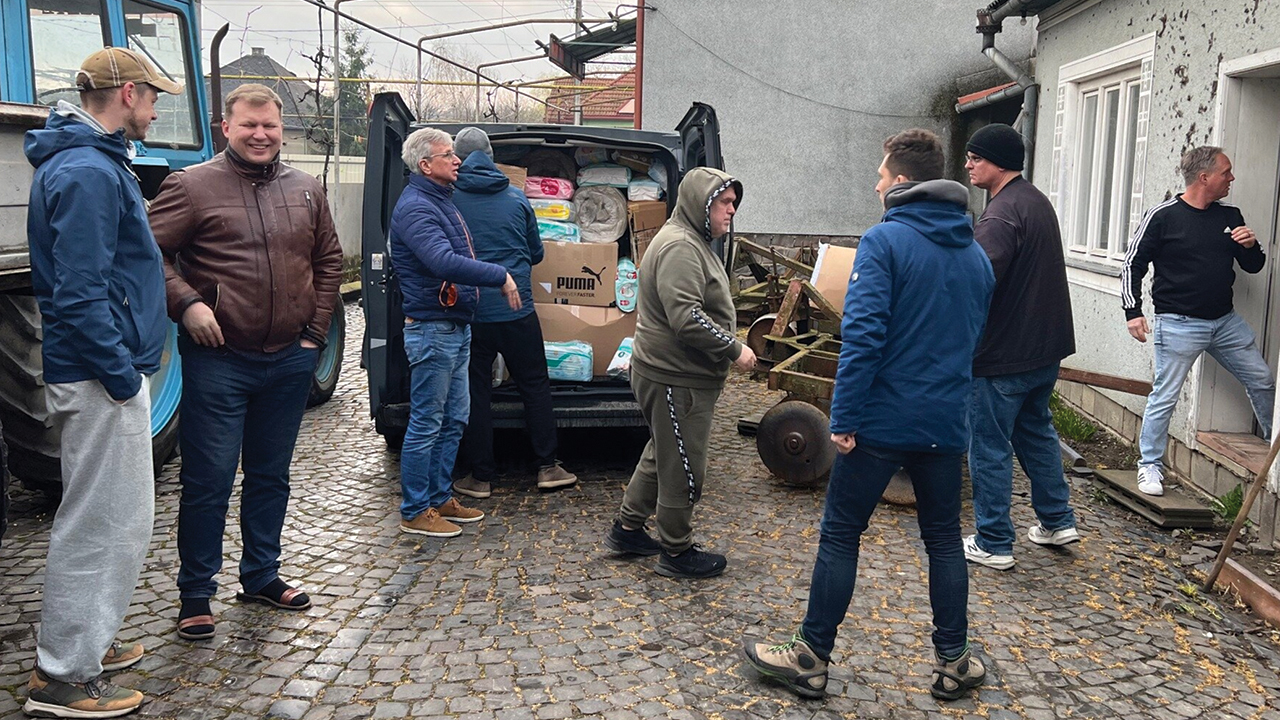 Donations from Lithuania are delivered in Ukraine. — Association of Mennonite Brethren Churches in Ukraine

A March 26 report by Andrei Kis­elyov at ambcu.com thanked churches for assistance. He described how the Association of Mennonite Brethren Churches in Ukraine formed eight ministry centers across the country, each with a team of 10-20 people.

Coordination is done in Mukachevo, a city near the western border with Slovakia and Hungary, where aid from European churches, organizations and businesses is received and distributed. Donations of furniture, appliances and other household items are being gathered there to accommodate a constant stream of refugees.

“All funds and relief go to places where they are most needed and literally save people from starvation or help take them out of the shelling zone,” Kiselyov wrote. He estimated the centers’ coverage extended to more than 17,000 people, which could be tripled with more resources.

“In total, more than 100 tons of humanitarian aid have been sent and distributed,” he said.

“Around 500 women and children were taken to Europe this month. All of our ministry centers cooperate with local governments, which often turn to the ministers for help.”

Vans full of relief goods donated by MB churches in Austria were making weekly deliveries to Ukraine in April and returning with refugees. Lithuanian MB congregations are making similar trips.

Kiselyov shared about a pastor in Kharkiv who was hosting a prayer meeting at his home when it was hit by a rocket that did not detonate.

“Miraculously, the Lord saved his life and the lives of those who were nearby,” he wrote. “The pastor helps people in the hottest districts of Kharkiv.”

Multiply, the North American Mennonite Brethren mission agency, reported April 19 that no member of an AMBCU congregation had been killed. Several congregations are in combat zones or areas under Russian occupation, including those in Avdiivka, Berdyansk, Balkove, Kutuzovka, Andriivka and Molochansk. While many people have fled these areas, some church members have stayed.

Elderly women who remained in Molochansk and Tokmak have gathered there to make verenike and pack care packages.

In Germany, congregations have welcomed refugees as households and churches navigate the tension of being in close relationships with both Russians and Ukrainians, taking care not to allow shame, fear or hatred to sow division. Some families foster children from both nations. Multiply reported one family said their Russian foster children were afraid to meet Ukrainian counterparts, saying, “They will not accept us. We are now just enemies.”

German MB leader Walter ­Jakobeit wrote by email on April 8 that he had spoken with two congregations that had each taken over 100 refugees into their homes and another church that received about 30. Congregations have helped with accommodations, child care, spiritual and humanitarian care and Russian-language worship services.

Much of the welcome has come at an individual or congregational level based on networking that was already in place with ministries in Ukraine, which makes an accounting of overall numbers difficult to quantify.

“Many Ukrainian refugees were already helped by churches before the general public became active,” Jakobeit wrote. “For example, one day after the beginning of the war, private individuals from the churches jumped in their cars to pick up refugees from the Ukrainian border and brought them to Germany.