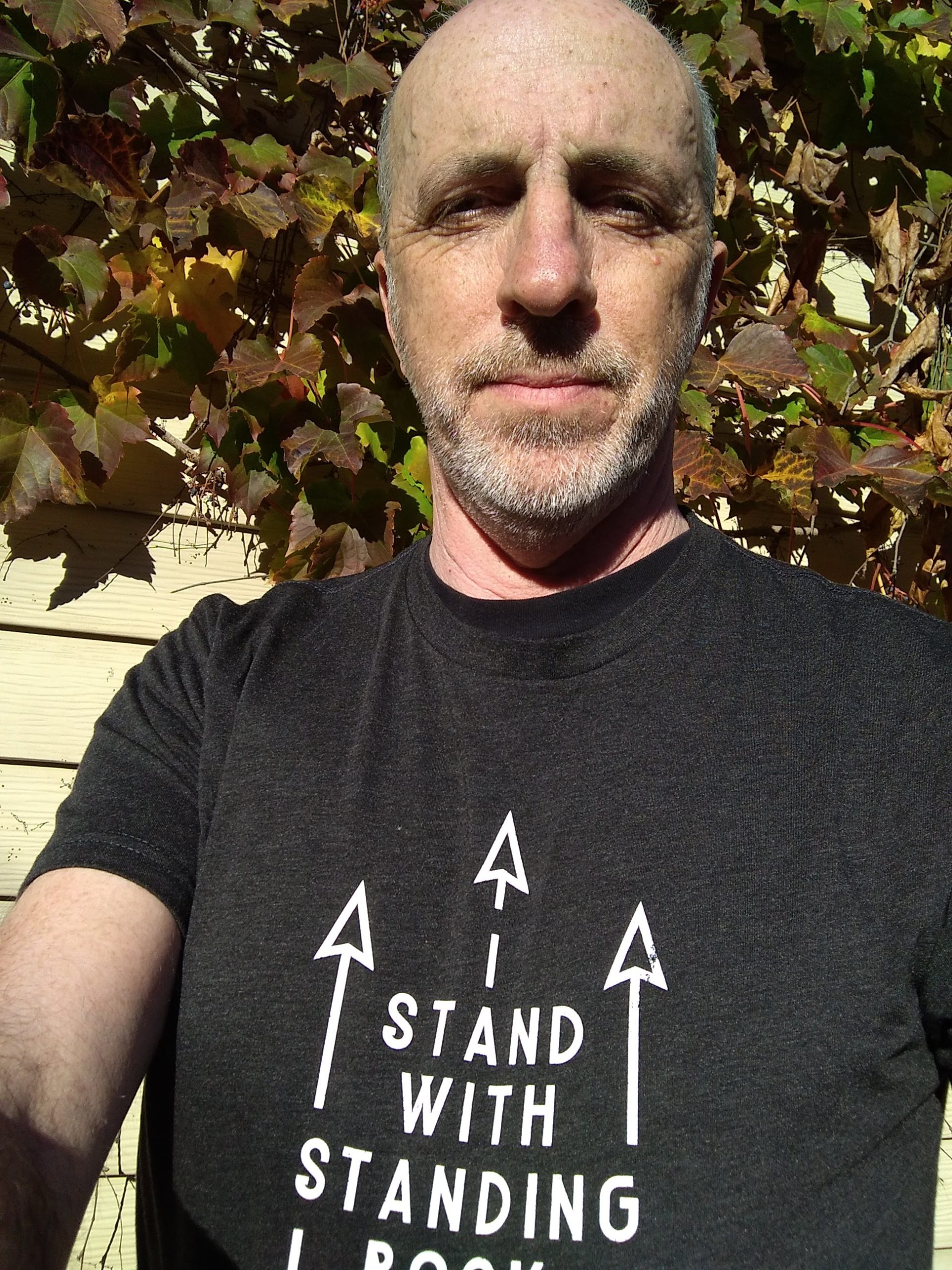 Ric Hudgens is an ordained Mennonite pastor who just completed five years on the pastoral team at Second Baptist Evanston, a 135 year old African American congregation. In September 2016 Ric became co-pastor of North Suburban Mennonite in Libertyville, Illinois. Ric has been a resident at Reba Place Fellowship in Evanston since 1990.

On October 22, 2016 Chief Arvol Looking Horse, 19th Generation Keeper of the Sacred White Buffalo Calf Pipe Bundle, called upon religious leaders of all traditions to come to Sacred Stone Camp and join the young people standing in prayerful protest against the Dakota Access Pipeline. On October 25, Rev John Floberg of the Episcopal Diocese of North Dakota reiterated this call to clergy, inviting us to come on November 2-3 for “protective witness in solidarity”. Rev Floberg expected perhaps 100 clergy but by November 2 over 500 had arrived from all parts of the country, representing over 20 different denominations and faith traditions.

Last week, alongside my friend Dr Timothy Eberhart of Garrett-Evangelical Theological Seminary, I travelled in a caravan with seminarians from Evanston, Illinois, to the Oceti Sakowin camp south of Bismarck. We set up tents after dark, unable to see the literally thousands of others camped beside us.

On Wednesday night, Regina Brave, an Oglala from the Pine Ridge Reservation in South Dakota, took the microphone at the gymnasium where clergy gathered and told us, “We knew you were coming; that one day you would come here and start asking questions about your government. We are all children of God. Black, red, yellow, white, are all represented.”

It was this sense that we were coming in response to their prayers that grounded this experience for me. I do not comprehend all the reasons that it was right for us to be there. We were answering their prayer. We were responding to the call of God. We were accepting an invitation. We were standing in solidarity with them, with all of you reading this, and with God’s creation.

Katerina Friesen described the late September delegation of Mennonites who stayed at Sacred Stone Camp.  Since their visit, tensions have increased along the river with several encounters between Water Protectors and Oil Protectors. A week before we arrived, armed soldiers and police in riot gear had removed Water Protectors from a new encampment directly in the proposed pipeline’s path. In an ironic reversal of neo-colonial practice, the Tribes claimed eminent domain over this land under the 1851 Treaty of Fort Laramie.

Last Wednesday morning, Water Protectors attempted to construct a wooden footbridge across the Cannonball River in order to establish a prayer camp on the sacred hill near Cantapeta Creek. Law enforcement responded by using mace, pepper spray and rubber bullets upon the Protectors. SWAT officers in a boat tore the footbridge away with a rope. It was a remarkable sight to see heavily armed police lined along the shore attacking unarmed peaceful and prayerful young people standing in the freezing cold water in front of them.

It is the Oil Protectors who look intimidated and afraid. The Water Protectors are prayerful, nonviolent, courageous, and determined. On social media, they are using perhaps the greatest hashtag ever invented: #SageAgainstTheMachine. For many Indigenous people, the herb Sage is sacred because of its cleansing and healing properties.

On Thursday morning before sunrise we awoke to the Elder’s Cry over the loud speaker: “Sun dancers, get up! Pipe carriers, get up! Christians, dust off your Bible and get up! You are here for a reason. The black snake is getting near the river. Get up and do something!”

On Thursday morning, the clergy gathered at the Sacred Fire which is constantly burning in the center of the camp. Representatives of major denominations that have formally renounced The Doctrine of Discovery confessed and apologized before representatives of the major tribes. The Doctrine of Discovery originated with the Christian church in the 15th century and declared any land uninhabited by Christians to be unclaimed land. For over five centuries, the DoD has legalized the theft of land and resources from indigenous peoples.

Facsimiles of the original Latin DoD document were ceremonially burned. We processed to the bridge where one week before a major confrontation had occurred and Route 1806 into the Camp had been closed. Our 1,000unarmed prayer warriors stood on one side of the bridge. A hundred heavily armed corporate warriors stood on the other.

Of the over 500 clergy represented, the majority were from mainline Protestant denominations (Episcopal, United Church of Christ, Methodist, Presbyterian, Lutheran). There was a sizable cohort from the African Methodist Episcopal Church. There were a few Catholics, Orthodox, Jews, Buddhists and others. At the roll call, I was the only Mennonite Church USA clergy responding.
We prayed. We sang. We preached. We testified. A few of us walked as far onto the bridge as Native security would allow and knelt to pray. Some travelled that afternoon to Bismarck where they occupied the state capital and several were arrested.

Upon our return home late Friday night I wrote this poem as both a reflection and prayer:

to an unreal world.

in the cold air

under the warm sun

waking from a dream.

Why are we so afraid

of the real world?

I once heard a scholar* say

An Inuit woman told him

their art takes something real

and makes it more real.

is a fantasy that may kill us all.

Our resistance is art.

Tell the earth you are awake now.

Listen for your God.

so we can find you.

to make the real more real.

*The scholar is Derek Rasmussen speaking on “Stemming the Tide of De-Indigenization”, Portland, February 2015 at a conference on The Economics of Happiness.