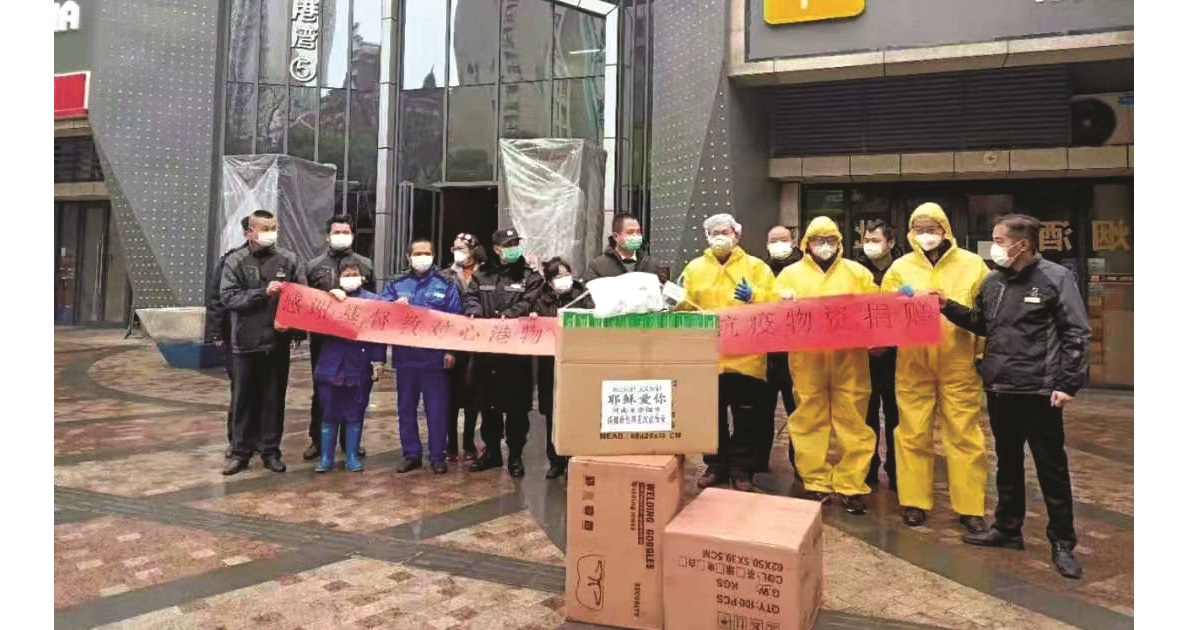 Photo: People from local churches pass out masks in Wuhan, China. The red banner thanks the benevolent society of the church for the supplies. The white sticker on the boxes says “Jesus loves you.” Photo provided by Mennonite Partners in China

Mennonite Church Canada reports that 10 North American English teachers serving with Mennonite Partners in China (MPC) have not been able to return to their placements in China due to the coronavirus outbreak, as the government puts restrictions on worship and public gatherings.

Three teachers are now back in the United States, while seven remain in Southeast Asia waiting to see if and when classes will resume. MPC director Myrrl Byler said several have been pulled into testing centers and quarantined for a short time because of their recent time in China.

The teachers and several Chinese colleagues left China in the middle of January for a midyear retreat in Malaysia. Plans to return to China for the beginning of university classes by the middle of February were put on hold as school officials requested they not return. Return travel is also complicated by canceled flights and travel restrictions.

Most of MPC’s teachers are in Sichuan province, which is adjacent to Hubei province, whose capital, Wuhan, is the center of the outbreak.

Six visiting professors from Sichuan at Eastern Mennonite University in Harrisonburg, Virginia, reported their families had to cancel New Year holiday celebrations, including a wedding planned for Feb. 1.

Tobia and George Veith, who serve with MPC through Mennonite Church Canada, were told by friends in their northeastern city that church services and public gatherings had been banned. The Veiths reported Christians in their city were encouraging each other with Psalm 112:7: “They are not afraid of evil tidings; their hearts are firm, secure in the Lord.”

Byler wrote in a Feb. 15 email that with people secluded in their homes, online interactions were increasing as churches were no longer physically gathering for worship services.

“Churches are posting worship services on their websites, with music teams singing and pastors preaching,” Byler said. “Listeners post responses to the sermon, chat about what God is teaching them and ask questions — something not commonly done face-to-face in large churches. Some churches that had restrictions placed on their websites during the past few years now report that they are able to post.”

MPC is responding to a request from partner churches in Fujian province. Byler said former MCC IVEP participant Spencer Li is now an intern at Virginia Mennonite Retirement Community in Harrisonburg and is leading an effort to send medical supplies.

MPC made a $2,000 donation to support the project, which is being carried out by a church network that includes Pastor Shen Yun, who graduated from Eastern Mennonite Seminary.

“The funds were used to purchase masks and then sent to churches in Wuhan who are distributing masks on the streets, accompanied by signs expressing God’s love for people and offering words of encouragement,” Byler said.

Mennonite Church Canada invites prayer for ministry partners and for all of those in China and around the world who have been affected by the virus.

Mennonite World Conference made a similar call for prayer after the World Health Organization declared the outbreak a global health emergency on Jan. 30. MWC called for congregations to unite in prayer and take precautions.

“Pray for people who are isolated, afraid or ill, especially in Wuhan, Hubei province and mainland China,” said MWC general secretary César García. “Pray for wisdom for Chinese government and health authorities working to contain the outbreak and for courage, compassion and safety for health-care workers who work tirelessly to save lives.”

In the face of rumors, misinformation or stereotyping of people with Asian background, MWC called upon congregations to think critically and avoid sharing unconfirmed news.

“Fear perpetrated by misinformation about the disease is spreading faster than the virus itself,” Deacons Commission secretary Henk Stenvers said. “This not only causes unnecessary panic, it also adds a burden of education to an already overworked health system.”