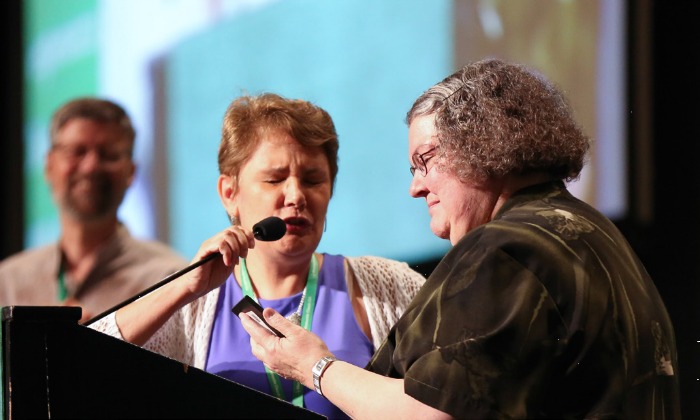 In the midst of passing two resolutions unanimously, Mennonite Church USA delegates also encountered the pain of disagreement in their midst in the final delegate session of Kansas City 2015 on Saturday.

Patricia Shelly, moderator-elect, opened the session by acknowledging there “is deep pain among our LGBTQ brothers and sisters over some of the decisions we have made here.”

Then moderator Elizabeth Soto-Albrecht held up two name tags to represent individual delegates, both progressive and traditionalist, who had chosen to leave the meetings because of the votes on Thursday regarding forbearance and the membership guidelines. She had them placed on the Christ table in the center of the room to symbolize the pain of disagreement among them.

That pain became even more evident later in the meeting, when Soto-Albrecht announced that “our sister Valerie” and a sister from Iglesia Menonita Hispana (IMH, Hispanic Mennonite Church) wanted to share something.

A man who is a delegate spoke first.

“We are family members of LGBTQ individuals who celebrate who they are,” he said. “I did not expect to feel such sorrow.”

He asked anyone to stand who had relatives or acquaintances who have are LGBTQ and have felt pain from the church. At least half the people in the room stood.

“My daughter is not allowed to submit her MLI,” said another person.

Another said, “The Confession of Faith says God accepts all who come to him. I lament that families are divided.”

Another said, “I lament I was not allowed to stand in support of my brother. The silence is deafening.”

Another said, “The Confession of Faith says we believe God has created human beings in the divine image. I lament that my son is being reduced to an issue. I don’t want to be reduced to [being the] mother of an issue. My son is a human being.”

Another half dozen or so spoke in a similar vein before Soto-Albrecht said they had to move on to other topics because time was short. She allowed one more person to speak.

Many supporters of those speaking cried, “No.”

Then Madeline Maldanado, moderator of IMH, said that IMH is beginning a process of discernment about the future of its relationship with MC USA. They will hold a special meeting before the end of the year. She asked for prayer.

The delegates then moved to other business. Later, Shelly said they had agreed to give the LGBTQ individuals five minutes to talk, and when they decided to cut off the sharing, she said, they could not see how many remained at the microphones.

Before this, delegates discussed a “statement of support for our Palestinian and Israeli partners.” Rod Stafford, pastor of Portland Mennonite Church, said the statement is “meant to fill the void in the next two years and communicate our commitment to our partners in Israel-Palestine,” where Mennonites have worked for decades.

After some discussion, the delegates passed the statement, with no objections and two abstentions.

Next, Ken Thompson, pastor of Friendship Community Church, Bronx, N.Y., introduced a resolution from the African-American Mennonite Association called “Expressions of Lament and Hope,” which, in response to the murders in Charleston, S.C., and the burning of African-American churches, called on Mennonite Church USA “to pray for the victims’ families, the local ministries in the communities where these atrocities occur, and the lives of our brothers and sisters living under the threat of violent, malevolent, and menacing spirits of hatred and oppression.”

Further, it said, “Mennonite Church USA and all its parts will continue to build awareness and direct resources and energy to continued anti-racism education among our constituencies and to stand in solidarity with the African-American community as destroyed properties are rebuilt and ministry occurs to broken bodies and souls.”

The antiracism task force presented its report of how well the convention did. Among its many observations was the following: “The delegate sessions, where voting power lies, was primarily white. Out of 800-plus delegates, not even 10 percent were people of color. Racial inclusion at this convention was outside the delegate hall. Until the delegate session looks a bit more like the seminar and learning sessions, no real change will occur in the broader church.”

In her closing remarks as moderator, Soto-Albrecht said she’s glad for the people of color who are in leadership in Mennonite Church USA. “We are not to place minority groups against each other,” she said, or place the LGBTQ group against people of color groups.

Our communion is a gift, she said, “a calling, an open space where we can feel safe to disagree.”

She added that “Latinos have been guilty of breaking unity.”

Further she said, “We have done peace work around the world but have failed to do it here among us.”

Before passing the baton to Shelly as the new moderator, Soto-Albrecht danced to salsa music and invited everyone in the room to join her.