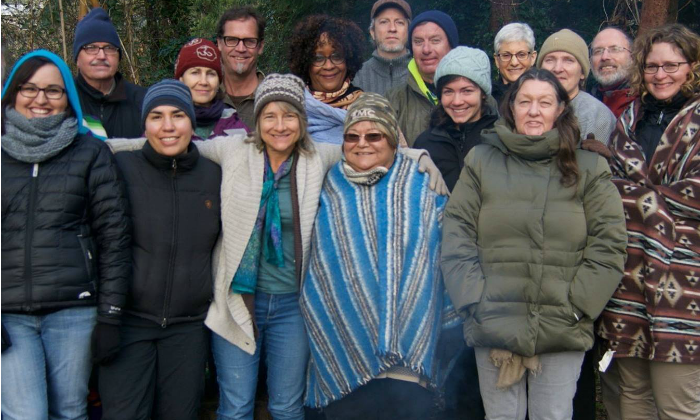 The group’s website defines the Doctrine of Discovery as, “a philosophical and legal framework dating to the 15th century that gave Christian governments moral and legal rights to invade and seize Indigenous lands and dominate Indigenous Peoples. The patterns of oppression that continue to dispossess Indigenous Peoples of their lands today are found in numerous historical documents such as Papal Bulls, Royal Charters and U.S. Supreme Court rulings as recent as 2005. Collectively, these and other concepts form a paradigm of domination that legitimates extractive industries that displace and destroy many Indigenous Peoples and other vulnerable communities, as well as harm the earth.”

The group started its meeting led in ceremony by Sarah Augustine, one of the founders of the Coalition; Steve Darden, Human Rights Commissioner for the Diné Nation; and Mark MacDonald, Bishop for Indigenous Peoples for the Anglican Church of Canada and also President for North America for the World Council of Churches.

“We began in ceremony because we believe our work must be led by the Spirit,” said Augustine. “We have to be grounded in connection with the Creator, seeking harmony with the Creator and each other. It is tempting to jump into a full agenda straight away, but we want to affirm and nurture what we have in common–a thirst for justice fueled by discipleship.”

The group spent significant energy discerning the best way forward in a movement that brings the interests of Mennonite organizations and the urgency of prophetic voices into alignment. What emerged was an alliance of invested organizations and individuals who will contribute resources and personnel to the Coalition. The Coalition, led by a steering committee, will coordinate a variety of sub-committees and projects that include:

Sheri Hostetler is pastor of First Mennonite Church of San Francisco and a member of the Coalition steering committee.