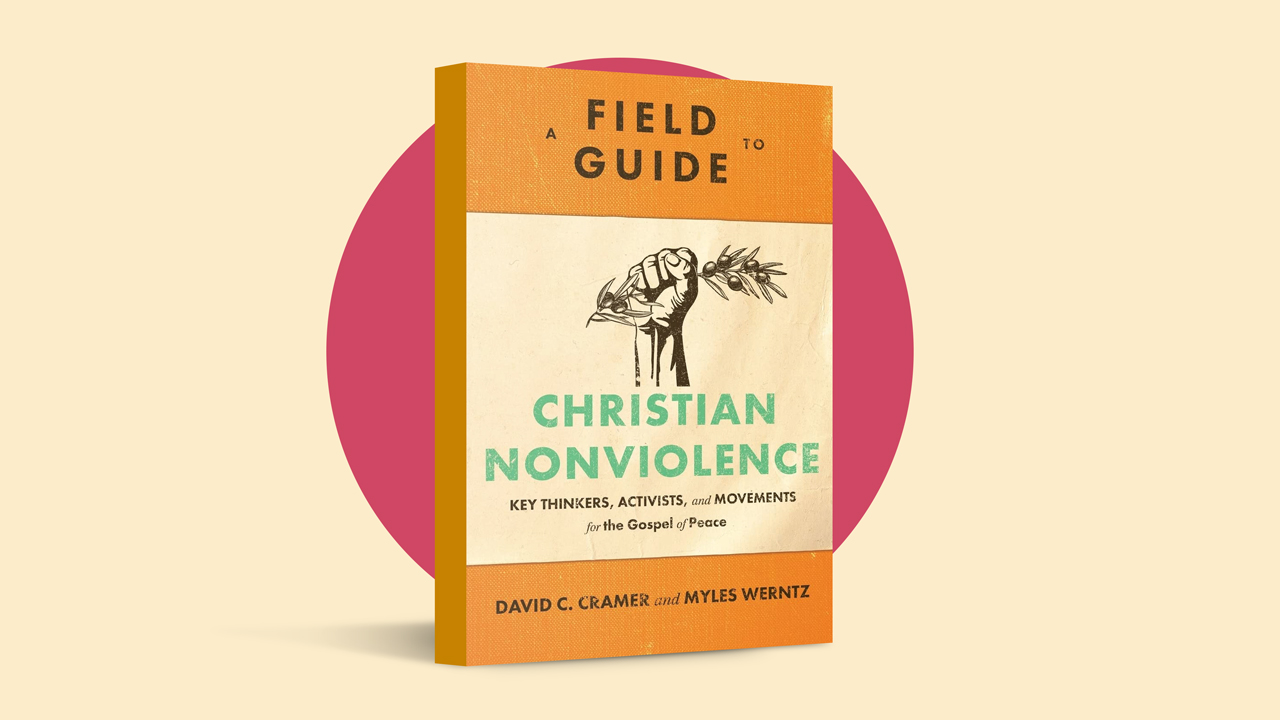 A Field Guide to Christian Nonviolence: Key Thinkers, Activists and Movements for the Gospel of Peace by David C. Cramer and Myles Werntz (Baker Academic, 2022)

Like the word “peace,” “non­violence” carries different meanings. It invites several questions: What is violence? How does one oppose it? Is that done only individually, or does it involve social dimensions?

In their new book, A Field Guide to Christian Nonviolence, David C. Cramer, managing editor at the Institute of Mennonite Studies, sessional lecturer at Anabaptist Mennonite Biblical Seminary and teaching pastor at Keller Park Church in South Bend, Ind., and Myles Werntz, associate professor of theology and director of Baptist studies at Abilene Christian University, add the adjective “Christian” and explore various approaches to the subject.

They state their thesis up front: “Christian nonviolence has never been monolithic but has always included merging and diverging streams; it is therefore best understood as a dynamic and contested tradition rather than a unified and settled position.”

Their aim is not to persuade or to argue for or against nonviolence but to describe the tradition of Christian nonviolence. They look at eight major streams of that tradition and point out that these streams “are not meant to be mutually exclusive but often overlap and diverge.”

The first stream is the nonviolence of Christian discipleship, which involves following Jesus’ commands and emphasizes “habituation, communities of formation and discipleship.” This stream, promoted by John Howard ­Yoder and others, is perhaps most familiar to Anabaptists. However, ­Cramer and Werntz write, it is the stream “most in need of critical scrutiny.”

Second is the nonviolence of Christian virtue or becoming a peaceable people. In this approach, becoming a person of virtue is inseparable from enacting nonviolence, though people such as Dorothy Day and Stanley Hauerwas differ on what that involves.

Third is the nonviolence of Christian mysticism. This involves the invitation to dwell in the presence of a peaceable God. Thomas Merton, Henri Nouwen and Howard Thurman are among its proponents.

Fourth is apocalyptic nonviolence, or the struggle to expose the power of Death (capital D). This is typified by the Plowshares movement and its witness against nuclear weapons.

Fifth is realist nonviolence, which works at creating a just peace in a fallen world. The Center for Justice and Peacebuilding at Eastern Mennonite University is one example, and John Paul Lederach is a significant figure.

Sixth is nonviolence as political practice or bringing nonviolence into the public square. Martin Luther King Jr. and the civil rights movement exemplify this approach. While similar to the realist approach, it is not willing to make nonviolence negotiable.

Seventh is liberationist nonviolence, which seeks to disrupt the spiral of violence and is identified closely with Latin American liberation theology. This approach was developed to address particular social, economic and political realities in Latin America.

the final stream is Christian anti-
violence, or resisting sexual and ­gender-based violence and the structures that enable it, especially within the church. “As women are empowered in the church and society,” Cramer and Werntz write, “they are leading the way in resisting not only sexual and gender-based violence but also the ­violence of war and genocide.” Examples are Liberian peace activist Leymah Gbowee and Ellen Johnson Sirleaf, who was elected president of Liberia in 2005.

In discussing each of these streams, Cramer and Werntz draw on many sources and show how each stream includes differences and draws on other streams. In their concluding chapter, they apply these various approaches to the doctrine of creation. “For Christian nonviolence to live into the future,” they write, “it not only must address itself to the old ways of violence . . .

but also must include a vision for addressing the corruption of a shared creation.” Ways of addressing this will be “enriched and deepened by learning from the various streams of this book in their own light.”

As I read the descriptions of each of these streams, I felt myself affirming what they brought and seeing how I’ve been influenced and enriched by each of them. Cramer and Werntz have provided a helpful tool in understanding the complexity of Christian nonviolence and how we might practice it more faithfully and effectively. They write that peacemakers’ on­going need “will not be a single, unified form of Christian nonviolence but a proliferation of new forms, each drawing wisdom from the past while looking ahead to ever-evolving challenges.”