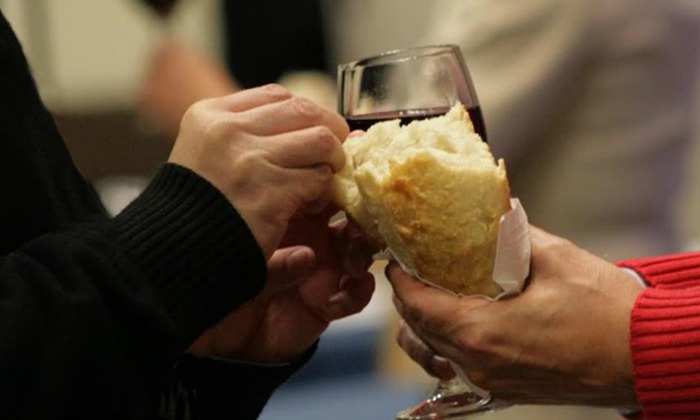 On Tuesday, Nov. 8, churches across the country will participate in Election Day Communion, a national movement to unite Christians of all denominations, despite political differences.

“The practice of communion is an inherently political act,” wrote co-founder Mark Schloneger, pastor of North Goshen (Indiana) Mennonite Church, for CNN’s Belief blog. “It is both a pledge of allegiance to Jesus and a declaration of independence from all other powers making claims on our bodies, minds and souls.”

In 2008, the first Election Day Communion was held at Springdale Mennonite Church in Waynesboro, Virginia. In the next four years, a group of Mennonite and Episcopal leaders, Schloneger; Kevin Gasser, pastor of Staunton (Virginia) Mennonite Church; and Ben Irwin, a lay Episcopalian minister from Grand Rapids, Michigan, turned the idea into a movement.

In 2012, 900 churches participated from all 50 states. This year, the movement has grown exponentially.

“We know that churches across the country, from almost every Christian denomination, will be participating,” said Jason Boone of the Peace and Justice Support Network, who took leadership of the movement. “Many will let us know they are doing so and many won’t. We’re just happy to have the opportunity to support and encourage both the Mennonite and broader church in this act of allegiance to Jesus.”

Faith Presbyterian Church in Indianapolis is among the many who plan to host communion. Pastor Charlotte Lohrenz thinks the importance is two-fold for her politically and theologically diverse congregation. “It’s a reminder that God is in charge,” she said. “That doesn’t absolve us of our responsibility, but helps us see where we fit into God’s purposes.”

Despite the differing opinions, Election Day Communion reminds people that “we all still worship Jesus Christ,” Lohrenz said. By participating in civil interactions, it allows people to get out of their “political silos,” she said.

Boone acknowledges that fear and mistrust seem to fuel this political season. “Election Day Communion is a chance to choose a different path. A path that pledges allegiance to Christ, to the ways of peace, and celebrates the unity that is still possible.”

Election Day Communion invites every follower of Christ to participate regardless of political party or denominational affiliation. For more information, or to find participating churches nearby, visit www.ElectionDayCommunion2016.com. Election Day Communion is organized by the Peace and Justice Support Network, a partnership of Mennonite Church USA and Mennonite Mission Network.