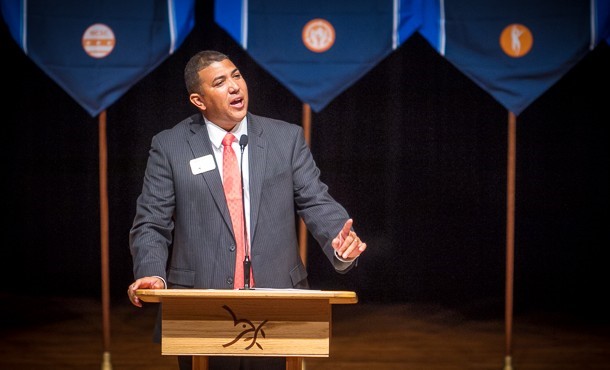 Update:  A district court judge in Harrisonburg, Va., dismissed the solicitation of prostitution charge against Luke Hartman on March 29, according to WHSV-TV reporter Katie Caler. The judge dismissed the case because the statutes for the charge were not met when a specific act was not discussed before money was allegedly exchanged. Read the full report.

Luke Hartman, vice president of enrollment at Eastern Mennonite University (EMU) in Harrisonburg, Va., was charged Jan. 8 with solicitation of prostitution. In a statement released Jan. 9, EMU announced Hartman’s suspension, effective immediately. Hartman was one of 10 individuals charged as part of a sting operation conducted by the Harrisonburg Police Department and Rockingham County Sheriff’s Office.

According to Lieutenant Chris Rush of the Harrisonburg Police Department, Hartman was charged and released with a summons to appear back in court at a later date. In a Jan. 9 phone call, Rush said that this undercover operation was part of ongoing investigations in the Harrisonburg area.

Hartman began his role as a vice president at EMU in August 2011. Prior to this role, he served as assistant principal at Skyline Middle School in Harrisonburg and an educational consultant for Harrisonburg City Public Schools.

Hartman also served as associate director of admissions, men’s varsity basketball coach and taught in the education department at Hesston (Kan.) College from 1996-2004. He was also a popular speaker at Mennonite Church USA conventions, speaking most recently at the Phoenix 2013 gathering.

In a Jan. 8 email to members of the EMU campus community, President Loren Swartzendruber acknowledged the media reports of Hartman’s arrest and wrote, “I invite your prayers for EMU leadership, Luke, and his family as implications are processed.”

Carlos Romero, executive director of Mennonite Education Agency, echoed the call to prayer for the Hartman family and also urged members of the Mennonite community to pray for EMU. “This is a very difficult time,” said Romero in a Jan. 9 phone call. “It’s a time when I would invite everyone to pray for President Loren Swartzendruber and all the members of EMU’s community.”