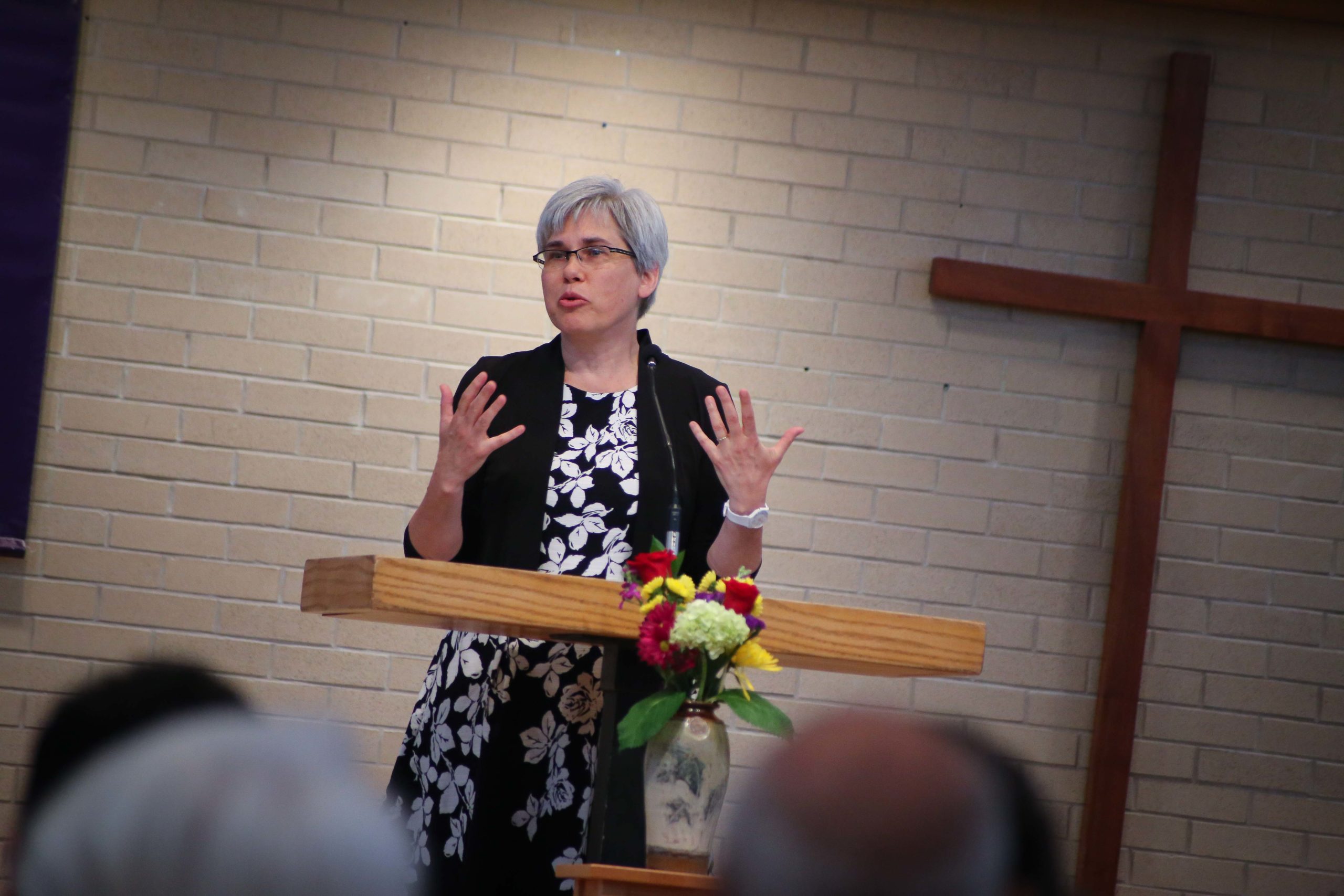 Photo: Rebecca Stoltzfus speaks to the Goshen College community June 14, 2017, as she is introduced as the presidential candidate of choice. Photo by Brian Yoder Schlabach/Goshen College.

Editor’s note: This is the third article in a seven-part series by the presidents of Mennonite Church USA higher education institutions. From March to May an article by each president will be posted every two weeks. The entire series is available at themennonite.org/mhea. Sign up for our TMail newsletter and follow us on Facebook to receive the articles.

Excerpt from MHEA vision statement Rebecca is focusing on: Within communities of learning oriented toward biblical visions of shalom, [students] are formed in practices of nonviolence and peacebuilding and are prepared to confront racism and other forms of discrimination, practice restorative justice and offer hope for the healing of brokenness and division.

I am writing this after several days of hard news. A self-proclaimed white racist recorded himself on social media as he carried out a horrific massacre of Muslim worshippers in Christchurch, New Zealand. And a massive multi-year college admissions scandal was exposed. (You can read more about my anger about that scandal here.)

Our world is deeply broken and in need of healing. I believe Mennonite higher education matters very much to these issues.

My journey to Goshen College

I attended Goshen (Indiana) College from 1979 to 1983, and during those years I began to forge an adult Christian faith. I became an active member of a Mennonite church and was excited and transformed by the radical discipleship and welcoming community both at church and on campus. In college I found my voice, sometimes acting in concert with faculty, and other times resisting them. I explored worship, Scripture, pacifism, Christian community and the “Upside-Down Kingdom.”

Since then, I have been a professor and researcher at two universities: The Johns Hopkins University in Baltimore, Maryland, and Cornell University in Ithaca, New York. I have taught and led collaborative research to advance the health of women and children in low-resource communities globally. As an educator and administrator, I have particular experience in experiential and global teaching and learning. I enjoyed my work at Cornell immensely and will always be grateful for the opportunities I was given there.

In January 2017, I received a phone call and then a visit from the co-chairs of the Goshen College presidential search committee. There began the most intense discernment process I have ever engaged. I began as president of Goshen College in November 2017. The transition from Cornell back to Goshen was in some ways natural—in the words of one of my colleagues at Cornell, “I was made for this.” In other ways, it was an enormous leap and one of the scariest decisions I have ever made. And now there is no place I would rather be.

Most fundamentally, what brought me back to Goshen College is the possibility of education that integrates reason and love. As stated in the Mennonite Higher Education Association vision statement, an education for the healing of our brokenness.

The events of this week reinforce this for me. We need education that forms interfaith and intercultural understanding, that teaches nonviolence, that demonstrates integrity and that courageously creates access for talented youth from all social classes.

What we do at Goshen College and in all of our MHEA schools is vital to the church and to the world. As a divinely beloved and deeply broken human species on a fragile planet, we need education that equips our graduates with more than knowledge and more than privilege.

The MHEA statement envisions education oriented toward the biblical vision of shalom. This vision can only be sustained through transformative redemptive love, for which Christ is the source and sign and story. What our youth are hungry for is not the dogma of religion, but the experience of Christ in the world.

Peter Petkau, a student speaker in our 2017 baccalaureate worship service, pointed out that when Jesus said Christian faith is like a mustard seed, Jesus was referring to an irrepressible and invasive weed. Perhaps like me, you know more about dandelions than mustard vines. Think about it: every Goshen College graduation is like blowing on a head of Gospel-laden dandelion seeds.

And so, further compelled by this week of scandal and tragedy, I commit to leading Goshen College to be a community of personal, spiritual and social transformation. Goshen College must liberate students from personal and systemic ignorance and oppression, educating them to see oppressive structures and systems and equipping them to transform them in creative and life-giving ways. Such an education is both Christ-centered and cosmopolitan, sitting confidently in the crossroads of pluralism in 2019.

I commit to leading Goshen College to recruit and retain a vibrant student body, responsive to our new and distinctive mission, that is diverse in race, religion, ethnicity and family income. After the news of the Christchurch shooting unfolded, we reached out personally to each of our Muslim students, and later gathered at the peace pole where our student ministry leaders led a lament for the victims with tears, prayer and singing.

I commit to leading Goshen College to be a formative place, rooted and centered in Christ, that welcomes students who do not know Christ, who are skeptical of the Christianity they have seen thus far, who are curious about Christ or who are passionate disciples of Christ. And I hope that through Goshen College, each of our students will experience Christ and Christian faith lived out, and be personally transformed by it.

And I commit to my own Christian faith through congregational life, worship, prayer and life in the Spirit. I know that the dandelion seeds planted in me at Goshen College keep sprouting up in each new season of my life. I’m here because I am joyfully submitting to them.