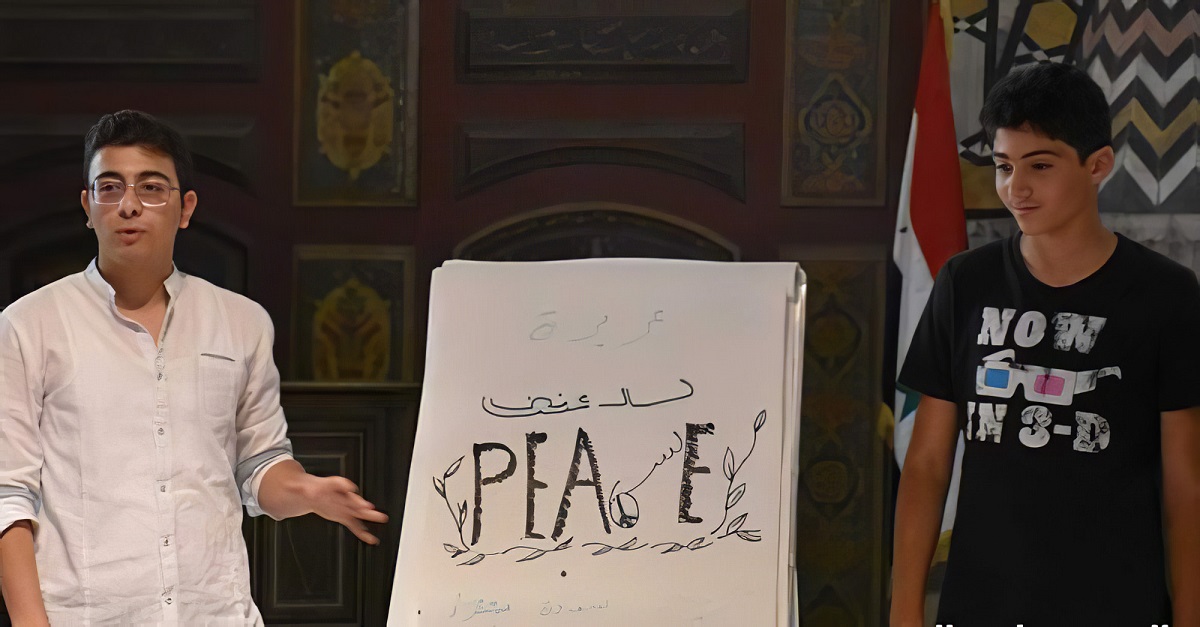 A presenter (left) with “Change4Peace,” a Syrian civil society organization, stands with a participant during a peace dialogue session in Damascus, Syria, in Fall 2019. Their names and the organization’s actual name are withheld for security reasons.

Photo: A presenter with “Change4Peace,” a Syrian nonprofit organization, stands with a participant during a peace dialogue in Damascus, Syria. (Their names and the organization’s actual name are withheld for security reasons.) At these sessions held in fall 2019, youth discussed the definition of peace, the role of young people in building peace and how to start a peace initiative. Photo provided by Change4Peace.

With a $1.3 million (994,000 Euros) grant from the European Union, Mennonite Central Committee (MCC) is empowering organizations to implement peacebuilding projects across four Middle Eastern countries. MCC and its partner, Development for People and Nature Association (DPNA), will use the funds to support the work of 17 nonprofit organizations as they counter religious intolerance and promote peace between faiths in their communities. The three-year grant, “Promoting Religious Tolerance and Mutual Understanding within and between Faiths in Lebanon, Syria, Jordan and Iraq,” began in 2018 and will conclude in 2021. Six of the organizations are from Lebanon, five from Iraq, four from Jordan and two from Syria. They work with people of many faiths including Shia and Sunni Muslims; Christians from Catholic, Maronite, Orthodox and Evangelical backgrounds; and people of minority sects like Alawites, Druze and Yazidis. MCC and DPNA, a Lebanese nonprofit organization that promotes sustainable development, are supporting the organizations through advanced peacebuilding training, capacity building, direct mentoring and networking. In addition, the organizations are using the grants to support local peacebuilding projects. The projects are helping to restore relationships that have been strained by years of conflict throughout the region. The Middle East continues to experience numerous conflicts, including the civil war in Syria and protests against the Iraqi government. The region’s diverse religions often play a role in these conflicts. Garry Mayhew, an MCC representative for Lebanon and Syria, said the initiative is currently MCC’s largest peacebuilding project in the region. “The overall impact we are hoping to achieve is to reduce religious violence and enhance mutual understanding and respect between faiths,” Mayhew says. Following an August 2019 kick-off conference hosted by MCC and DPNA in Lebanon, the 17 organizations began taking steps to implement their new projects. Although each peacebuilding project is unique, all share a common theme of empowering religious leaders and laypeople, especially women and youth, to understand and respect people of other faiths and promote religious tolerance within their communities and spheres of influence. Ardi Association, a Lebanon-based nonprofit, launched a peacebuilding workshop that included 80 students from four schools. The workshop helped students explore how to accept religious differences. “Change4Peace,” an organization in Syria, included youth from different religions in two dialogues on the definition of peace, the role of youth in building peace and how to start a peace initiative. Change4Peace also conducted two workshops about nonviolence and conflict transformation. Other organizations are still preparing to launch peacebuilding projects that engage participants in unique ways. One project will include designing and installing a mural, another will lead tours to cultural heritage areas that reflect different faith traditions and a third plans to invite young adults to organize a social media campaign for community events that promote peace. “Peace is not something that can be imposed from the outside,” Mayhew says. “Instead, we trust that just like the tiny mustard seed, the impact of this project will be far-reaching, beyond what we can currently envision.” Note: Because of the coronavirus, most activities, except those that can be carried on virtually, have been suspended temporarily until people can meet together again.