John D. Roth | Institute for the Study of Global Anabaptism 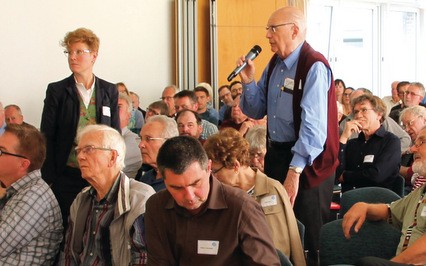 MÜNSTER, Germany — In the city infamous as the site of an attempt to establish an Ana­bap­tist kingdom by force in 1535, more than 100 people participated in a conference on “Mennonites in the Era of National Socialism” Sept. 25-28.

Organized by the Men­no­nit­ischer Geschichts­verein (Ger­man Mennonite Historical Society), the event marked the first public occasion since the end of World War II that Mennonites from Germany, Switzerland, Paraguay, the Netherlands and the former Soviet Union spoke openly about their experiences.

Along with a series of academic papers, numerous eyewitness participants shared — sometimes with deep emotion — the trauma they experienced while also acknowledging the extent of Mennonite complicity with the ideology, goals and actions of National Socialism under Hitler.

Astrid von Schlachta, president of the historical society, opened the conference with a striking photograph of a vast crowd of people saluting Hitler with extended arms. On closer inspection, one can see a lone individual whose arm remained resolutely at his side.

How, she asked, are we to understand the many reasons that prompted the crowd to join in their collective enthusiasm? More important, what were the motivations — and the potential costs — associated with the action of the lonely dissenter?

With that image, von Schlachta framed the primary questions for the conversations that followed, while also emphasizing that our access to the past is always limited and that our moral judgments should be expressed cautiously and with humility.

In general, conference presentations confirmed arguments that scholars of National Socialism have made for a long time. National Socialism, for example, was not a terror regime forced on an unwilling populace. Nor can the blame for German militarism, anti-Semitic prejudices and the Holocaust be restricted to a few elite leaders. A significant majority of Germans, including most Mennonites, enthusiastically welcomed Hitler’s rise to power after the elections of March 1933.

In the 12 years that followed, few German Mennonites expressed public doubts about National Socialist ideology. To be sure, some Mennonites joined the medical corps instead of the Wehrmacht. Some continued to insist on affirming rather than swearing in oaths of allegiance to the Third Reich. But in general, the conference concluded, German Mennonites were simply “equal among equals” (Gleicher unter Gleichen) in terms of their support for National Socialism.

Many participants acknowledged that speaking openly about the wartime experiences of their parents — and particularly the topic of Mennonite complicity — has been taboo for 70 years.

The fact that so many participants at the gathering spoke openly about these themes, in measured tones, underscored the significance of the gathering.

Ben Goossen, a graduate student in history at Harvard University, opened the presentations by tracing the way in which Mennonites in the late 19th century increasingly sought to identify themselves as full participants in the emerging German nation. As the principle of nonresistance became weakened — first in Prussia and then in Germany and the Ukraine after World War I — Mennonite self-identity as a community set apart (Völklein) increasingly became absorbed into racialized understandings of the German nation as a separate people (Volk). By the late 1930s, Mennonites, particularly the German-speaking colonies in South Russia, had become exemplary embodiments of Aryan racial supremacy.

Imanuel Baumann, a Baptist historian from Berlin, followed with an analysis of how a growing spirit of nationalism emerged among a group of Mennonite young people who shared their thoughts on German politics in various “circle letters” (Rundbriefe) in 1933, the year National Socialists came into power. In general, the letters expressed a strong sense that the state ruled by divine authority, a tacit acceptance of anti-Semitism and a deep antipathy to Communism — shaped, in part, by stories of suffering of Mennonites under Stalin in Russia.

Hans Joachim Wiebe elaborated on this same phenomenon with an analysis of school textbooks introduced in German schools after the Nazi rise to power, showing how they were infused with the ideology of National Socialism.

In an essay on the Herrnhut community — a movement of Pietist Christians with some ties to the Mennonites — Hedwig Richter made it clear that Mennonites were not the only minority religious group who enthusiastically supported Hitler’s cause. Richter reminded listeners that obedience is always granted to those in authority. As with Mennonites, theological themes central to Herrnhut identity were subtly reworked to fit into National Socialist ideology. Thus, the biblical motif of a “called-out people” became an argument for Aryan supremacy; references to the blood of the martyrs fused into the language of racial identity; church festivals and rituals were transformed into celebrations of the German nation.

Other papers explored the response of Mennonite communities outside of Germany. Daniel Stahl summarized the complex debate within the Fernheim Colony in the Paraguayan Chaco regarding National Socialism. Alle Hoekema surveyed the Dutch Mennonite response to Hitler’s policies, highlighting various initiatives to assist Jewish refugees fleeing the Holocaust. Hoekema’s paper was a sobering reminder that resistance was possible, though for some Dutch Mennonites it came at the cost of their lives.

A sense of disappointment and pain was expressed by Rolf Schowalter, who had recently read through a large collection of letters from the front written by his father Paul Schowalter, who later served as a longtime Mennonite pastor in Weierhof. To his surprise, those letters expressed great enthusiasm for Germany’s military advances, particularly against Russia, and a deep hatred for France, despite the fact that he had relatives living in Alsace.

Joachim Wiehler, who grew up in Tiegenhagen, also read excerpts of letters by his father, who served as a highly decorated officer in the Wehrmacht. Those documents repeatedly affirmed that Germany’s cause was part of a divine plan in which Hitler was a kind of German savior. Ortwin Driedger shared childhood memories of a long series of trains and wagons going by his house, transporting Jews to a nearby concentration camp at Stutthof.

“There was no question about what was happening there,” he said.

Driedger also recalled Jews from the Stutthof camp being forced to serve as slave laborers on surrounding farms, including those of Mennonites, and being locked into the stall of his family’s barn at night.

Arno Thimm movingly described his own childhood experience of being forced to flee their home in the village of Tiegenhof in January 1944 and the long and dangerous journey westward to Copenhagen.

Elfriede Lichdi recalled her childhood joy at being part of the Bund Deutscher Mädel and her commitment to numerous work assignments in support of the war effort, as well as a growing sense of fear and despair as the Third Reich began to collapse.

The conference included a screening of the Nazi propaganda film, Friesennot (Friesens in Need), depicting a German-speaking colony in South Russia struggling against the corrosive appeals to pacifism within their community and the threat of marauding Asiatic Bolsheviks outside the community. Although Marion Kobelt-Groch argued that the film was not explicitly referencing Mennonites, others noted that Nazi propaganda frequently identified Mennonites in Chortitza and Molotschna as ideal embodiments of German virtues, preserved in foreign settings.

Perhaps the most haunting themes raised by the conference swirled around questions of identity. To a large extent, German Mennonite identity in the 1930s was defined by blood and culture. Bolstered by a growing interest in genealogical research, Mennonites came to think of themselves as a distinct people, if not an actual race.

To the degree that we continue to speak of “ethnic” Mennonites today, are we perpetuating racialized categories of identity that emerge out of a very dark corner of our history? In a related way, the pressures to assimilate into the rhetoric and logic of our national culture continue to be powerful.

What are the subtle forms of complicity that are claiming our allegiances today? What accounts will our grandchildren give of our witness in the face of those pressures?