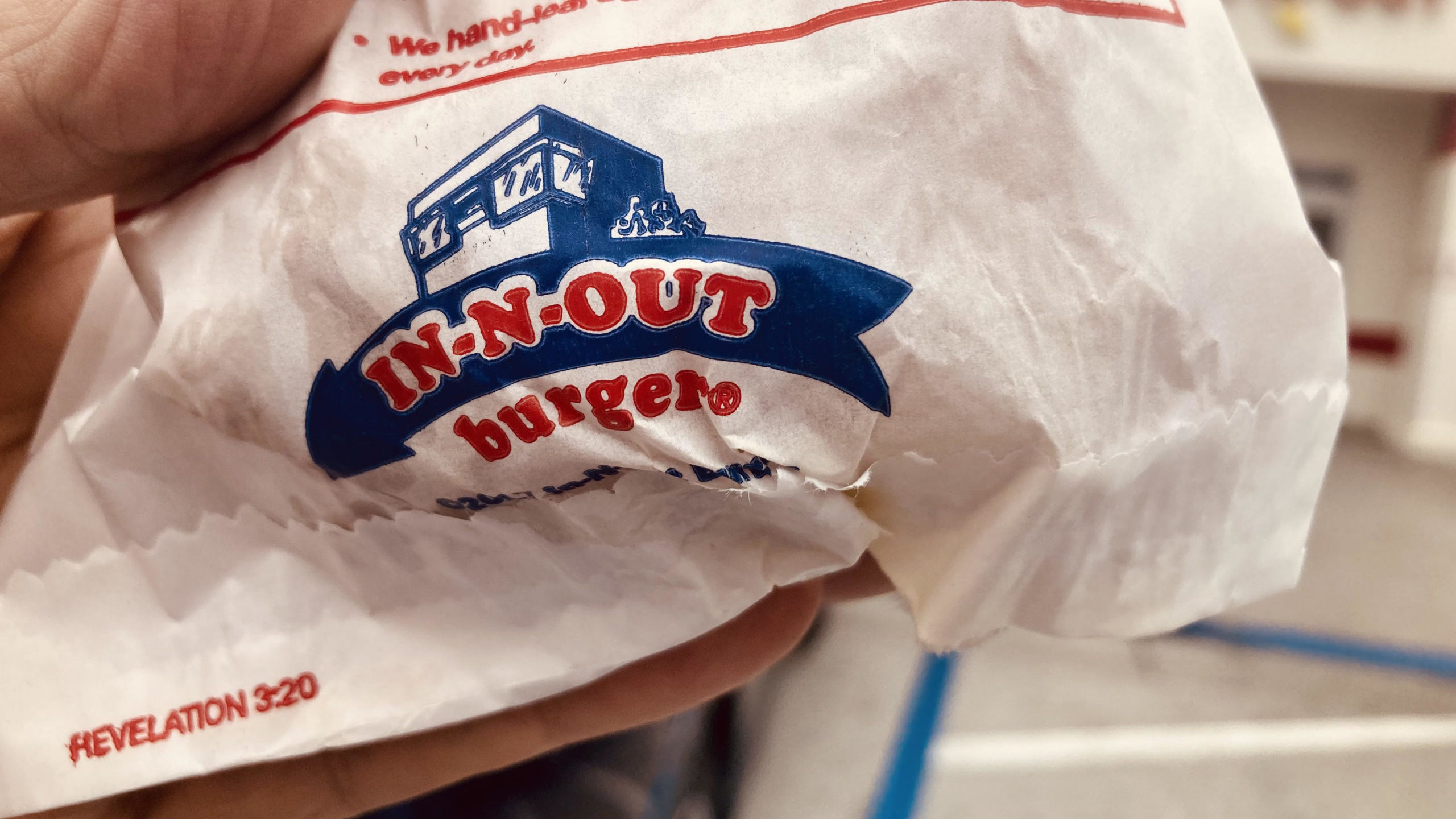 Covid controversies bring covert practices from under cover, like the conversations about selected Scriptural references on the bottom of the burger wrapper, the shake cups and potato fry containers that show concern for the soul at the same time the company is willing to put the body at risk. Our favorite California hamburger chain has long featured these references to salvation verses, but now In-N-Out is not complying with safety regulations for those who eat indoors.

Rev. 2:20 the text on my double double animal style hamburger at In-N-Out read and Jesus offers to come in and sit with those who open. In-N-Out Burgers has always had a half dozen “how to be born again” texts but not “You shall love your neighbor as yourself,” one of Jesus two favorites. What about the neighbor? How do we safeguard the other? How do we care for the security of the stranger? How do we put person above profit or politics in a time of pandemic? This company has always led the way in fulfilling cleanliness regulations, but now they refuse COVID guidelines. The issues seem to be about left and right rivalries. It has us talking about texts that mattered to the Galilean and should matter to us.

2. 150 years since the Chinese Massacre in the heart of (heartless) Los Angeles.

We attended the musical and poetic service of mourning on the green at Scripps College, Claremont. Professor Hao Huang drew together a multidisciplinary performance to commemorate this little known lynching of at least twenty Chinese Americans by a mob of nearly 500 people. We try to talk about it but few friends know our past, few recall the history of atrocity and inhumanity that marked our beginning, too few see the direct link to the injustices and racial inequities that continue today. We can’t keep from repeating the words of UN representative from Lebanon, Mohammed Safa,

“Our world is not divided by race, color, gender, or religion.

Our world is divided into wise people and fools. And fools

divide themselves by race, color, gender or religion.”

“Global Mennonite Encounter with Nazism” was the presentation by this scholar of our history during the Third Reich. The historical overlap between Mennonites and Nazism has been an untold story repressed with strong incentives to forget the dealings between MCC and Nazi authorities. Ben invites us to open our past and learn from the relationships that facilitated release and escape for some and less justifiable outcomes at other times. The way forward is sometimes away from our past and more often through our past as it teaches us to know ourselves. These learnings take some careful listening and self exploration.

4. The Warmth of Other Suns, by Isabel Wilkerson.

Wilkerson tells the epic story of America’s great migration out of Jim Crow south for decades after the civil war. The author of Caste, Wilkerson is one of the outstanding black historians who is opening our eyes of denial and distortion, Leann just finished the 550 page masterwork while we are watching the trial of three white men for the killing of a black jogger in Brunswick, GA who did not stop when the white man said stop. These are painful days if one takes what is assumed to be the rights of few as cultural givens. “Mercy,” David’s colleague Bill Pannell says repeatedly, “Mercy.”

It is the season for pears, (Why do we think of apples in Eden when the problem was the pair under the tree?) This recipe is healthful and heavenly. Four pears peeled, halved, cored, browned in an iron skillet in 2 T butter for 3 minutes or until caramelized on the surface, then baked at 400 degrees for twenty minutes, turning pears over at the half way point. Remove pears, place 1 cup unsweetened cider, 1 stick cinnamon, two star anise, 2 inches of ginger root crushed, ¼ cup dried cranberries, 1 tsp corn starch, dash of salt in now empty skillet. Reduce to ¾ cup then pour over fruit. Sprinkle with chopped toasted hazelnuts. Serve with blob of vanilla yogurt. One bite and you will know why we talk about this to friends.