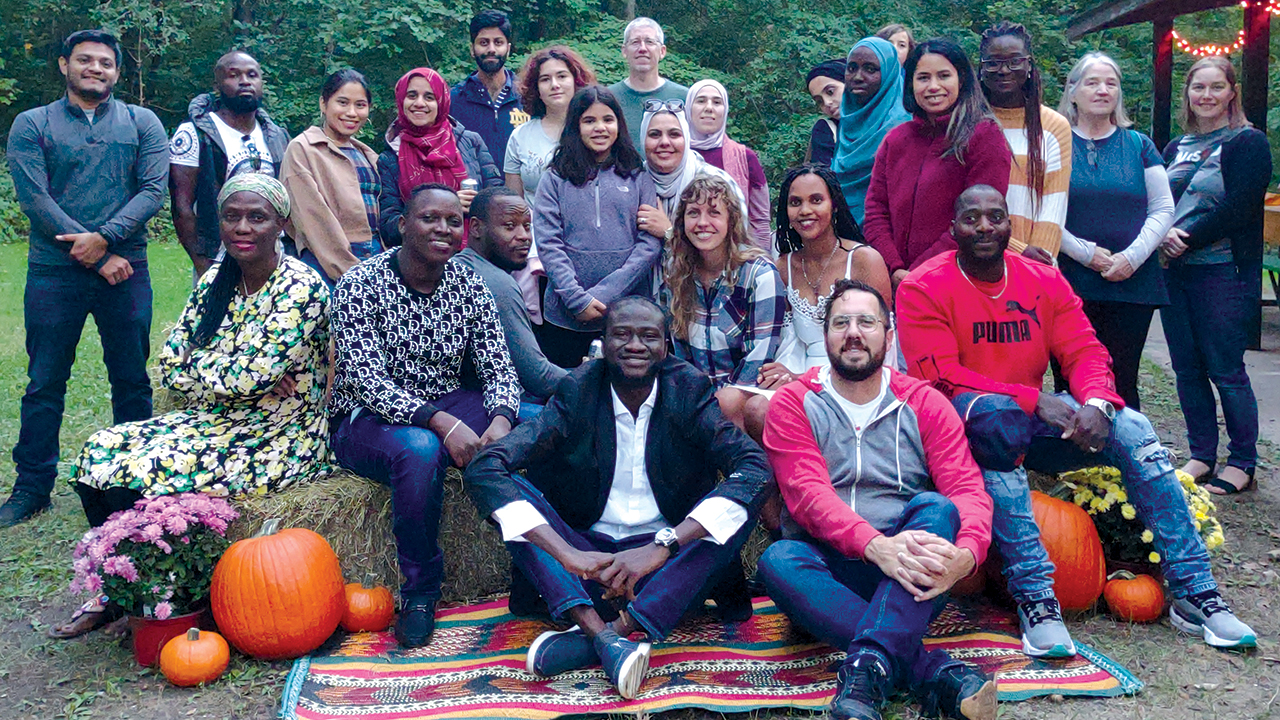 While pledges of welcome to refugees of the war in Ukraine fill U.S. headlines, churches and institutions are quietly working to resettle and acclimate households fleeing other longstanding conflicts, one family at a time.

A steady stream of asylum seekers at the nation’s southern border was joined in August by a spike in Afghan refugees after the U.S. military withdrew from Afghanistan. As the Taliban filled the void, people who had cooperated with occupying forces sought safety for their families.

“Within a few weeks, around 76,000 Afghans were evacuated. Various agencies around the United States were tasked with the monumental job of resettling them, and it’s not done,” said Charity Stowell, who was hired by Mennonite Central Committee U.S. in January for the new position of newcomer connections coordinator. “I believe there are about 20,000 to 25,000 Afghans still working their way through the pipeline. . . . That has needed a lot of church support.”

Organizations such as Church World Service receive federal funding to work with refugee and asylum resettlement when newcomers arrive, but the funding expires after 90 days. Support beyond that period can be augmented with fundraising or by partnering with other organizations — often churches.

Stowell’s role came about after MCC recognized it could help connect groups with Anabaptist congregations interested in lending a hand.

“Some of the churches I am talking to are becoming very involved in community sponsorship with a refugee agency in their area,” she said. “Or, for churches farther away from an agency, they do fundraising and gift card drives for agencies.”

Examples of recent activity include:

“We’re not doing the logistics of getting people here or even finding housing,” said director Andrea Cramer. “We call our work either post-resettlement work or kind of the long welcome. To be fully integrated into a new community and culture takes much longer than 90 days. It typically takes someone three years to feel like a new place is home.”

“Folks find themselves trying to navigate these systems in isolation,” Cramer said. “Neighbor to Neighbor works to walk with people to avoid the isolation that comes with culture shock.

“If the head of household — usually a man — is going off to work, they likely are the only one with a driver’s license. The spouse stays at home with kids and doesn’t get out.”

Cramer, a member of Keller Park Church and a student at Anabaptist Mennonite Biblical Seminary, had been teaching English as a second language for about a decade when she realized she was more drawn to building relationships than teaching. Relocating from northern Indiana to Waco, Texas, for her husband David Cramer’s doctoral program at Baylor University gave a taste of living in another culture.

“I started to do self-education around 2014, when the first wave of folks from [Central America] started coming to the border,” she said. “We called Catholic Charities to ask if a family could serve for a weekend in McAllen. That was our first face-to-face interaction with new arrivals. And then in 2015 the Syrian crisis hit our media, even though it had been happening for a while.

“I realized I wanted to do the work of welcome with displaced people.”

Among local congregations that have worked with Neighbor to Neighbor is Kern Road Mennonite Church, which has supported asylum seekers from Uganda. Since the U.S. withdrawal from Afghanistan, the organization went from a network of about 20 volunteers to training 80 new volunteers, mostly clergy and church members.

“Since the end of December, we’ve had 64 Afghans resettled here. That many in that short amount of time has been a lot,” Cramer said. “Housing is a huge challenge, especially because some of these households are really large, like 10 people. Finding housing that is available and affordable on one income is a challenge.”

With many agencies overwhelmed, congregations are more valuable than ever. Stowell said even small actions go a long way.

“Churches are usually encouraged to take the baby steps first,” she said. “Build relationships. It can be as simple as putting together hygiene kits or cleaning kits. That can really help mobilize a congregation to welcome refugees or to realize refugees are settling in the community. Something tangible can be a good way to start.”

With two children in tow, Fatima reminded Blough of her own daughter. Fatima noticed the sign in Blough’s front yard that said, “No matter where you are from, we’re glad you’re our neighbor.” She told Rhoda how much she liked that sign.

After exchanging phone numbers, the relationship grew as they shared food, laughter and stories — to the point that Fatima, originally from Afghanistan, told Blough, “You are my first American friend!”

Late last summer, Fatima needed a friend when the Taliban returned to power in Afghanistan. At that time, Fatima’s father was visiting the United States, but Fatima’s mother was still in Afghanistan, along with her brothers and sisters. Fatima was desperate to help her family find safety.

“The texts I received from her were just heartbreaking,” Blough recalled.

At first, there was nothing to do but pray that her mother and other family members would find a way into the Kabul airport to join the mass evacuation. Despite a traumatic experience navigating the airport, Fatima’s mother, nephew and two sisters-in-law safely made it there together. A few days later, with about 600 men, women and children crowded into a military aircraft, Fatima’s family was airlifted to Mumbai and then the U.S.

Throughout this stressful time, Blough witnessed Fatima and her husband do everything they could to help their extended family. Not only were they hosting evacuated family members in their home, they were also trying to find ways to help family still in Afghanistan who had lost livelihoods as a result of the Taliban coming to power.

“I knew there was no way I could turn my back on this family that I had grown to love,” Blough said.

Compelled by faith and friendship, Blough reached out to her family and church to join Fatima’s efforts. Once the members of Glennon Heights learned of the situation, they immediately responded with a desire to be a part of welcoming the newcomers.

With Fatima’s direction, Blough, her family and the church came together to pay the sponsorship application fees for Fatima’s extended family members. When apartments were located for family members, the church mobilized to furnish them.

“They needed things like desks, chairs, furniture and bedding, and the church just opened their arms,” Blough said. Deeply touched by the church’s generosity, Fatima and her family were surprised that people who didn’t even know them would help in so many ways.

In every community, there are opportunities to surprise newcomers with love and compassion. To learn how to welcome refugees, asylum seekers or other newcomers, contact Mennonite Central Committee at welcome@mcc.org.