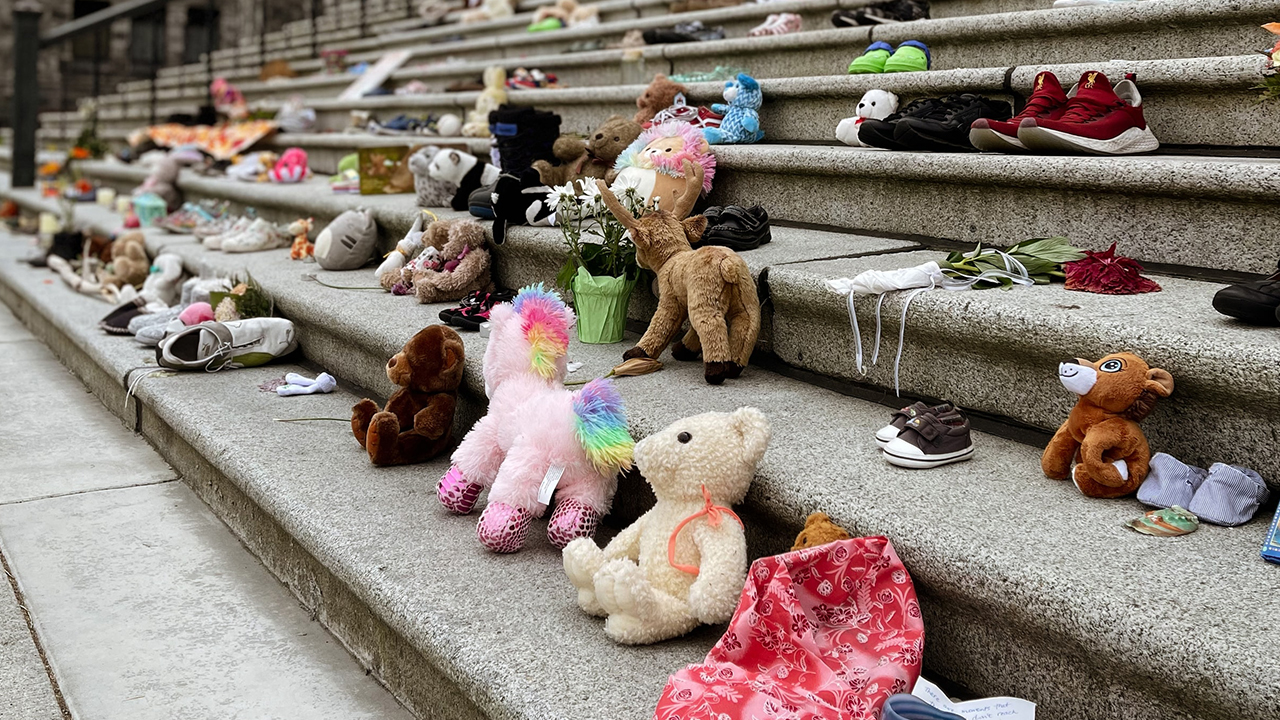 In recent weeks, the remains of more than 1,000 Indigenous children have been found at former residential schools in Canada. Residential schools were set up by the Canadian government to assimilate Indigenous children by separating them from their families and communities and Christianizing them. The Canadian government employed Christian denominations to run these schools from 1863 to 1998.

Boarding schools were intended as a tool of genocide — to permanently remove Indigenous peoples from their lands. While the Truth and Reconciliation Commission long suspected many thousands of Indigenous children died in boarding schools, authorities have been skeptical. Those who benefit from removal are often the ones to whom the impacts of genocide are most invisible.

As Indigenous peoples uncover the enduring impact of colonialism on their lands, communities and bodies, Christians are now turning toward lament. While making past harms visible is an important step in reconciliation, lament is often portrayed as deep sadness for things that happened in the past.

But the tools of genocide are many and ongoing. Lament is not enough.

By focusing attention on the past, we fail to acknowledge that systems of removing Indigenous peoples from their lands are still in force in North America and elsewhere. Jewish leaders in Brazil issued a press release in July explaining that genocide now taking place against Indigenous peoples there is comparable to the Holocaust: systematic state actions seeking total extermination.

Isaiah 58 explains that just a day of fasting, where people humble themselves in sackcloth and ashes (symbols of penitence and mourning), is not enough. Rather, to show repentance, we are to loose the chains of injustice and untie the cords of the yoke. We are to move beyond lament to actively seeking repair.

I have had the privilege to work since 2004 in partnership with Indigenous groups in South America’s Guiana Shield region (Suriname, French Guiana and Brazil). Like children in Canada and the U.S., children in French Guiana were forcibly removed from their homes at the age of 5 and Christianized in boarding schools — and many still are. Indigenous children who live in the interior rain forests of Suriname and French Guiana must still travel to boarding schools. One story shared with me involved a teenage girl who was harassed for her family’s refusal to Christianize. The family kept their native spirituality. Harassment proved lethal: The young woman committed suicide.

My friend milca, a Kalina woman in French Guiana, is working to undo the damage of boarding schools by reimagining education. A teacher, she explained to me how the public education she provided students in the capital city, Cayenne, was not serving Indigenous children. Searching for alternatives, she traveled to France and spent a year learning the Montessori method. It emphasizes student independence, encouraging children to initiate learning and master concepts by using materials common to their environment.

Rather than simply using standard Montessori materials based on tools of the dominant culture, Milca plans to create materials based on tools used in Indigenous communities. This will empower community-led education, where Indigenous culture is not only affirmed but at the heart of teaching and learning. This fall, she will open a Montessori school in Antecume Pata, a community in French Guiana’s rain forest.

By supporting Milca as an Indigenous leader, we can begin to undo a legacy of colonialism.
When we empower Indigenous-led initiatives, we move beyond lament ­toward repair. Reparative justice begins with acknowledging harm. The next step is to seek repair.

Isaiah 58 promises that when we loose the chains of injustice and untie the cords of the yoke, our light will break forth like the dawn, and our healing will appear.