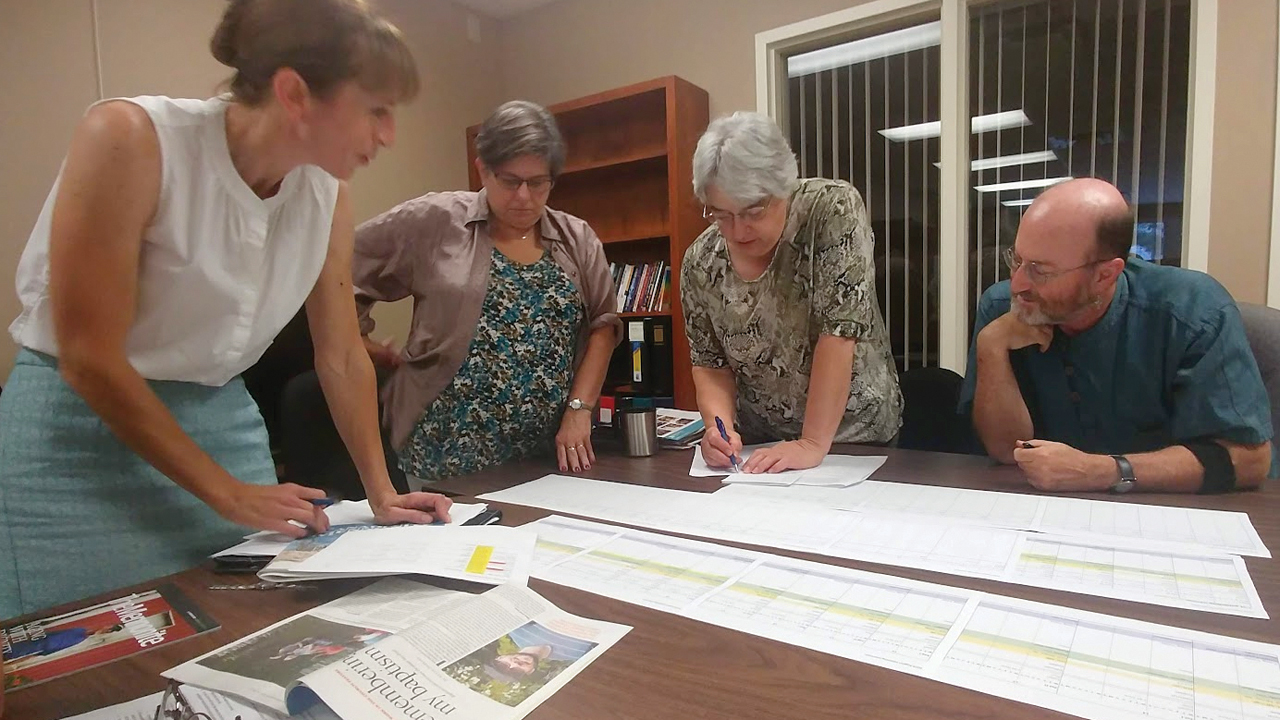 Faced with increasing costs and diminishing interest, two Mennonite conferences shut down their printed periodicals in 2019. But that doesn’t mean leaders stopped wanting to reach constituents with information and inspiration. Whether a denomination goes digital or continues to send magazines to physical mailboxes, communication remains a priority.

“It wasn’t just a financial decision, it was also a decision based on declining interest in the Herald,” said CCMBC executive director Elton da Silva. “The Herald went from having 15,000 copies distributed to I think we had 3,500 subscribers at the end of it. And it was costing us the same or even more because the price of printing had gone up.

“To maintain that was not good communication strategy. I think with staff and printing it was somewhere in the neighborhood of $250,000 a year.”

CCMBC experimented with digital newsletter options since the Herald presses rolled to a stop, but da Silva said conference staff were not content with such a means of reaching the denomination’s more than 35,000 members (with average attendance of around 50,000 in 250 congregations).

The latest option appeared in early September. MB Herald Digest was sent by email to Herald readers who had signed up for digital access, with the intent of sending a six- to 12-page PDF to readers monthly. For readers who prefer a printed product, CCMBC staff are working out a system for congregations to print out hard copies.

“It will contain a lot more information on the state of what is happening with the conference. We are trying out a new form of collaborative governance that engages all parts of the Mennonite Brethren in Canada, so this communication will be all parts, not just CCMBC,” da Silva said. “It will bring stories from the provinces and the seminary and Multiply [the mission organization].”

Like Canadian MBs, the Ohio-based CMC saw financial savings when it ceased printing Beacon magazine at the end of 2019. Formerly known as Conservative Mennonite Conference, the group spent more than $40,000 producing about 1,800 monthly print issues in 2019. It anticipates the cost of producing a digital Beacon this year will be less than $500.

CMC executive director Brian Hersh­berger said 79 of the conference’s 219 subscriptions were bulk, in which a congregation would receive several copies to distribute to members. CMC counted 13,623 members at the beginning of the year. In some cases, a church that might have once ordered 40 copies for church mailboxes may have decided instead to just order five to lay out on a table.

“For the last few years we were dropping an average of approximately 200 monthly issues per year,” he said. “We were not losing many individual subscriptions, but the churches kept cutting the number of issues they were receiving.

“For the past few years subscriptions were not covering the cost of producing the Beacon. CMC operates on a fairly tight budget, so it would have been difficult to continue absorbing a loss from the Beacon each year.”

Digital Beacon debuted in April at the height of COVID-19 shutdown orders. While Hershberger hasn’t heard much feedback from constituents about the printable PDF, it was apparent to staff this spring they could suddenly respond much more quickly to current events.

“Doing it digitally, we only need a couple of days to edit and lay it out, as opposed to the print version needing a month at least lead time on the articles,” Hershberger said. “That’s been really helpful to us for addressing coronavirus and racial tensions.”

Besides postage, much of the savings was realized by conference staff absorbing the work of editing, designing and distributing the new digital version.

To the south, the U.S. Conference of Mennonite Brethren Churches plans to continue the bimonthly Christian Leader magazine.

“We still have a lot of constituency that likes to receive the Christian Leader in paper form,” said national director Don Morris. “Our constituency is just not ready to go solely online, although we do have C-LINK, which comes out every two weeks online.”

Christian Leader came out monthly until 2009 and today reaches about 7,500 households in the U.S. and another 400 or so in Canada. Morris said it is “a good-sized investment” to spend about $92,000 — not counting editorial staff salaries — to reach USMB’s roughly 38,000 members.

“It’s much more economical to do it online, but it’s just not time for us, and it won’t be for a long time,” Morris said. “I don’t know how many people emailed when the Herald stopped, saying, ‘Please tell me we’re not thinking the same thing.’ ”

The Evangelical Mennonite Mission Conference magazine went bimonthly around the same time as USMB’s Christian Leader. Since 2008, The Recorder has been mailed every other month to EMMC’s roughly 7,500 members in Canada and Belize, while also posting all of its material online. The magazine is part of the conference’s budget, and every member receives a copy.

“We have readers who are well-educated and some who are less-educated, and English isn’t the first language for all our readers,” she said. “We’re trying to be everything for everybody. That’s hard, but we know we have to attract some of our younger readers for the health of our conference, so they’re aware of their church relationships beyond their little world, that they’re part of this larger body of churches.”

More recently, The Chronicle of Christian Mennonite Conference, a Canadian group, went from 12 to six issues per year. Executive secretary Clinton Friesen, who serves as editor, said most of the 600 to 700 copies are sent to churches, where each of the conference’s roughly 900 members receives a copy.

“We’re definitely discussing whether we want to keep doing it like this or do something online or a different style altogether,” he said. “There’s nothing set in stone.”

Every conference views publications as a way to connect with churches. It’s especially important for LMC, an Anabaptist fellowship that has grown far beyond the former Lancaster Mennonite Conference’s original Pennsylvania concentration.

In Mennonite Church USA, chief communication officer Wil LaVeist said the denomination continues to focus on how to communicate in the new ways people want to be reached.

“As we look to expand in the digital space in social media, or the website, or through podcasts and Facebook live, we also need to keep an equally sensitive and important eye on continuing to communicate in print media,” he said.

The Mennonite was one way to reach constituents in print, and LaVeist understands Anabaptist World will fulfill that role. There are no plans to launch a denominational print publication.

While every publication posts content online in some way, some use a hybrid approach, making as many as half of a year’s issues digital-only.

Canadian Mennonite serves Mennonite Church Canada’s 28,400 members with a circulation of about 8,900 in print and 1,200 digital. The magazine is biweekly, but since July 2019 four of the 26 issues are available only digitally.

Publisher Tobi Thiessen said the move to making some issues only available online prompted a number of people to sign up for digital delivery so they would not miss an issue. The digital version is not a printable PDF but a series of links that are easier to navigate on a mobile device.

“We have no plan to change the number of print issues or increase the number of digital-only issues,” Thiessen said. “We’ve heard a lot of feedback, especially through the pandemic, to keep the print edition. People get tired of screens and want a tactile product to hold. We’ve heard that, but it escalated in the pandemic.”

“Its purpose is to protect Canadian arts and cultural organizations, which includes magazines, to have a distinct Canadian identity so we are not awash in U.S. material,” said Thiessen, who noted the amount is equal to subscription revenue.

Other Canadian publications, such as MB Herald, received funds in the past but no longer met criteria. Canadian Mennonite continues receiving funds because it is independently governed outside denominational structures and requires readers to opt in annually.

“We have to show in a congregation that people are signing up,” Thiessen said. That is key because MC Canada’s regional churches (similar to MC USA’s area conferences) cover about $18 per church member subscription, and the national body throws in the remaining $7. This means Canadian Mennonite can receive payment for 80% of its subscriptions with only six invoices.

Evangelical Mennonite Conference used to receive Canadian government funding for a third of its budget, but when that ended about five years ago the conference re-evaluated how The Messenger could reach 7,800 members in 62 churches.

“We have split to a half-and-half digital/print setup,” said EMC assistant communication director Andrew Walker. “When I started [seven years ago] we were doing 12 print issues a year. Now we’re doing six, and in alternating months we are doing digital content.”

The Messenger used to have paid subscriptions, but now it is free for EMC members and has about 2,700 subscribers.