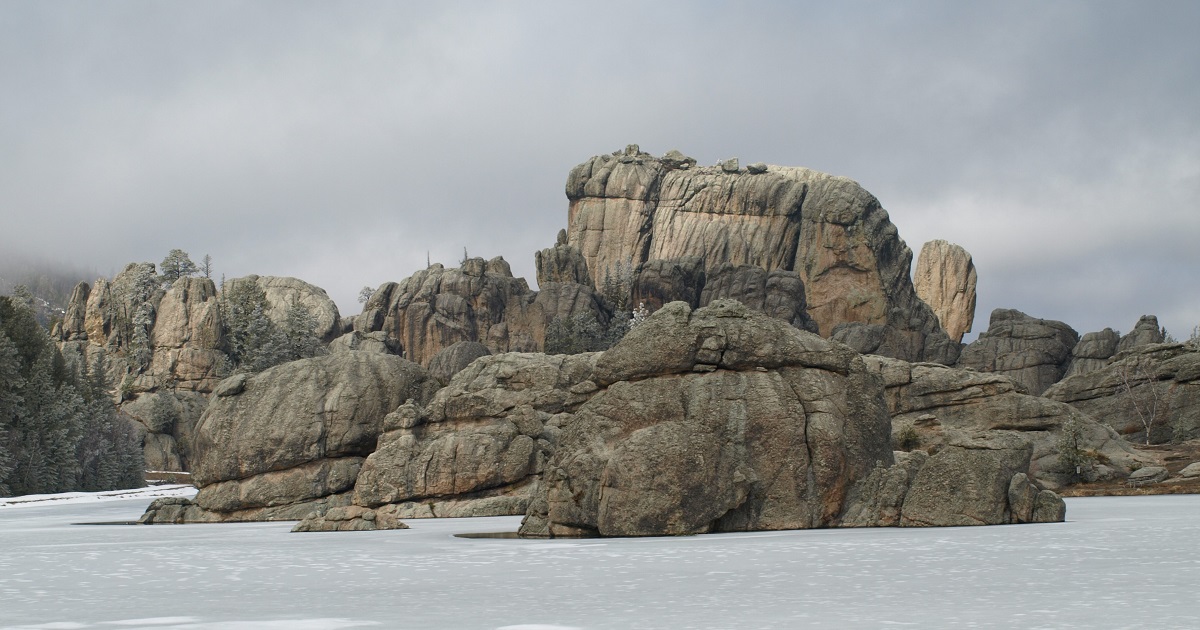 Photo: A scene from a hiking trip in the Black Hills in South Dakota. Photo provided by author.

This article comes from the July issue of The Mennonite, which focuses on “The Breath of God restores us.” Read more reflections here or subscribe here to receive more original features in your inbox each month.

I’ve shaken my fist at God quite a bit in my short life. Over the past four years, it has happened at least once a month, occasionally once a week and, in my darkest times, daily. What first frightened me—the thought of being raging mad at God—has become therapeutic: almost a spiritual practice. Yet this rage, pointed at God, always ends with the warmth of the Holy Spirit, beginning in my chest and radiating outward until I am again quieted and calm.

God has a sense of humor. This is apparent to anyone who has seen a platypus, looked at the arm length of a T-rex or journeyed away from God only to land right back in the middle of the church. I know what it’s like to be at the brunt of God’s jokes. While I imagine God as an ornery old relative, slapping her knee, coughing out through tears, “Ha ha, look at her now. She’s tried to run, and I made her a pastor,” the Holy Spirit remains a far gentler presence in my life. Perhaps that is why I struggle with accepting it.

Like Jacob on the banks of the Jabbok River, wrestling alone at night with God, I understand grappling. At the age of 18, I felt called to go to Anchorage, Alaska, for a year of voluntary service. And like the Israelites who brought God into battle with them against the Philistines only to have the Ark be captured, that year left me shaken: shocked and overwhelmed by a painful outcome I had not anticipated, lonely and ultimately feeling abandoned by God. As fervently as I tried to make the abandonment mutual—to walk away from God—it instead turned to anger, and I was left wrestling.

For a year and a half, I fought with God. I avoided church or went when dragged there, then left angry (often early). With great effort, I broke the habits of praying before bed and before meals. On the rare occasion I found myself seeking holy guidance on the major life decisions I made during that time, I stopped, shouted at God and made the decision my gut told me was wrong. When I ended up at Canadian Mennonite University in Winnipeg, Manitoba, I scoffed at the new student orientation beginning with a worship service and rolled my eyes when professors prayed. And that first cold, dark winter (worse than Alaska), as I learned a theology in the classroom that ultimately gave me the strength to break off a relationship that would have become an unhealthy marriage, I remained livid at God for exposing me to a way of orienting myself in the world that forced me to walk away from the man I loved.

Through all this brittle and brutal hardness, the Holy Spirit remained. There were moments when 606 (the hymn “Praise God from Whom”) broke out, and I felt lifted into the music and the memory of my childhood faith that accompanied the melody. There were times I stopped, bent over and breathless after a hard sprint, only to look up and see a sky full of stars that pulled my angry and broken gaze toward heaven. On a hiking trip, thinking out-loud, I realized that if God is Creator, she must be female, and for a brief moment I felt wholly understood in the sexual “rule-breaking” I had done to spite a controlling male God. On another hiking trip, the morning after a near-rape experience, I poured out my heart, sobbing down a foggy mountainside in streaming rain, feeling such gratitude and release from the night’s fear that I knew it must be God and me alone in the world.

Most critical to where I am today were the tuggings of the Spirit, brief but strong inklings within me that led me to sign up for ministry inquiry lunches, flip to the biblical and theological section of the course catalog and embrace feelings of wholeness and calling after pushbacks such as anti-LGBTQ comments, male peers telling me I could not be a pastor because I have a vagina and breakups that resulted from others’ lack of belief in climate change (and environmental stewardship as the role of the Christian).

I wish (maybe, depends on the day) I could say I lean fully into these moments with the Spirit, that I soak in these breaths of complete peace. On some level I do embrace them. Through these rocky years—the seven years of famine, as I refer to them—these moments have saved me. Although much of my story remains untold, there have been dark spaces where it almost ended. Yet the Holy Spirit, breathing the fierce and clinging presence of God into my life, held me fast. Giving me a glimpse of the kingdom of God through good company, washing me with the light of a prairie storm sky, allowing liturgy to hit just right. Each encounter with the Breath of God strikes me with hope too big to walk away from.

While these encounters are beautiful—healing, restorative, salvation right here—I rarely go seeking them and am no good at sticking around when they come. As I wonder at God’s creation, soaking in breathless moments in nature, I tend to think of the dishes left at home. As I ride on the grace of good times with friends, I notice a couple and come crashing back to my own singleness (and struggles of trying to date as a pastor). Even in the worship services that make the world feel whole, my anxiety always reminds me that the service—and the meaningful time being healed by the Spirit is—must always come to an end.

I know how to get along with God because I see my own self reflected in God: the image in a mirror. God—especially God before Jesus—is angry, occasionally petty, and loves a deep belly laugh. While the Spirit pulls out the parts of God that for years I struggled to see, the Spirit is good—wholly and irrevocably, sometimes painfully strong and gentle. The Spirit leads to healing, and it is this healing I yearn for. I yearn to be healed from becoming disheartened and angry at God when it feels like an impossibility in this still-so-broken world. And ultimately, when my voice is harsh and my fist is raised toward the sky, the Spirit picks me up and carries me home to the place of OK that lingers in my soul.

Elizabeth Schrag is a student at Canadian Mennonite University in Winnipeg, Manitoba.