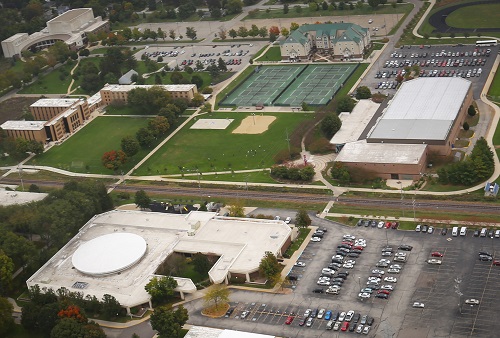 “Environmental sustainability is a natural priority for both Goshen College, which does so much to teach thoughtful stewardship, and for College Mennonite Church, which seeks to be a blessing in its community and honor our creator God in word and deed,” said David Lapp Jost, a 2011 GC graduate and a member of CMC who started this project and spearheaded fundraising. “In addition to saving both institutions tens of thousands of dollars annually for years to come, this project is a testament to deep shared values.”

Lapp Jost approached the college and church leadership about installing solar panels several years ago, but until recently the cost of solar panels and other budgetary and logistical concerns kept the project from moving forward.

However, through fundraising at CMC led by Lapp Jost, low solar prices and the college’s successful efforts to consume less energy, the timing made sense.

“It’s something we’ve wanted to do for some time － and it clicked－ Amity is the way to do this,” said Glenn Gilbert, director of facilities at the college.

Amity Corporation is an entity created by the college and church in 1989 in order to equitably make decisions about the jointly-owned Church-Chapel building’s use, including improvements and maintenance. Both CMC and GC share all Amity costs fifty-fifty.

“Goshen College is very pleased to play a role in this investment and because we have this joint responsibility for managing the Amity assets, we can enter this project as an equal partner,” Gilbert said.

The panels are schedule to be installed in March by Toledo-based Solscient Energy.

People at the church and college are excited to see this project take shape and see it as an important step toward a greener footprint, said Phil Waite, pastor at College Mennonite Church.

“We believe in the goodness of God’s creation and in God’s command to us to care for creation,” said Waite. “I am grateful that, through this partnership with Goshen College, we are able to substantially reduce our use of fossil fuels. We are, at least in part, fulfilling God’s call on us to care for creation.”